Wishing to do this badly for some time, I discerned highs of over 100 degrees, forecast for all of several days ahead. I gambled that my car was O.K., stopped my mail, paid my rent, and took off Thursday afternoon, the 14th. I purchased some shorts (9) at the Patagonia Outlet in Reno, NV, and sped onward to the interior of the Great Basin. I wished to try the main casino in Winnemucca, NV, for lodging. I was unable to sleep at all, due to the heat, or something, so resolved to take off at about 3 a.m., to make the long drive in the early morning. 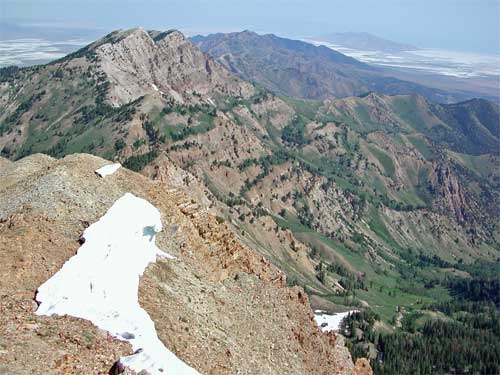 Drowsiness soon took over me, and I had to nap at the museum in Wells, NV. I did feel terrible, now. I was able to make the drive across to Utah, and decided to try to sleep better at my camp, near the trailhead for Deseret Peak. My directions were fair, but they got me there.

Biting flies and warm temperatures made this one of the most miserable stays. I rolled up my windows and slept in my car. Getting up early, Saturday, I knew a lot depended on how well I did. Failure would mean a probable, quick return home, defeated by my first peak!

Starting up the good trail by 6:06 a.m., I made some fair time. The trails were signed, thankfully, and I clambered upward. I applied plenty of DEET for the mosquitoes, and noted the many beautiful flowers. Some slide debris had to be crossed. I snapped away with my cameras, carrying three of them. Gaining altitude, I enjoyed the increasingly higher views.

Deseret Peak is the highest point of the Stansbury Mountains in Western Utah. It was to be hot in nearby Salt Lake City, but I had a good breeze. Reaching the main ridge, I saw the way up. Using my ice axe, I climbed directly up a 30 foot high snowbank, but hikers could go around this. The trail continues to the left, and I followed it to the top. My hiking roughly kept up a thousand feet vertical, per hour, pace.

Woe came to me as I was sadly overweight, out-of-condition, and certainly not acclimated. Starting each of my climbs with about a 25 pound pack, due to water, emergency gear, and my passion for cameras, I felt slow and tired much of the time. The thin air made me dizzy.

But Deseret Peak gave itself to me, and I savored the desert views. The nice trail goes all the way to the top, unlike as said in some now-outdated directions. The best view was to the north. I took photos, and then other hikers came up. No one else was having a great time, due to the heat, I think. I joked to another hiker that if I had any sense, I'd turn around and go home right now!

Descending, I snapped close-ups of the flowers. I liked the many columbines, white and blue, I saw on this trip. My two liters of water, today, had to be supplemented by snow, then I was down by about 1:30 p.m. Motoring off, I snapped pictures of the canyon narrows on the dirt road approach, then refreshed myself once back to civilization. Buoyed by this first success on a peak, I headed eastbound on Interstate 80.

I planned to hit Wyoming, this night, and see what came up for my sleeping. In Rock Springs, WY, the motels were full, or too much for me. I motored about town looking for a cheap room, but none were to be had. It was a weekend.

Awakening at a good enough hour, I felt better. I was on vacation! The Interstate ran true into the plains, and my first town stop was Rawlins, WY. Lodging was less here. I shot pictures of the old town, and did a few blocks of walking. Laramie, WY, is a better town. More upscale, I walked about again, and had coffee and food. Everyone was nice or pretty friendly, as on most of this whole trip. Great to see a professional demeanor as far as tourism! 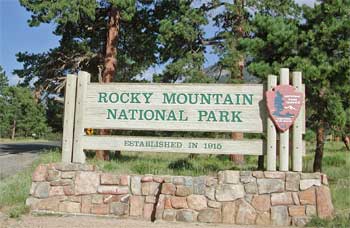 Continuing on to Cheyenne, WY, I did my repeated routine--to find free parking, then see the historic business sections on foot. Brick, sculptures, and logos made good photo interest. I had paid the least here for gas--2.209. I was counting on this. But still woozy from the traveling, I decided not to climb Longs Peak (14,255'), a Colorado classic climb. I obtained a motel room, and spent the evening seeing downtown Fort Collins, CO.

Getting up at a good hour Monday, I got my breakfast and headed for Rocky Mountain National Park. The park gateway, Estes Park, CO, is in a beautiful setting. Wishing I had more time, I headed into the park. I bought a park pass, which allows, then, free entry into all national parks for a full year.

The thing to do is to drive the Trail Ridge Road. This fine highway climbs up to 12,183 feet elevation, with vista points and short hiking trails to see the high country, here. I stopped at many places, and hiked the short trails. Photographing the alpine tundra with pretty flowers, I approached my top form, nowadays. Vacations should be to relax, as well as to be challenged!

Soon, the road continued downhill, west and south. Tourists were stopped for elk or moose. Not wishing to add to the traffic hazard, I motored on without photos. I was shortly out of the park, and wondered what to do with the extra time. I saw Grand Lake and Lake Granby, then passed through Winter Park, CO. This modest ski town offered drink and fast food. 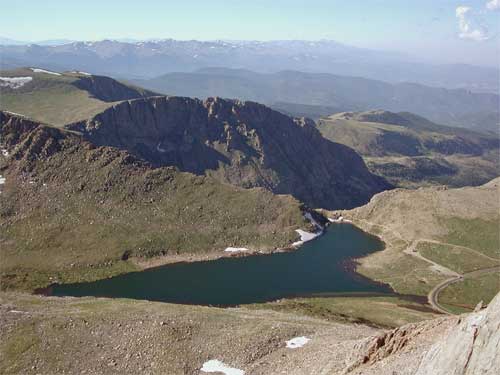 The sun was still high in the sky. Calculating, I would try for a drive up Mt. Evans. I made it to Interstate 70, then found the paved road that leads to the top. The books say to allow an hour each way. I motored up, excited at doing another Colorado 14'er. I increased my total count to 12 on this trip, but the local mountaineering club doesn't count ascents made by car or rail. But then, I am a member of the Hundred Peaks Section. It is stated that a climb can be done by however you can get up there. Good enough for me!

Denver was visible in the far distance. I took telephotos to be enhanced by software. Speaking with a ranger, I had hiked the quarter mile or so, highly graded trail to the rocky top. This was not exactly a drive-up! I snapped more summit view scenes in the late afternoon light. Summit Lake is in the photo (right). After a few more pictures, I then started down.

Back to Interstate 70, I sought food and lodging. Having a sandwich in Silverthorne, I headed south, in the dusk, on CO 91 for Leadville, CO. The highest town in the United States gave me an excellent acclimation op in the form of a highly affordable hostel. Did I sleep well!