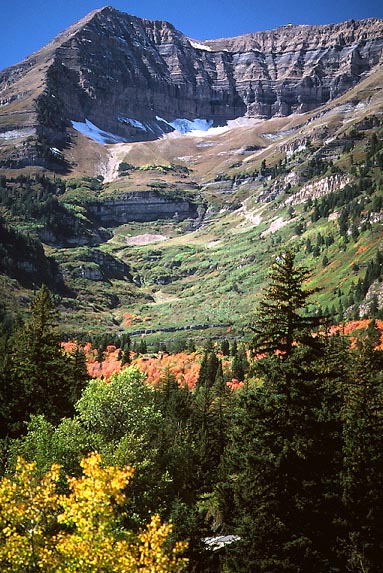 This eight day tour through the Desert Southwest netted only one peak, but it was a thrilling one.

I left home, Tuesday the 26th, and sped along I-80 to Lamoille Canyon in the Ruby Mountains of Northeastern Nevada. There, the fall colors mainly had not yet arrived, but I enjoyed the views.

Wednesday, after driving along I-80 and viewing the Stansbury Range, I gained information in Salt Lake City. I motored the local road into the Wasatch Range through Emigration Canyon. The maples were nicely red, as they also were in Parleys Canyon. I took I-215, then I-15 to the Alpine Scenic Drive starting near Timpanogos Cave National Monument. The aspen here had not yet turned, with the leaves said to be dying from the drought.

I visited Provo briefly, then headed southeast on U.S. 6, which was roughly scenic, despite the railroad tracks, power lines, and other industrial features. Some fall color was seen in aspen groves above Scofield State Park. The Price River Canyon above Price, UT, was interesting. Taking plenty of photos of the horizon-filling Book Cliffs, I was fortunate to see a herd of pronghorn antelope. I watched the sunset over pinnacles of the San Rafael Swell, from near Green River, UT, where I had earlier toured the John Westley Powell Museum.

Thursday, I made a quick tour of both Canyonlands and Arches National Parks. Visiting most of the major viewpoints, I hiked Upheaval Dome, Whale Rock, and Aztec Butte in the Island-in-the-Sky District. I gained a nice view of the Shafer Trail from near the visitor center.

In Arches, after seeing Balanced Rock, I did the short hikes to the North and South Windows, Turret Arch, and Double Arch, then hiked to Landscape, Navajo and Partition Arches. I finished the day going first to the Delicate Arch Viewpoint, then up the 1.5 mile trail to the arch itself. About sixty others watched and took pictures as the setting sun fell on what is said to be the most photographed arch in the world, in addition to its gracing many State of Utah license plates. I also shot many photos, and, after the show, spotted some bighorn sheep below the trail. 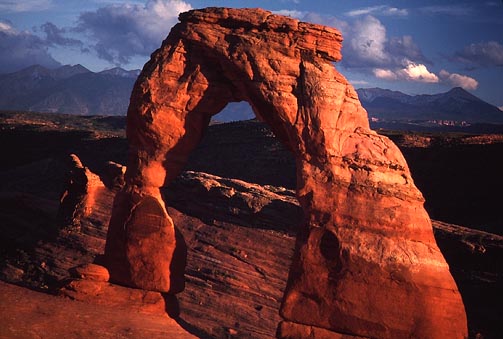 Friday, after staying in Moab, UT, I went up the Colorado River Canyon on UT 128 to see Fisher Towers. I came back to briefly tour Moab, then headed south on UT 191. Fall colors could be seen in the La Sals. Visiting Newspaper Rock, with scenic views of the Abajo Mountains, I decided in Monticello, UT, not to make a 300 mile side trip to Durango, Colorado, and the San Juan Mountains to the north and east. Large thunderheads loomed in the distance, and I foresaw rain there.

I auto-toured southwest in better weather through Bluff and Mexican Hat, UT, then over the San Juan River into Arizona and the Navajo Reservation to see Monument Valley. There, thunder boomed and rain fell. I was somewhat trapped in my car back in Mexican Hat for a bit by heavy, pelting rain, not wanting to get soaked.

The otherwise pleasant camping opportunity was passed to stay in a motel, which I always generally did on this trip, being the plans to avoid what I thought would be freezing nights.

Saturday, I headed north past the Valley of the Gods on UT 261 to motor up the Cedar Mesa bluffs, which offers views and interesting driving. Coming to Natural Bridges National Monument, I took in more views and some hiking to see the three main sandstone bridges, Sipapu, Kachina, and Owachomo, all formed by water.

Continuing northwest on UT 95, I passed Glen Canyon, the Henry Mountains, Hanksville, Factory Butte, and then drove along the Fremont River to Capitol Reef National Park. I took the 21 mile scenic drive, going to the end of the dirt road in Capitol Gorge.

Back to the main highway, I headed west along UT 24, and then south on UT 12, through the Dixie National Forest, and the eastern side of the Aquarius Plateau. Beautiful, high views to the east, and of turned aspen groves were assisted by the many scenic view parking sites.

I came to Grand Staircase Escalante National Monument in the late evening.

Sunday, after staying in Escalante, UT, I motored back to catch the sunrise at a viewpoint on the "hogsback," with vistas into the many canyons nearby. After more scenic views, with another stop in Escalante, I headed west to Kodachrome Basin State Park, then Bryce Canyon National Park. I shot a few photos from Sunrise Point, neglecting to ride the free shuttle buses to all of the main park sites. 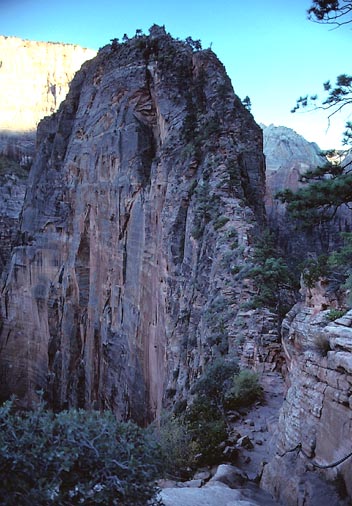 Continuing to Zion National Park, I found that auto travel access in the main canyon is now limited to lodge guests only. I took the free shuttle bus from the visitor center, and debarked at the Grotto stop. Starting my hike at 5:15 p.m., I chose the trail to the west rim and Angels Landing (5,990'). I moved briskly as I realized that I could bag this peak. I made the top of this unbelievable, narrow, sandstone fin after an hour and four minutes. The trail, below paved in sections, ascends up moderately steep, class 2 rock with chained posts for handholds past drops of a thousand feet. Warnings were given for those less adapted to "exposure (a rock climbing term)."

I was in peak heaven. My only peak ascent for this trip was done with such good speed, I sought to celebrate somewhere. But, due to the late hour, I chose instead to secure lodging and fast food in St. George, Utah.

Monday, after a drive southwest on Interstate 15, I could have ended the trip, but my photographic interests prompted a wait in Las Vegas for "magic hour" atop the Stratosphere Tower. I visited the new casinos Paris and Mandalay Bay. In the late afternoon, I motored west to Red Rock Canyon National Conservation Area, and took the nine mile scenic drive.

After a sandwich, I rode the high speed elevator up to the 108 story observation deck, where I took pictures of the deepening evening with the proliferation of lights and neon everywhere. This, being my third visit up this tower, was a fine cap to this desert vacation.

A short night's rest in Barstow, CA, was quickly followed by a morning drive home Tuesday.