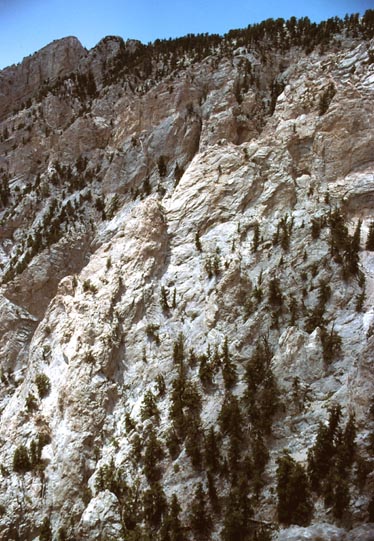 My peak climbing friend Fred decided that he was going on this Sierra Club activity. Three chapters, San Francisco Bay, Angeles, and Toiyabe, were sponsoring this joint trip. I was fortunate to be joining the group, having wanted to climb some of these peaks for a long time.

We carpooled and drove east, on the 26th, on U.S. 50, through the central portion of the State of Nevada. This was a day-long drive. We passed through the towns of Austin, Eureka, and Ely, Nevada, enroute.

We motored south from Ely to the roadhead in the Grant Range, up Scofield Canyon. Troy Peak was our first climb. Said to be John Muir's favorite Nevada peak, we would climb this on our own, before the official Club trip started. Driving up the rough dirt road as far as we could, we camped. Our guidebook directions were good. We used a luxury station wagon, which amazes me as what it can do.

The next day, Fred and I followed the guidebook hiking directions, which were sufficiently precise. We took the sagebrush-covered slopes to a high rock ridge, which I scouted, and found was O.K. We had good sights of Bristlecone pines and huge limestone cliffs on the way up.

After some three hours and fifty minutes, I reached the top. Fred came up a short time later. A small radio relay facility was sited just off the true highpoint. Our views were very nice. Looking through the register, I snapped a few pictures as record. The weather was clear enough, so we didn't have to rush due to oncoming T-storms.

Heading down, we came back to our car, and motored back down the rough road to stay at an official campground. It was gorgeous this evening, with sun streaming through big cumulus clouds. Distant desert ranges were all about us. 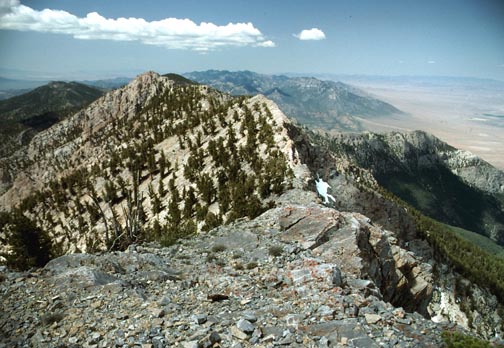 The next day, we drove out to the main highway, NV 318. A good food stop was located in the town of Lund.

Driving north, we headed for the Sierra Club trip meeting place. It was near a campground, on the way into the White Pine Range. Several persons met us there. Having most of the afternoon free for hiking, we climbed a small hill known as Corduroy Mountain. We had views of the peaks we planned to do the next day. Returning, the group had a commissary dinner. I picked a nice place for my tarp, sleeping bag, and foam pad, and had a good night's sleep.

We awoke early the next day. We drove a bit on rough roads toward the group's first major peak, Currant Mountain. A nondescript spot provided some space to park our trucks. The leader chose a cross-country route up to the left, or the south side, of the ridge. We passed big specimens of bristlecones. The rubbly, steep, loose rock made precarious footing. After a few hours, with some hikers turning back, we reached the main ridge, with a hill to cross over. We gained a first view of this class 3 route up Currant Mountain, which looked fearsome. The others were eagerly hiking to it, but I had some doubts. We didn't have a rope, and I cursed.

However, it was easy, looking far worse than it was. We scrambled up past this section, and then came to the summit. Our ascent time was written in as about 5 hours and 14 minutes. Looking through the register, I couldn't find the sign-ins of a local chapter group that claimed achieving this point a few years ago. This happens often enough to be suspicious. Others quickly say, "paranoia," if I have doubts. It would have to be a conspiracy, indeed.

We had lunch, then proceeded in a roundabout way to the second peak, Duckwater Peak. A tedious, cross-country traverse is necessary to get to the ridge to hike north upon. More class 2-3 hiking was necessary. Most of the group had enough. Only three chose to continue to the second peak.

Summitting Duckwater Peak in a couple more hours, we didn't stay long. The leader picked a steep, loose route down that took some time. It was scenic, though. Finally we were off the steep parts, and then to the dirt road. This we followed back to the vehicle parking.

Meeting the rest of the group at our car camp, we had our meals in the dark. I must have slept long.

The next morning, we drove into Ely for some resupply, and I visited a museum. Continuing, we came to a campground in the Schell Range, and readied for a climb to bag the Schell Creek Range peaks. This was to be a traverse, with a car shuttle required. Again, after a short hike, we had a camp cookout.

That night, it began to rain, then snow. I tried to stay warm and dry with a plastic tarp under a camping table roof, but my gear became wet. As the cloudy sky brightened, the light revealed a few inches of snow had covered the cars and the ground. Our climb was scrubbed. New snow on the high, 11,000 foot peaks would get everyone's light hiking boots soaking wet.

Fred and I left to drive back to Ely. We toured the town, in mostly sunshine, and I spent time at the library. We would just have to wait for the snow to melt. We drove back to the clouded over campground where the rest of the group stayed, and suggested a climb of Blue Eagle Mountain, which didn't have the snow. An associate living in Ely had told me of this. We all agreed to meet in the small town of Currant the next morning. Fred and I then stayed in relative luxury at the Ely Motel 6.

Driving south, in the morning, to the small town, the weather was right for this strenuous day climb of this 9,561 foot summit. The route is described in the hiking guide, so we followed the directions to Box Canyon. The sun was warming things up, and we enjoyed our cross-country hike up this unusually scenic canyon. A big cliff side with conifers, then short dry waterfalls, then a narrows, were seen and encountered. This went on and on.

We came to a jeep road, but shortly left it for a cross-country bearing toward the peak. Climbing steadily, we thrashed through some brush, then came to the main summit ridge. I had dashed ahead, and took plenty of photos. We were almost 5,000 feet above the desert floor where we had started. The weather held, and we enjoyed the sun. It took about 7 hours to complete this ascent. I placed a register, which we all signed in. We had picture taking absorb some time.

The Guidebook says to go north along a ridge for a downhill route, "following your nose." This is slightly inaccurate. The ridge itself comes to a large drop-off, and only a ledge to the left leads down, with some circumventing required. The leader took us down along the west side of this main ridge, which was O.K. We were navigating for a first, I believe. I shot lots of photos, to record our route.

It was getting late in the day. Some persons were slow, perhaps not used to this. Two faster hikers signed off to try a different way. Finally, we came to a long, steep slope. The way down was all visible, so I scooted ahead, then lost the group. I bee-lined for the cars, and got there just past dark. About an hour later, the others came in.

We motored off to a primitive campsite where most didn't have dinner till 11 p.m.

The next day, we chose to arise slowly. We then drove east on U.S. 50 to meet at Sacramento Pass. Continuing further east, we drove around to a major dirt road heading north for our backpack route up Mt. Moriah. The guidebook gives more directions. We motored to the trailhead for Hendrys Creek, the harder, but more scenic, way to climb this high peak. A signed trail led us through beautiful scenery up this creek, and we came to camp in an aspen grove. We unloaded our backpacks, and proceeded to enjoy our leisurely afternoon. Some were tired, and would stay in camp, instead of doing the climb on the next day.

Getting up early again, which becomes easy when you have been sleeping well and are attuned to the cycle of the sun, we started the hike up Mt. Moriah. A trail leads up well, and soon, we came to see the huge, 11,000 foot high, plateau known as the Table. Bristlecones and limber pines abounded, and I shot many photos. Clouds made for changing light. After some 4.5 hours from camp, we all reached the top. I took a group photo, and many telephotos of the view. 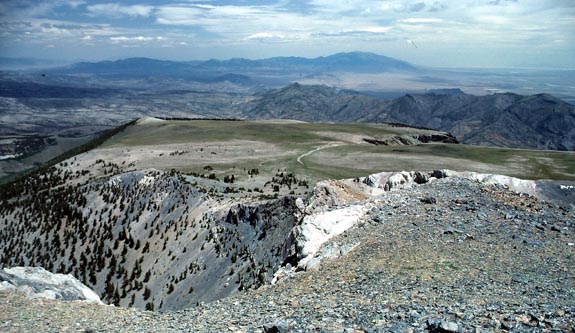 The hike back to camp, then packing up and out, ended this trip. Fred and I had plans to drive on Highway 6 to the High Sierra, where he needed Mt. Darwin. He had arranged for companions, and a guide to lead us, starting from North Lake.

We hiked up, on July 6th, the trail to Lamarck Col, only to encounter weather and wind. It was quite cold for July. I stopped the group to camp lower on the mountain, to avoid worse conditions higher up. It was still a long way to the peak.

Talking to Fred, I did my best to dissuade him from attempting this peak under these conditions. His companions didn't seem too with it, either, with one falling into a creek, and the other ignorant of how to properly carry an ice axe on his pack loops.

The next morning, July 7th, the wind and weather hadn't improved much, so Fred agreed and we two headed down. This may have saved an injury, and a difficult and dangerous rescue, since he moved far too ungainly for a class 4 route with lots of rock hopping. That meant the end to his dreams for a SPS Senior Emblem. "Be a man," I told him. Caution and safety override any risks that seemed likely with this group. We drove home quickly. I supposed he wouldn't take me any more for such crucial climbing goals, for him, but I won't be a part of insensible ideas.