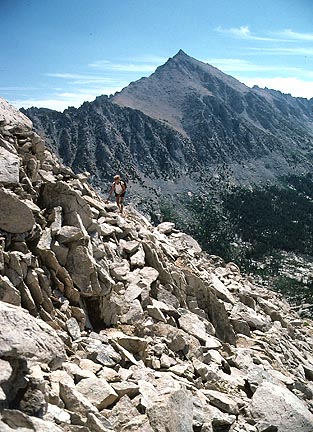 This was a regular scheduled lead for the California Mountaineering Club. Only one participant, Jeff, was to appear, meeting me at the trailhead. That was enough for me, so the trip was a "go."

Beginning our backpack to these peaks from Road's End (elevation 5,000 feet) along Bubbs Creek in Sequoia-Kings Canyon National Park, we plodded up the trail. I had about 45 pounds worth of gear, and Jeff, sensibly, was a bit lighter. I like to go in more comfort, so had cool weather gear along with minimal bivvy gear. This would be helpful in case of an accident on the summits. I like to mix regular grocery store food, which includes heavy cans, with freeze-dried meals, too.

I really labored to get to Vidette Meadow (9,600 feet elevation) where we were joined by Delores, who was to climb only East Vidette with us. I recall getting there by about 5 p.m., after about an 8 a.m. start. Delores had packed in over Kearsarge Pass, which is a bit easier way to get here.

The 16th, we easily did East Vidette. This was my 2X, having climbed this peak the year before. All of these peaks, except for West Vidette, I had climbed already. If I'm doing a difficult lead, I would prefer to know the route beforehand. Some local chapter leaders dismiss their poor leadership as conditional due to the "exploratory" nature of the trip. We are making a big effort. I don't ever wish to have to repeat a climb, essentially from a failure, as what I have seen on other trips. I like to get to the top the first time. I make a studied research effort on the route, to fulfill the success of each trip. I value the time and effort of persons who sign up.

Unfortunately, the next morning, I didn't feel well, so we agreed on West Vidette instead. This was a primarily class 2, scenic climb, with the sharper and higher peaks about us. Technically no problem, it turned out to be a good call, since dark clouds came over in the afternoon. That may have precipitated a retreat from the far more difficult Deerhorn.

A bear visited us in camp, and I took many photos. We stored our food in bear boxes. This smart bear was probably waiting for a careless moment when our food was set out, and not watched.

The next morning, the weather was a bit uncertain. I declared this to be a move day, so we descended back to Junction Meadow. We took the trail up toward East Lake, and past, to our new camp at Lake Reflection. While hiking up the trail, it began to rain, well. No peak climb today was another good call.

We had a good rest, with a herd of deer browsing nearby. Jeff said that he thought he had seen more wildlife on this trip than he did in Alaska!

On the 19th, my plan was to repeat, in reverse, a double climb that I had done in 1988. I wished to, again, take my party up Mt. Genevra as well as Mt. Ericsson. We climbed up to Lucy's Foot Path, which is class 3 on its north side, the side we were climbing. I was stunned by the difficult-looking appearance. I had downclimbed this alone from my solo ascent of Ericsson in 1988, but I thought nothing of it then. Was I really doing this again? I had to check my map. This was it. Nuts! 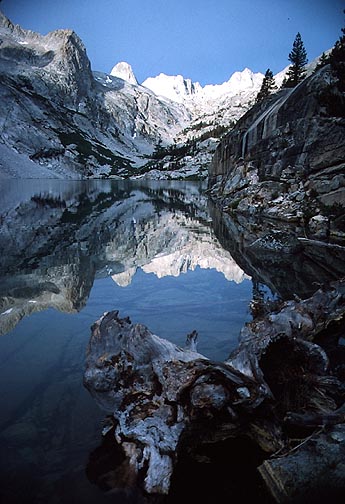 With my ego in tow, we proceeded up. I found a way, and it wasn't so bad. I was tired, so had to convince Jeff to stay with me. We slogged up to the summit of Ericsson well enough, but then Jeff wanted the second peak. We did have the usual nice views.

Descending back to the foot path, I had him sign a release, then let him go, advising him on the route. He would climb Genevra, then descend Milly's Foot Path. This is also a class 3 route. Which, he later said, at first, he didn't want to go down.

I hiked back to camp, where I spent hours trying to retrieve my hung food. Jeff came safely by, and I gratefully used his longer reach to pull down my food.

The lake was beautiful. In the morning, I took more pictures.

We backpacked down to East Lake, where we stored our food again in bear lockers. Taking off for the east ridge of Mt. Brewer, I sensed that this grueling activity was to soon come to its end. The summit pinnacle of Brewer was somewhat of a grudge point for me. It appears higher than the bump with the register. I didn't try it on my first ascent in August, 1981, as I was told it was class 4. The old Sierra Club summit photos show the group on the easy, class 2, bump.

I scouted it, thinking, at first, it was not attainable. Then, I mustered up the courage and strength, and did it. Class 3! Jeff took my picture, and I did the same for him. Success! This aberration is not mentioned in any guidebook. So now, our summit conquest is undisputable.

After taking a few photos of the view from the lower bump, we clambered back to East Lake, and headed out, with a last camp at the trail junction along Bubbs Creek.

Our final day, we backpacked out, the 10 or so miles, in six hours. We saw many lizards and a rattler enroute. Also, another bear made an appearance. Back to the cars by lunch, we met again at Cedar Grove for food and drink. I later sent Jeff many prints of the several pictures I had taken of him on the summits.

This has been my last, major, multi-day, peak climb in the High Sierra. I take too much weight, preferring to boil water instead of using a filter. I have to start each day carrying three or four liters of my boiled water, since I have no time to boil more during the day. Jeff could pack less water, since he could filter as we took breaks near a water source. Plus, my camera gear then weighed about four or five pounds. I carry a bigger first-aid kit, a sewing kit, cord, sometimes a light rope, and lots of stuff, which, most of the time, I don't use. In my role as trip leader, I feel I have to make up for what participants don't carry. However much more of a burden, the benefits of more exercise, have to, for me, outweigh a slower pace, usually. 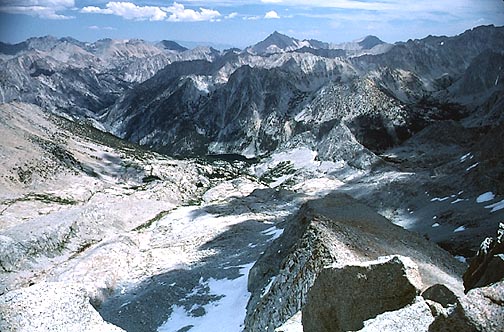 Now that I am older and less in condition, I have to plan a slower pace. Real tigers wouldn't be happy with my itinerary. My advantage is my experience. I know the way, so often this saves effort than with ignorant go-getters. Those may choose a harder, and even sometimes, a ridiculous way. I know where the use trails are, and the easy routes. So, you would have still got the summits, with me. There are few who will do this for free, under any club's activities. You just had to bear with me.