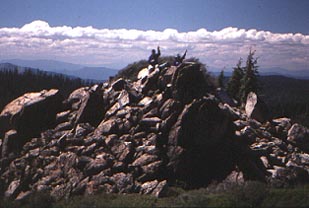 Avid peak bagger Fred came through again with this trip to the far north of the Northern Sierra. Last year, he had made a driving tour of major lookouts north of Highway 70, and wished to explore more via his truck. I tagged along, with another friend, too, to motor about some, instead of always just hiking and climbing, for once.

We came to Plumas-Eureka State Park just after noon. Touring the small museum ($1, adults), we then drove past the ski area to Eureka Lake. A large group of scouts were using the peak trail and climbing the crags seen from the lake. I took notes on the route for my peak guide updates, as things seemed to be slightly changed.

Slowly hiking up the trail, we came to the main ridge, with good views from there already. Many teens ambled about on the rocks to the east. Radios squawked and noisy chatter filled the air as they tried to communicate amongst themselves. We continued up west on the trail along the ridge, and quickly hopped over a snowbank to come to the rocky summit area. A very short, slight use trail through brush leads to the top.

Finding nothing except the white posts marking the tops, I chose to place a register. This placement will probably soon disappear, as they seem to do, since this peak is so popular. I left only a small notebook, but hope this will encourage another, better, maybe official, placement. We had our nice views.

Descending, we continued west along the Eureka Peak loop trail to quickly come to a used vehicle track. In a hundred yards, a signed trail departs to loop back east to the original trail. Our very leisurely round trip time here was three hours and twenty minutes. 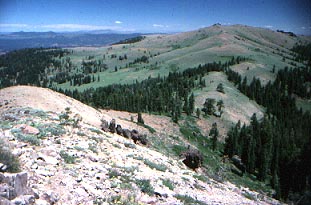 Having a fine restaurant feast in Portola, we camped at Lake Davis, with few mosquitoes to bother us.

The next morning, we sought to have an early breakfast at Hallelujah Junction on U.S. 395. Coffee and hot sausages were available at the mini-mart. We motored north to the little community of Doyle, and then took the Doyle Grade west, back into the Sierra.

We motored along on Forest Service roads, some paved, some dirt, then came to the Thompson Peak lookout, by 10:30 a.m., after many miles of driving and navigating. This is a signed viewpoint for avian wildlife, and has a good view of Honey Lake Valley. The lookout pointed out the distant peaks, and spoke to the others a bit. Lassen Peak and Mt. Shasta were visible.

Continuing on more USFS roads, we visited Antelope Lake. Then, we drove to Red Rock, another lookout. Here, we hiked along the ridge to Diamond Mountain. While not the highpoint of this smaller sub-range named the Diamond Mountains, it offers a rather good view of the town of Susanville, CA to the north. This ridge walk entails about 2.5 miles with 800-900' total gain round trip. There are some animal trails, and a two-wheeled ATV track was found on part of this ridge. 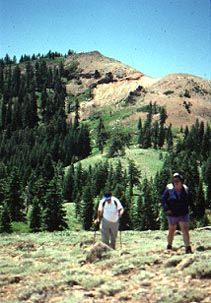 I scrambled up a small, knobby crag that had a benchmark, and competed as a potential highpoint, although we knew beforehand that it wasn't. After successfully urging the others to climb it, we hiked over to the nearby, actual highpoint. I placed another book and cans, and we relaxed and took in the view.

It took an hour and a quarter to complete the climb back, and we quickly took off to follow more USFS dirt roads to the south. Coming to pavement and big green valleys, we noted the surrounding peaks, came to Highway 89, and then Highway 70, and thence back west to the great Central Valley and home.

Our total hiking stats were some 8 miles with over 2,000' gain. The daytime temperatures were cooler than normal, I'd say, and the night was a bit cool, too. The few remnants of snow accentuated the green slopes and forests all about on this most leisurely of peak bags.