Because I had a $219 travel credit with an airline, I found at the near last moment that it was shortly due to expire. Seeking to use it up, before I lost all of the money, I searched the airline schedule. I looked at what I could do, but all involved investing more money into a trip. No use to explore cities, as the dining was all take out. So, no Seattle or Portland, and certainly too early for the New England fall colors.

I decided on LAX, as it used up the travel credit. I’d have to rent a car, and lodge at a motel. To then spend maybe $150 more, I’d get the flight over the Sierra. Good for photos and video, this would be experience for future travel.

Making my other reservations, the day before the flight, I continued to bag the Benchmark, doing then the four bumps along the Grimes Crest. Calling this the 4 Bump Bag Boogie, I wrote this into the registers. Then to get to bed, for the next day’s flight.

Up at 4: 30 a.m., Tuesday, I got ready for the overnight. Packing up my stuff, I left home in my electric car. Zooming to the jetport, I took the long term surface parking. Then to walk over to the terminal, and go through the security checkpoint. I haven’t flown in 20 years, the last time with the diminished Sierra Club member/leader. She won a contest by her, and refused to take no for an answer. Then 9/11 happened, so I haven’t flown in all that time. I had made plans for flying now, to Seattle or Las Vegas. With changes in plans, then the pandemic and smoke, I had to cancel and take the credit. 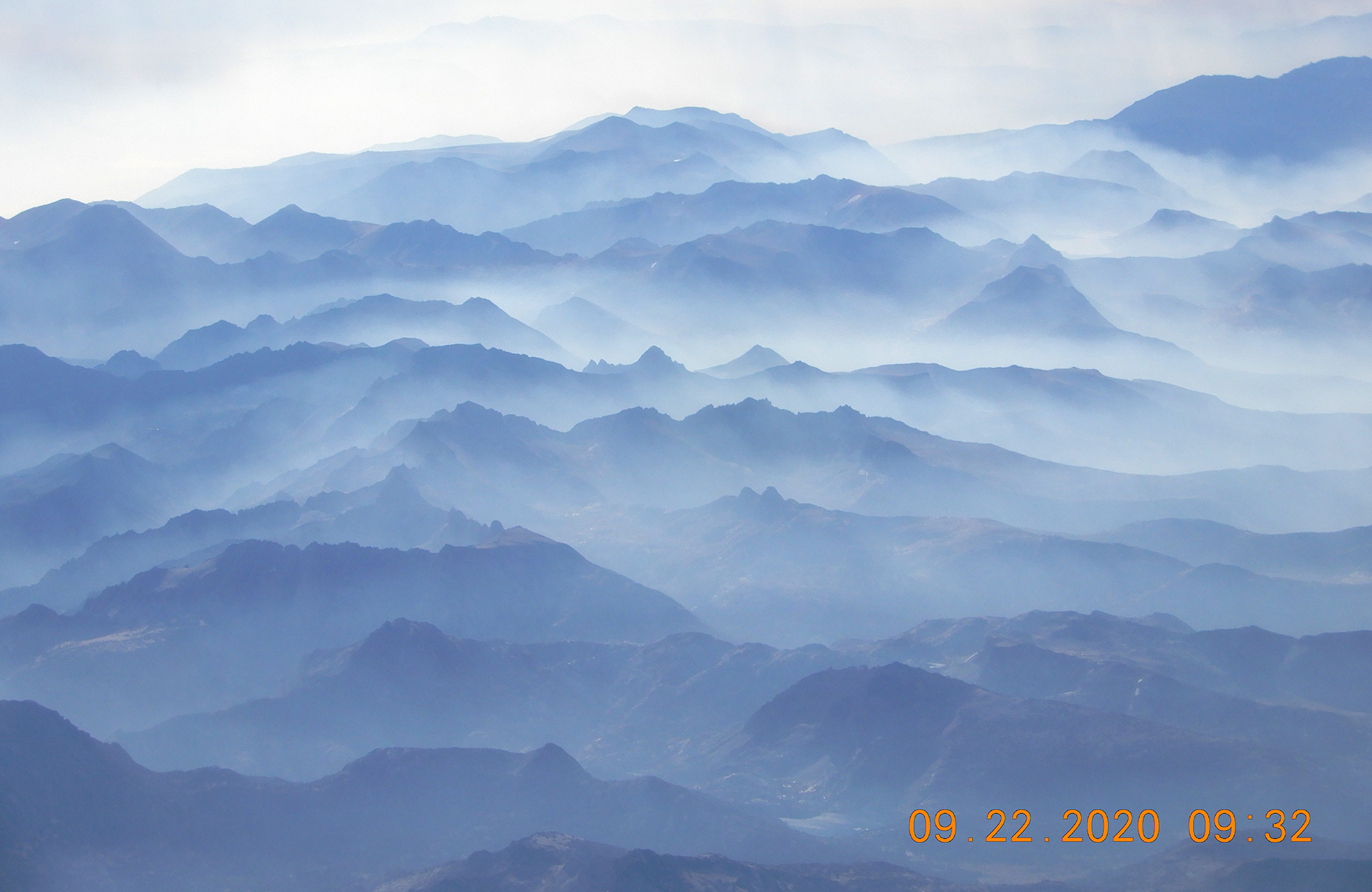 Waiting for the flight, we took off right on time. Plenty of smoke in the mountains, but L. A. was due to be clearing. I took many photos with videos, with the Desert and Yosemite. Coming into LAX, I had to get to the car rental. With too many morons directing me the wrong way, and also me being somewhat confused, I lost two hours before I finally got my rental car. Then by about 12 Noon, I zoomed off on Highway 1 north. Stopping in Venice, CA, I paid $10 for an hour's parking, then strolled along the boardwalk. Lots of people, and many w/o masks, but I had on my two masks and face shield.

With the hour’s parking, I got back to the rental car, a Kia Rio. I had mounted an older dash cam from the Saturn, and it captured much of the drive to the Santa Monica city parking garage. I then came to the Santa Monica Pier, where I took another hour to stroll down to the end and back. Going back to the garage, the parking here was free for 90 minutes. 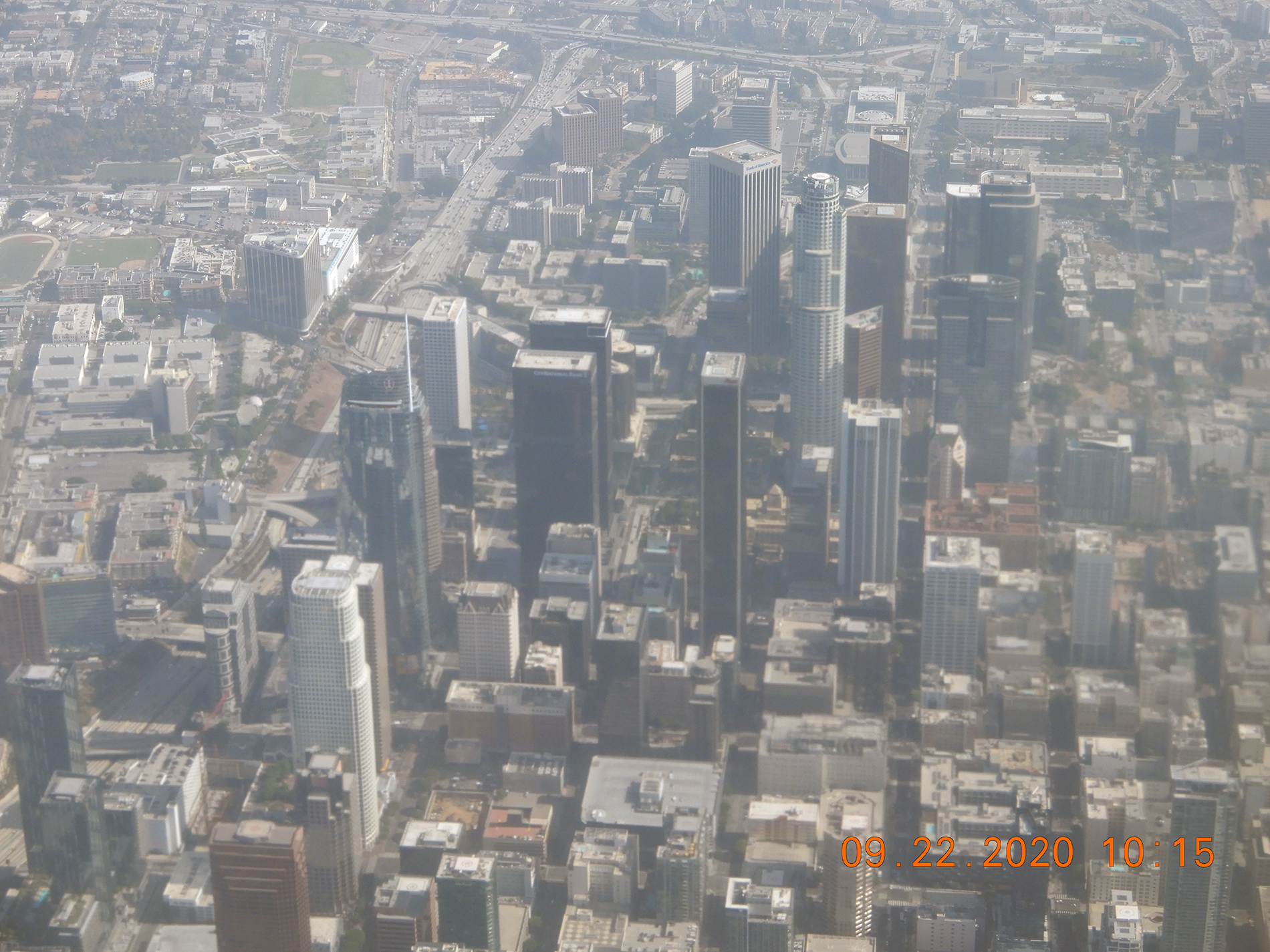 Then to head east on Interstate 10, where I slowed due to a traffic jam. Normal for L. A., I took the Grand Avenue exit to motor through the high-rises area. Because the camera dropped off due to the deficient suction cup, the camera wasn’t then pointed too well. I must have fixed it as it ran as I came to Little Tokyo.

The parking meter there was buggy, as I put in so many quarters at 25 cents for every five minutes, which took all of my coins, so I tried inserting a credit card. It counted down for only the quarters, so I had only till 5:23 p.m., to get back. So, I couldn’t dine here, as was my wish. I strolled about to the Go For Broke Memorial, then back through the Japanese Village. I got a $2.50 pork bun, which was delicious and yummy, but I had no time for more.

Motoring off to the freeway, I thought that I had the dash cam running, but it had went out. I took Hollywood Boulevard, with backlit scenes. Then to motor back east up Sunset Boulevard, with the light at my back. They didn’t have all the movie billboards, as I remembered from decades ago. I had changed my memory card, but none of that came out. The dash cam light showed that it was recording, but nothing on the screen. I turned about to capture Hollywood Boulevard again with backlighting, but none of this was captured.

I can do this again, as Los Angeles isn’t so far. I snapped a few photos, so all was not lost. Taking La Brea south, I got back to the Interstate to head back to Santa Monica. Parking again at the city parking garage, this was free, so I went to the Third Street Promenade. I found a ramen shop, so ordered the best that they had. Music was being performed loudly in the adjacent street, so I had to raise my voice. The waiter said that I was yelling, but I did get the bowl of noodles. Then some diner’s dog was barking loudly, and they said there was nothing that they could do. Glad that I left no tip, I sauntered along the Promenade.

To the Tesla dealership, I made a couple of complaints. The wall connector most always flashed red, and refused to charge nicely. Also the car software crashed a lot, so I wonder if I got a defective car. Nobody will speak with me, so perhaps this is the case. It’s due for body work in a few days, as it crashed so the rear camera went out. I couldn’t then see anything, so I hit a post in my garage. The insurance company says it’s 100% my fault, but they’ll pay, but my premium could go up. I disputed this, but I guess this is what happens when you get what you get.

Back to the garage, I motored back to the car rental return. With enough moron bus drivers, I walked to the motel a couple miles along the busy street. Some homeless along the way, but the moron motel clerk refused to allow me to use the stairs, as only one elevator was working, and the signs said only three at a time. I waited half an hour to get my chance and finally board the elevator, to go up only to the fourth floor.

Finally to my room, I took a shower and charged my devices. Watching the TV, I got the local news. I could have done far more today, but I lost a lot of time with being given the wrong directions. I’d never been to LAX, so I was very confused.

Setting my phone to wake me up at 5 a.m., tomorrow, I went to sleep.

Up at 5 a.m., Wednesday, my phone did work as to the alarm. Checking out of the motel nicely, I headed down the street to the bus stop. The ride was free, so my worry with the phone Wallet app was for nothing. Then to a shuttle stop, where the driver let me off at the wrong terminal. I had to walk a mile to get to the right one, and I feared that I’d miss my flight.

Luckily, the security was efficient, so I got to the gate. The boarding pass was wrong, as the gate was changed, and nobody would ever tell me. As the time to board was past, I decided to check the departure electronic board. I had to hurry to another gate, where the flight was boarding. “They do that,” said the agent, so I was lucky to get my flight.

Up in the air, I witnessed the mountains as we flew overhead. Seeing Yosemite was clearer, I took many photos of the peaks that I had bagged. Thrilled to see this all from the air, this made up for all the moron-caused troubles. I ran some videos of the take off and landings, so something to have in my video collection and website. 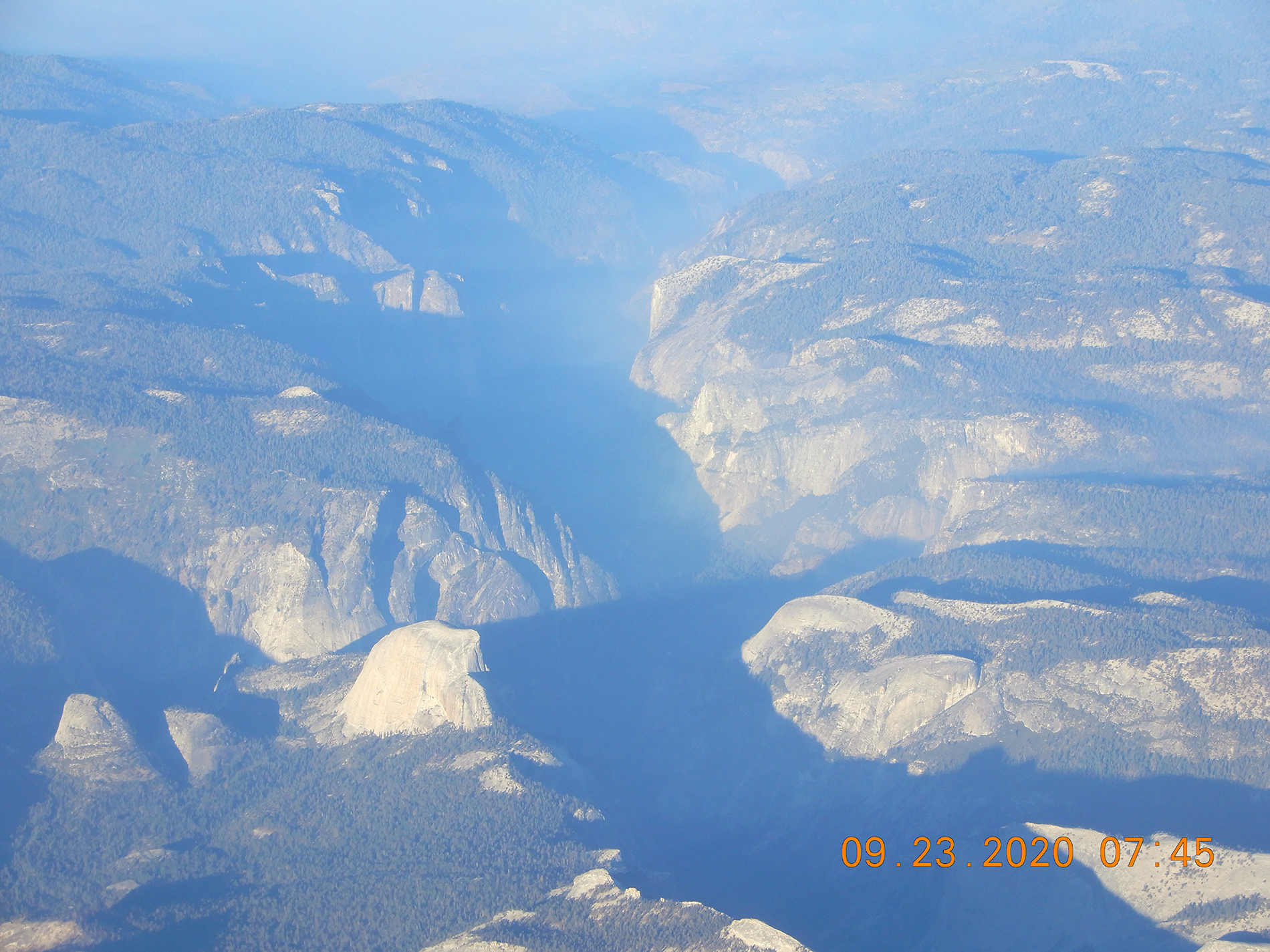 To my car in the parking lot, my Watch refused to work to pay and exit. I had to go through a manned gate, so I finally got out of there. Back to Reno safely and successfully, with all my gear, this was all a lesson learned.

I stopped for breakfast, but even more morons staffed the fast food windows. None of them took the convenience payment, so I ordered less than a full meal. Stopping at the supermarket in Fernley, I got a chicken strip and more potatoes at the deli.

Home safely, I got to the downloads after a shower. I found then that much of the dash cam videos were lost, as it’s an older and defective device, and it had been working before. Little matter, as it’s poor quality anyway, and obviously defective or deficient. I declined to use my better dash cams, as the suction cups do come loose quickly, so I’d have to buy another one.

So, cheap, defective junk is what you get with foreign made. I look to have stayed safe, with my two face masks and face shield, all made in the USA. No symptoms yet, and I’m now home safely. As of October 7, I have tested negative. Hurray for Boeing 737-800’s, as the flight was gorgeous. I captured a lot of photos and videos, with my quality camera. The Designed in CA devices worked nicely, too, and I had long ago suggested to have a mount for the phone so it could be used as a dash cam. Refused, as there’s supposedly visibility laws, this detracts from my art.

So, with idiot laws, I was forced to stupidity. With no consequences whatsoever for failure to ever wear a mask, so tens of thousands more will die. The motel Wi-Fi didn’t even download my messages, so never again. I couldn’t get even a single webpage to load, as it looks that they couldn’t care less about the customer. I’ll never go back to that noodle shop, and ought to tend to reviews, but nobody will ever read or listen, anyway.

Capturing so many hundreds of photos, I also took many movie clips.