Up early and getting restless, I had some business in Reno. I had to get a strap put back in place on my regular day pack, and also to ship an irrigation timer back, as it didn’t work. Leaving home at about 6:30 a.m., I beelined to the Fernley casino, where I had the $4.99 breakfast special.

Motoring westbound on Interstate 80, I arrived to the Huffaker Hills trailhead. Hiking then to Twin Peaks, I made a register check. I took photos of the pages, as people had signed in. Good that nobody removed it, but I’ll be needing to place another book, sooner or later. Pages had been skipped, so I signed in myself on empty pages. 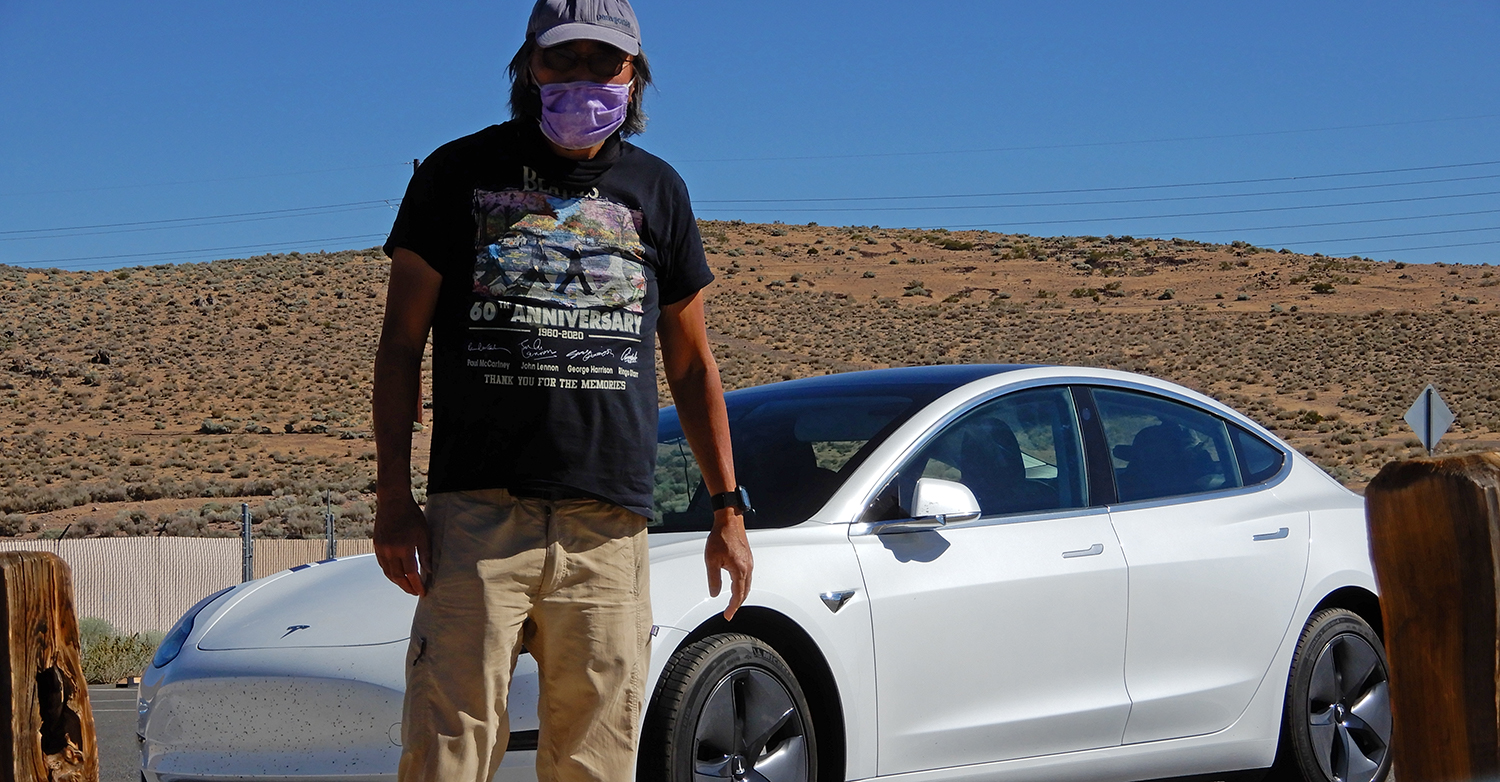 Back to the car, I went by the nearby UPS Store, to ship off my package. Then to the enviro clothing outlet, where they took my pack and fixed it, then and there. I had it all done, so I motored north on U. S. 395, to head westbound on CA 70. Great to be cruising along back on CA highways, and then to Portola, and then south to Greaegle.

Setting the car navigator to go to “Mt. Elwell,” it took me to the Round Lake trailhead. I didn’t have any connection, so couldn’t view my own website directions. I hadn’t copied and pasted it into my word processing app.

Game to explore, I took the trail towards Round Lake. Plenty of wildflowers, and I decided to go by the Pacific Crest Trail. The trail up headed away from the peak, so I knew it would be a longer hike. Passing by trail junctions, I finally came to the PCT. Taking it northbound, I started to enjoy the hiking. A slight bit of snow to negotiate, and it was going nicely, then. Seeing no thru hikers, I erred by taking a side mountain bike route. It went up and down, then two bikers came by. They told me it was the Oakland something or other, not the PCT, but I went on, and got back to the PCT. Descending slightly, I came to the Elwell trail. It went to a saddle, and then started up for the summit.

I had to take a rest, as I had found groceries in my trunk, from the day before, which were hidden behind some large storage sacks, and that I forgot that they were missing. I packed the food into the pack, and decided that they wouldn’t yet be rancid, even though they went without refrigeration for a whole day. I had a diet soda, then a roast beef sub. Doing a selfie video of my consuming it all, I didn’t get sick.

It was slow and late in getting to the summit, which had a convenient, rocky, side trail to the bouldery top. I got there at about 4:30 p.m., but knew I had some time with daylight to get back. Capturing the view, I used my older spare camera, as the batteries had all depleted on my main good camera. I captured all the entries on a newer book, but the two other older books were all curled up, so maybe to photograph them another time. I placed a new book, and inserted it all back into the container, and then had to leave.

Headed down by about 5:30 p.m., I’d take a more direct way back. Some trails must be new, as I don’t remember them going to some newer lakes destinations. Taking the trail to Mudd Lake, there were some smaller up and downs going by the Bear Lakes. This was all new to me, so I took plenty more photos. Little Bear and Big Bear Lakes were pretty, and I captured the signs at all the junctions.

This would be a more direct way to bag Elwell, at least by my Route A. I have to make changes to the Northern Sierra Peaks Guide, as by the maps, this looks to be another good way. The old route goes by Long Lake, but maybe has only one bigger up and down.

I got back to the Round Lake trailhead by about 8 p.m., and by the looks of it, you can now go by the Elwell Lodge as the best way. My phone somehow stated some 40 miles, but my Watch had gone to low power and lost the data, but I recall that it read some 12 miles for the hike by the PCT round trip. Nothing on gain, but it must have been some 2,000 feet or so. I swatted away many mosquitoes, as there had been none in the middle of the day. Using the facility, I drank up my remaining water.

Taking off with the intact new car, it was to zoom past Greaegle to see no businesses still open to get drinks. I got two bottles of diet soda in Portola, and it was too late to stop at my old favorite casino at the state border. In Reno at the 24/7 diner, I had 55+ chicken fried steak, mashed potatoes, corn, and plenty more diet soda. The Watch was dead, so I had to pay by phone. It repeatedly didn’t work, so I had to try another credit card, as the 5% back card refused to go through. I didn’t tip at all, as it was frustrating.

On the Interstate eastbound then late at night, I got the auto high beams working, which was really nice. I got more energy drink, then after an agony of staying awake, made it safely home by midnight. I had only a few miles left on the battery range, but knew that I would make it, all the round trip from the single charge at home.

Unloading my things, I plugged the car charger from the wall connector into the charge port, and took a shower and went right to bed.

Out like a light till 4:40 a.m., I got up and got to the computer, to complete the downloads, and then to write up the post. I almost didn’t make it, figuring on turning back as it was getting late. Doing the PCT took lots of the time, with many more miles. Lucky that it’s an easy peak, but I did make it tougher. I did do some exploring, and wasn’t ever that tired. I didn’t get so dehydrated, as with the previous peak, as then I ran out of water, and so was out of balance on my hydration for a couple days.

So, now I’m in better shape, having done maybe over 13 miles for the day. Some guy with the hiking club had said that was the minimum that he’d do to go out of town for, even with my offer for a free carpool. I don’t see his name again, as he used to lead the harder Club hikes, but for them, it’s all cancellation due to Covid-19. At the diner, I did a selfie to show how happy that I was, doing the hiking so well.

Doing the trips to the Sierra Passes, with Tioga, Sonora, Carson, and now Gold Lakes Road, the car did the regenerative braking and increased in range as I cruised back down east from the passes. There’s yet Ebbetts Pass, so maybe a peak there later on. Also Donner Summit and Echo Summit. Peaks to bag later!