Up for a bigger day, planned for awhile, I used my older car. I didn’t wish to risk the new car on dubious roads. To bag some peaks that there was no information online, that is my drift. I looked at Maps, and saw that on a search, nothing came up on climbing these two peaks. They’re both easy, so right up my line.

Leaving home early, I had the sun in my eyes as I motored eastbound on U. S. 50. I forgot to have extra memory cards for my dash cam, but the drive was mostly recorded. With most everything closed, I used my pee bottle many times. Getting to Austin, NV, there was road work, and a brief delay.

Taking NV 376 south, it was to stop at Carvers to empty out the pee bottles at a rest area, then to take NV 377 east to Manhattan. Using my navigator, I came upon a fellow walking the approach road to Salisbury. Chatting, he had bagged it many times, as he lived there. To the dirt road pass, I parked and then started the hike. Up a dirt road, then to head up the peak cross country, it was steep at first, then gradually leveled out. I had two hiking apps running, and then I made the top.

The view from Salisbury Peak was nice, and taking lots of photos, and video, I left a new book with cans as the old register was deficient. Dried out scraps of paper had been placed in a glass jar, so I improved on this. With a diet soda, I enjoyed the first of my three peaks for the day.

Carefully stepping down the slopes, I made it back to the car, and motored off. Using the navigator on my phone, again, I drove to the second pass to the south. Hiking Summit Hill was easy, as I made the top so quickly. I enjoyed the views, with trees by the top, a pile of rocks, and a fallen wooden post.

Sauntering down, I made it back to the car, so motored back down the dirt road to go to the bar in Manhattan. They didn’t serve Heineken 0.0., so I ordered a Diet Coke. As they opened the bar as I got there, another maskless patron came in, so I left.

Motoring on home, the same way, I stopped in Austin, to be told to leave the cafe, as I asked about keeping my mask on, as the sign said NO MASKS. Going to the nearby gas station, I used the restroom and got a roast beef sandwich, and diet soda.

Going there, the USFS ranger station was closed, due to the pandemic. Taking U. S. 50 westbound, I stopped at the shoe tree for photos, and then at Middlegate. Energized, after a diet soda, a hot dog was quoted as over $6, so I declined. 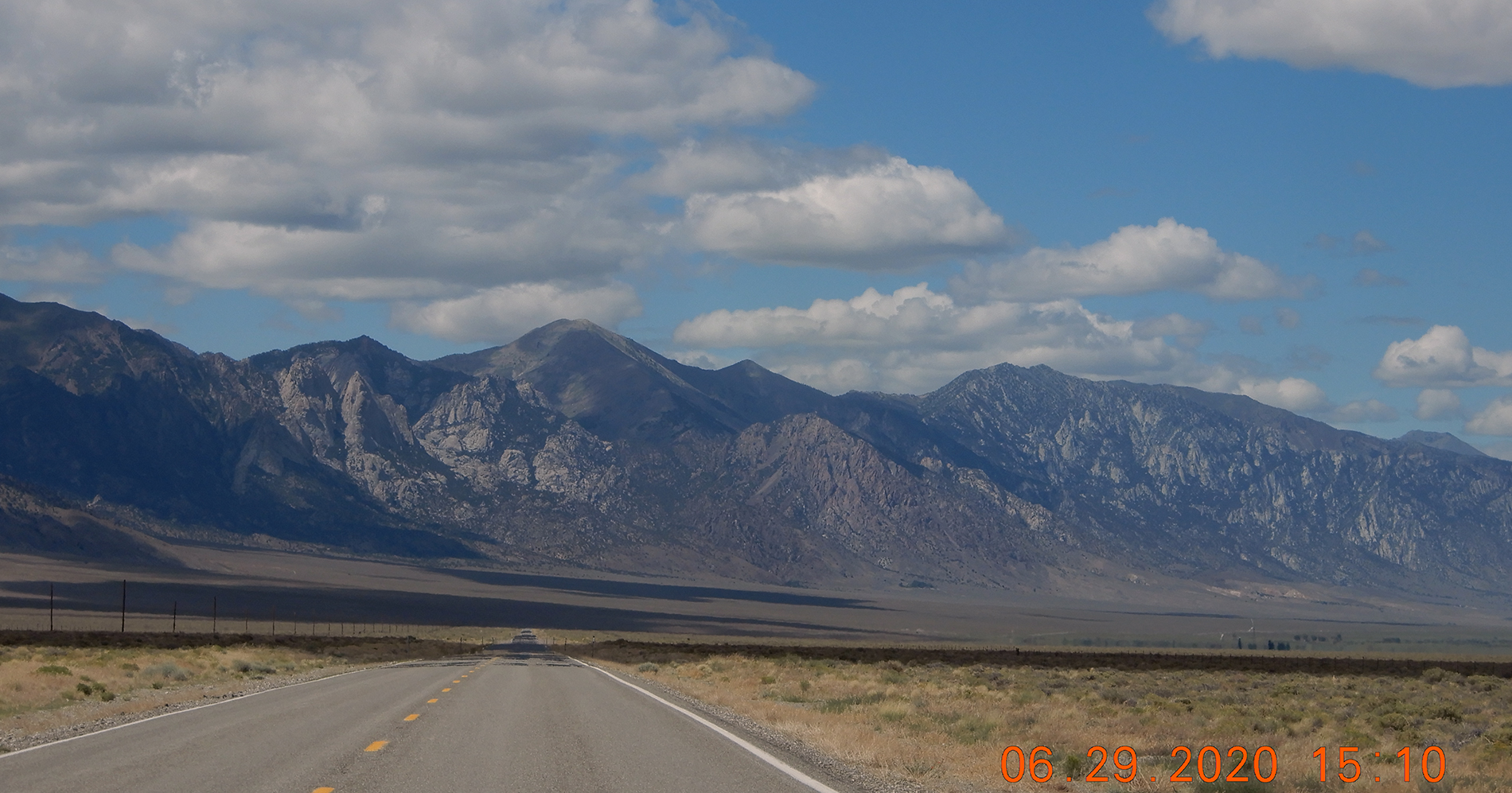 Stopping at Grimes Point, with plenty of daylight, I made a register check along with bagging the Benchmark 18X. It was a good sunset, with red clouds.

Back by dusk, I chatted with a camper in his van, as he was going to sleep somewhere. My main camera had depleted all the batteries, so I switched to the older camera, for photos.

Safely home, with three peaks for the day, I had blueberries and somen. To the downloads, and as it had captured it all, the old dash cam had worked. I figured with just one old memory card, the data would be overwritten, but the entire drive was saved.

Hiking less than a mile to each of the top of the two peaks, and with also the benchmark, I went some 6 miles total. I captured nearly a thousand photos and movie clips, and did the entire drive on one tank. Some 400 miles total, so the car gets good mpg yet. It had been a beautiful, gorgeous day, with excellent weather. I had three bars on every summit.

Pity that no one will ever tag along, but as most people hate peak bagging, so I go it alone. Short trailless travel, and then dirt roads, nobody does this. I did place two registers, with one upgrade, and maybe in decades, I’ll check them. 35 years ago, I had hiked here before as a classic lead. Amazing what happens over the years, as there were changes. Round Mountain, NV, is now a huge mine, and the restaurant in Austin also changed.

Having now driven the dirt approach roads, I might have done this all in my new car, but better to save it for good highways, as I’m hoping for doing now a nine state loop. It’s to now motor over the rest of the Continental Divide paved passes, save for one to be driven in the Fall, when the colors are said to be spectacular.