Figuring on doing a camping trip, I decided to head for the Eastern Sierra for three days. I got the idea on the spur of the moment, Sunday morning. I got my new deluxe cooler filled with ice and drinks, and also food, readied my packs, but forgot my toothbrush and toothpaste. Loading it all into the trunk of my electric car, I took off by dawn.

Taking the roads to Topaz Lake, I had my $7.99 steak and eggs breakfast there. South then on U. S. 395, I stopped at Mono Lake vista to chat with some moron. He insisted that he was discriminated, being white, and I had to disagree, about hate. After maybe an hour, I saw it was futile to chat more, so I left, after photos.

Getting on to Mammoth Lakes, I used the restroom at the old ranger station, and the visitor center was closed. Going to the Supercharger, I phoned an old friend. Only Spanish as the automated reply, so I guess he’s moved or changed his number, or maybe even died. He’d be near 80 years old, and was pretty overweight, so maybe into a care home. I once stayed at his place a lot, and bought him dinners for that.

Then driving to the Postpiles Road, there was a line of cars to drive in. I showed my Golden Age Pass, and they directed me to go on in. I detoured to the Minarets Vistapoint, for some quick photos. Motoring down the road, I made it to the Rainbow Falls trailhead.

Quickly getting a parking spot, I started my hike. Morons aplenty, with no masks, and walking straight at me, I moved aside maybe 25 times. For passing some hikers, I covered my face and held my breath. Taking so many photos of the trail, I made it to the falls overlook. It was going fine, so I took the staircase down to the river view. Lots of kids without masks, though many were smart and compliant. 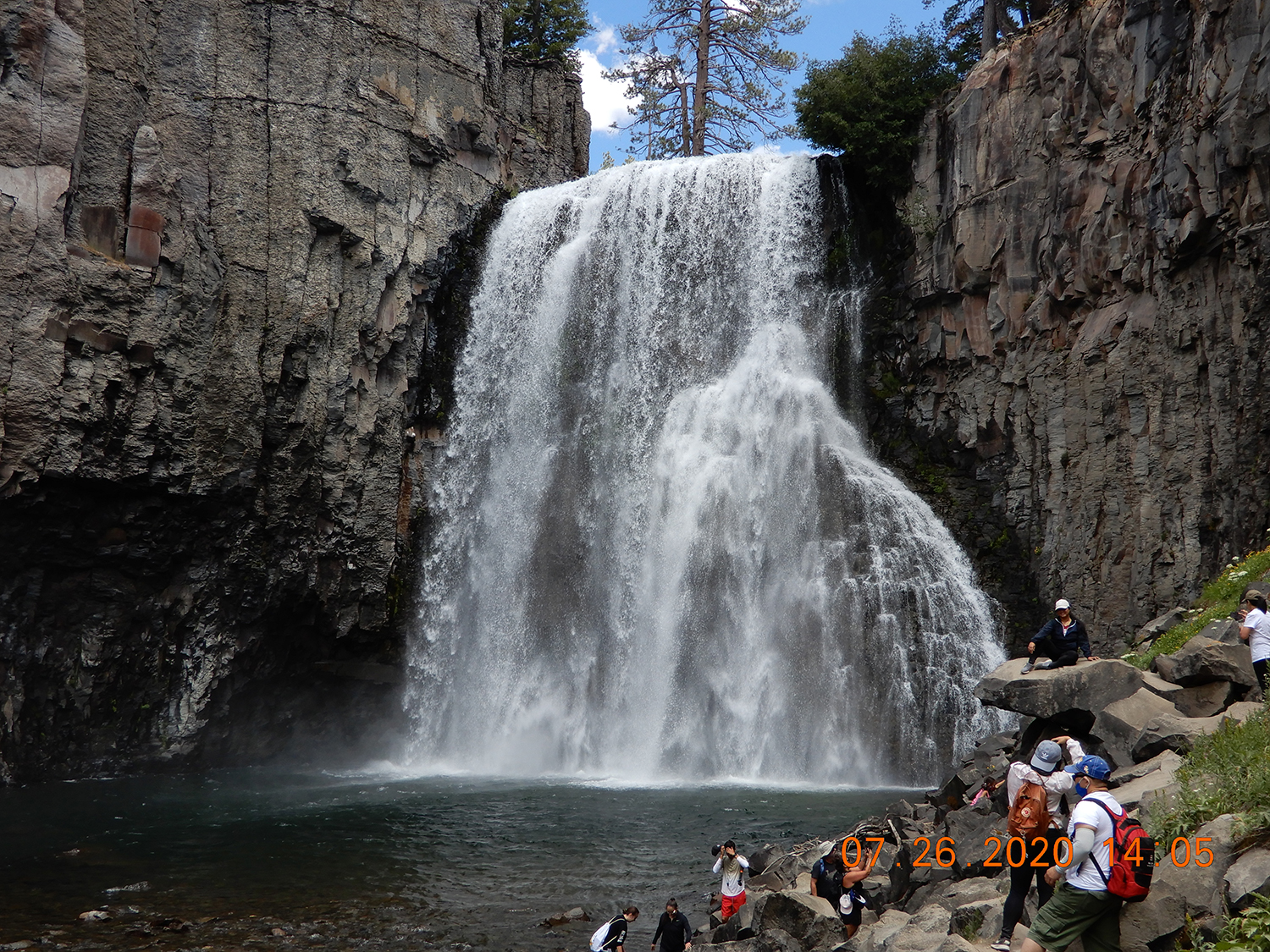 Taking photos and video, I didn’t stay long. Back to the car, I motored to the nearby Postpiles trailhead. Using the restroom again, I went for the short hike to the sight. Taking the side trail to Minarets Falls, it was signed as 1.3 miles away. There were a lot less hikers, but I talked with some JMT thru hikers. I took lots of photos along the trail, then came to the creek at the falls base. Knowing there was a better viewpoint, I looked for the use trail that we had taken in the 1980’s. Doing some scrambling, I came to the better view.

The falls was going well, and I didn’t stay too long, with only a couple photos and video. Hiking back, there were no mosquitoes for some reason, and I remarked to some backpackers that maybe the virus got them all. A trail runner passed me twice, and I spoke with a ranger about all the hikers wearing bandannas. In the newspaper website, they said that these were highly ineffective versus a proper mask. Why they couldn’t place a photocopy to tell hikers, the ranger said they couldn’t because it was the Law. I’d say maybe 30% of those with face coverings, used a bandanna. They look cool, but only morons will prefer them to proper masks, based on the day’s news. 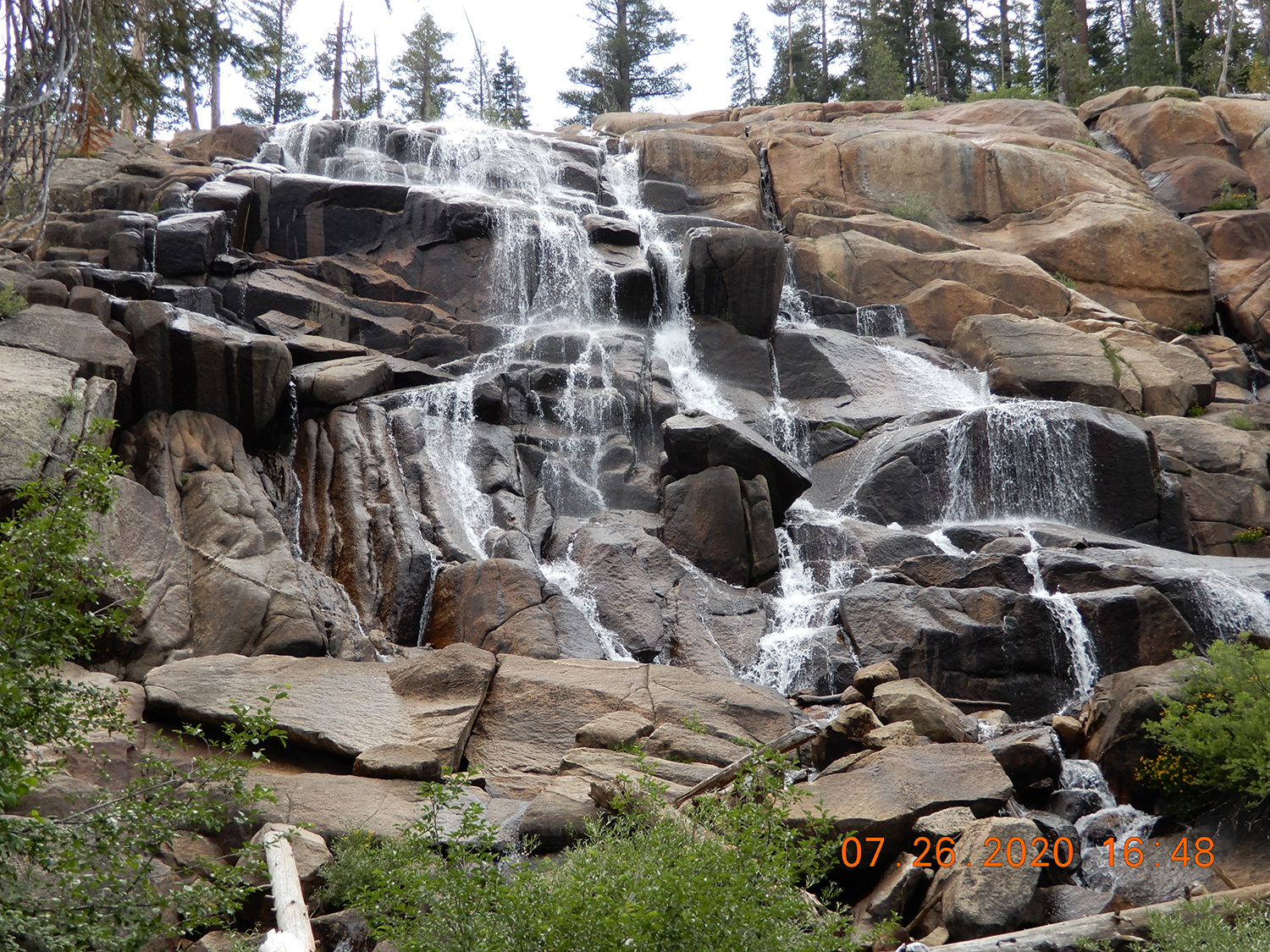 Motoring out of there, I punched it going back up to the Summit. Then taking the road towards Lake George, to park at the trailhead for Panorama Dome, I knew that it was a short hike, signed as 1/4 mile. Some people, a family, were playing on the trail. The mother got into my way, just to stand there, so I politely asked her to move out of my way. None of them had masks, so I became upset as she refused to move. The father came along, and got angry, but I got to continue up the trail. Making the flatter summit, I took some photos.

Fearing for vandalism to my car, the worry was for nothing. They motored off, and I did so shortly. Getting more charge back at the Supercharger, I had more drink and food out of my cooler, and cleaned off the bugs on my windshield.

Heading south on U. S. 395, it was nearing magic hour. I stopped at the Sherwin Grade vistapoint, and remembered my hundred or so times driving down here. I then never would have imagined, having the new car. Now with zero emissions, my enviro dreams have been fulfilled. Though the restaurant that I planned take out was closed till the 6th of next month.

Motoring to the private campground, they were already closed, so I needed change for the $28 cash to pay by envelope. I went to the chicken fast food, and got a meal with an avocado burrito. With change, I paid the campground fee, and had my take out meal in my car.

Seeking to clear the trunk out with stuff moved into the front passenger seat, I laid out my pads and sleeping bag. Doing some weak gymnastics to get into the trunk, this worked out fine. With a signal, I took care of my e-mail and did some surfing. I had my laptop along, with also my tablet, but never used them.

Falling asleep for a few hours, I woke up at about 1:15 a.m., to be unable to sleep anymore, and checking, the 24/7 restaurant was closed. With no place to get food or coffee, and also Wi-Fi, I decided to just drive home. I’d be too sleepy to do a hike, once it was daylight. 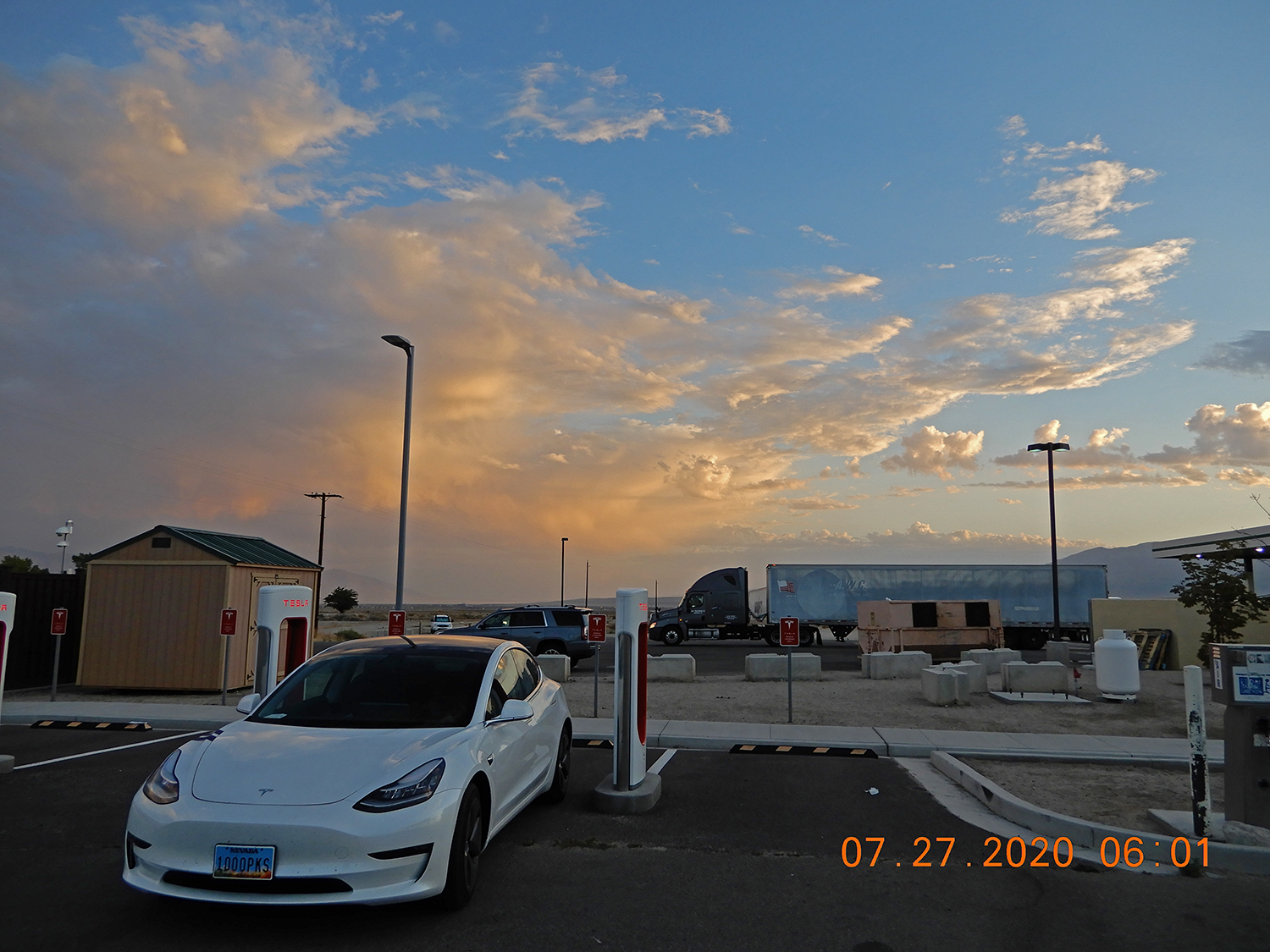 Going up U.S. 6, I crossed over Montgomery Pass in the dark. Taking NV 360 north, I finally came to Hawthorne, NV, with a rest stop enroute. I was falling asleep at the wheel, so got more drink out of the cooler. Getting a Supercharge to get me on home, I watched a movie on my phone. It wouldn’t play on the car screen, so I have to find out if it ever can. Resting then a lot on the rest of the way home, I had stopped for photos of Walker Lake at a turnout. Then along the highway a short ways from home, I had to have more caffeine.

I had an offer for something that I’m selling, so better to be at the home computer for this. Important, as it means money for my new luxury home, I settled down to business since I was now back home. I went to bed, as I was tired and sleepy, but safely back home. Downloading the photos, I then got to webwork, and to making a counter offer.

Monday afternoon saw me rested and ready for more. I had unpacked my things, so aside from cutting the trip short, my first camping trip with the electric car was a success. I managed to sleep in the back, and also use my new cooler.

With a reservation in Yellowstone, I’d be camping four nights as is my plan. Doing then a Ten State Loop, it’s to drive over the rest of my Continental Divide Passes. I made my offer to take hikers, even for salary, but as there’s nobody, I’ll go alone.

When I start doing my other road trips, to see the USA, likely it’ll be by myself, as I have zero company, even paid for. My plans are for four road trips a year, a month at a time. With zero emissions, I won’t have to pay $$$ for gas. Likely with the summer road trip, I’ll be seeing how that goes. Then a fall colors trip, and then a winter trip to the Desert Southwest. With camping and economy motels, it’ll be cheap. To see all the sights, and to bag all the doable peaks.

Come the radical new electric truck, it’s to sell the current car, but with a wife or a good friend, I can be persuaded to keep it for the family. I then will need financing, but with a wife, she gets the car, and I get the Truck. To never have to work, and to live in a brand new luxury home, that’s what someone faithful would be getting. Thousand dollar shopping sprees on every holiday sale, what I can offer, but likely nobody. I’m dating on an app, but never anybody to ever video chat. I’m an old guy, that likes to travel and bag peaks.