Seeing that the fall colors have arrived to June Lake, I left home at about 6 a.m. Taking U. S. 95 south, then NV 359/CA 167 west, I came to U.S. 395. With now three dash cams, I took a drive to Lundy Lake. Then to the main restaurant in Lee Vining, to have an egg to kill some time. The Mono Lake Committee store was then open. I bought some notecards, and looked about. 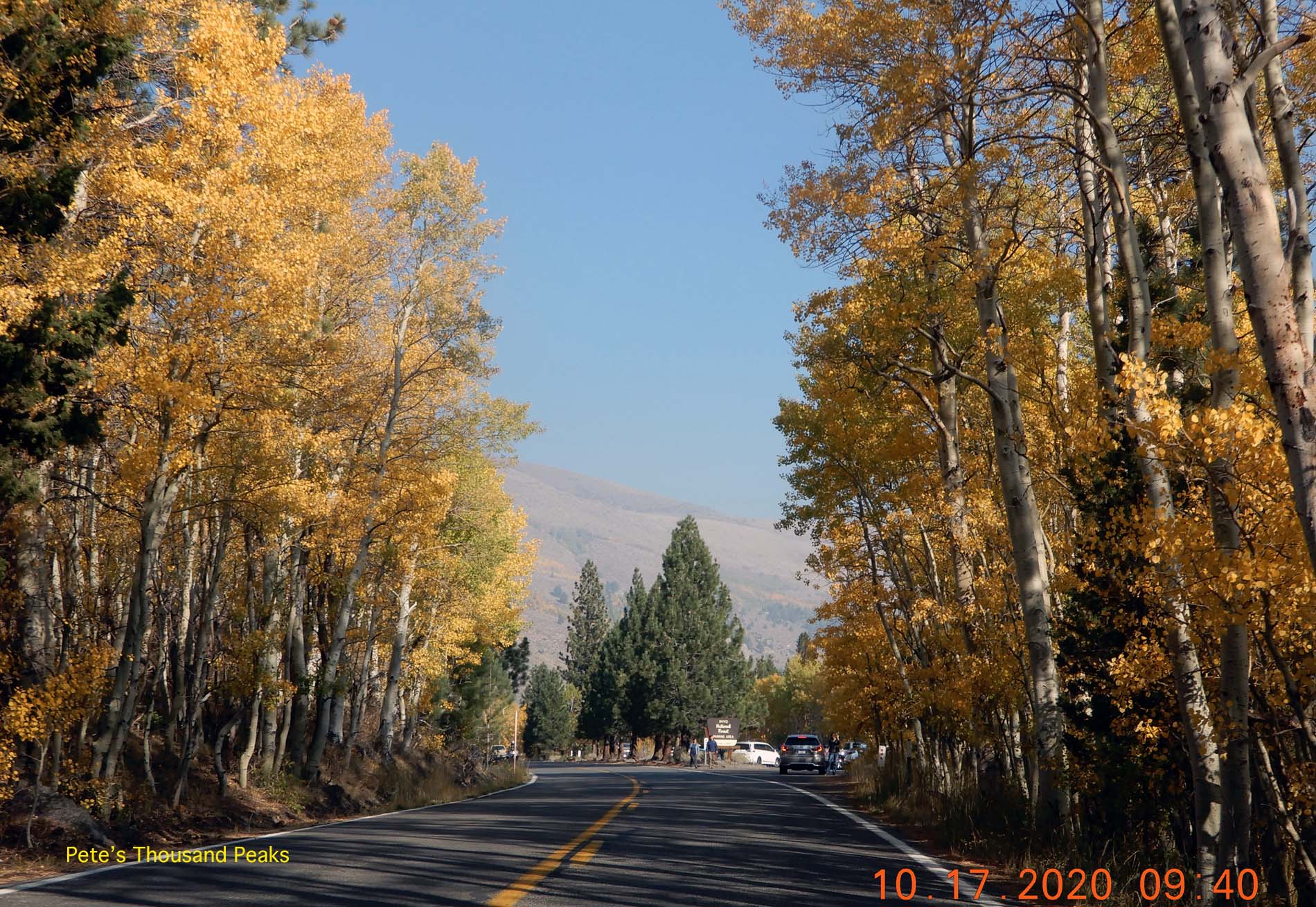 Then to take the June Lake Loop, with the dash cams running. I turned around at the ski resort, to record the drive in the other direction. Then to turn around again, to get to U. S. 395. It was now smoky going south, with poor visibility. To Mammoth Lakes, I needed power, so stopped at the Supercharger, to get a bit more range.

Hoping for a view above the smoke, I went to Minaret Vista. Still smoky there, you couldn’t see a thing. Hiking then to see the “Earthquake Fault,” all the signs were torn down. I followed the crack in the ground, knowing it really wasn’t caused by any quake. It’s a volcanic fissure, totally misnamed. Taking photos, I hiked maybe a quarter mile. 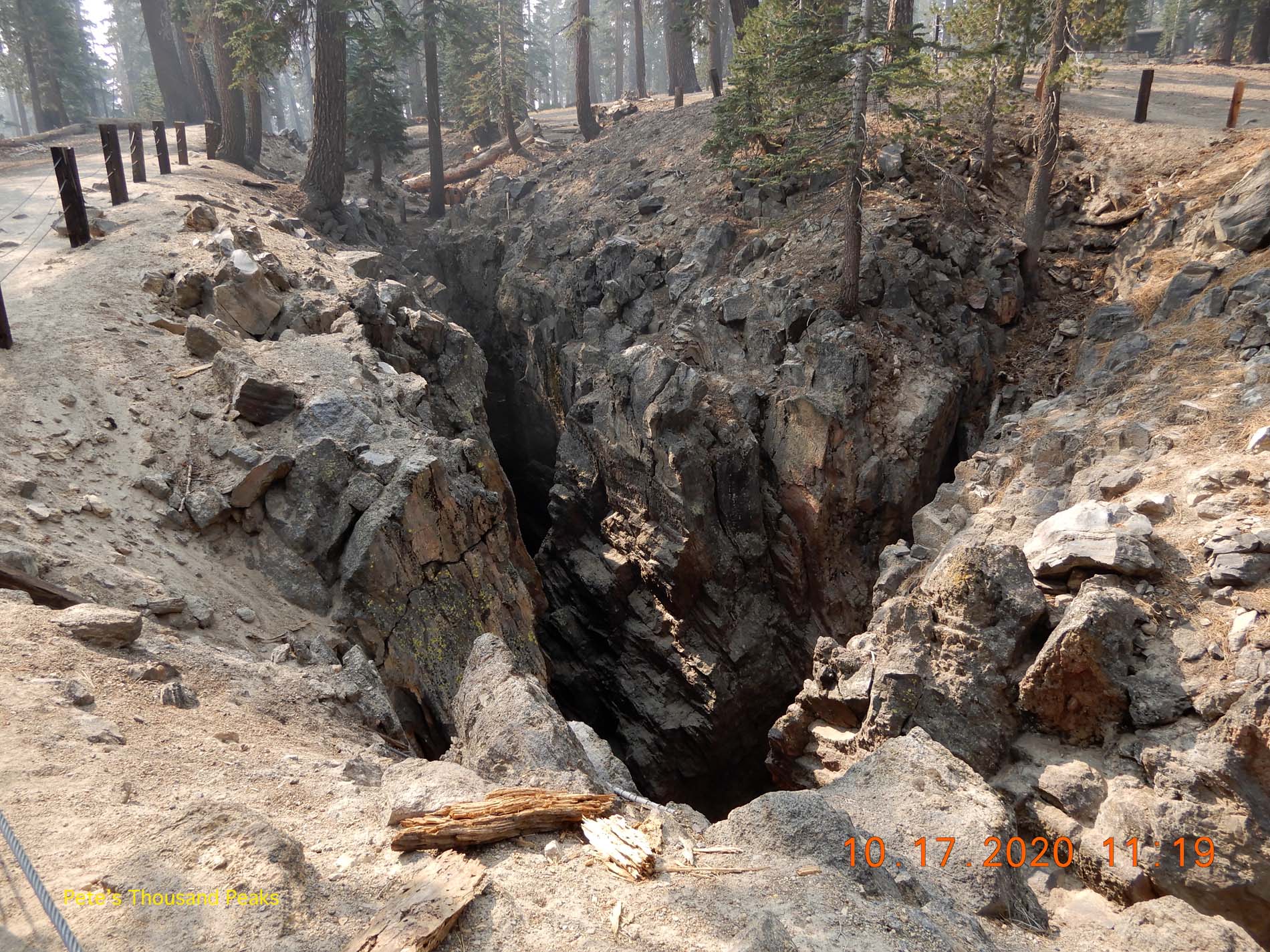 Then back to the Supercharger, to get enough range to make it home. Going to a nearby organic deli/bakery, I had a turkey and avocado sandwich. My Watch told me that the charging was complete, and with plenty of space for others, I knew I wouldn’t incur any charge for idle time.

Back to June Lake, I took the loop from south to north, and hope the videos are fine, as it’s slightly hazy there. Deciding to go home by U.S. 395, I made stops at the Mono Lake vista, the Conway Summit pullout, the USFS ranger station by Bridgeport, and then the Bridgeport museum. Some action in the town, with some sort of festival. 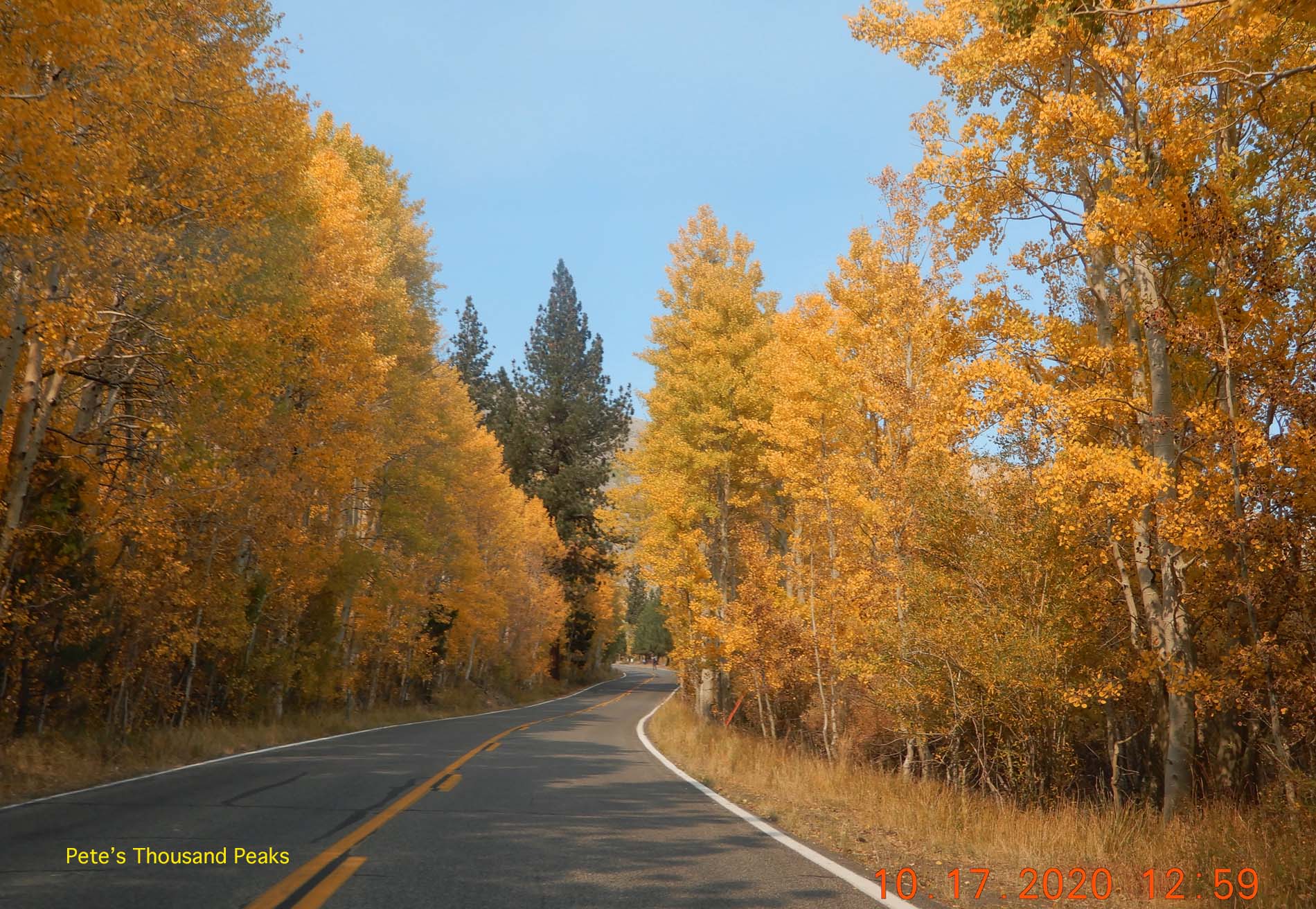 I needed a hike, but had declined to see Bodie. Northbound, it was no stops any more, except at Topaz Lodge, where I just used the restroom, and took a few photos. With now hazy blue skies, it was to head east on U. S. 50 by Carson City. I’d get exercise tomorrow, as I wished to get the webwork done tonight.

Home with plenty of daylight, I got my mail, and washed the car of bugs. I had plans to hike Panorama Dome, but with all the smoke, there’d be no view.

The colors at June Lake were pretty good. I’d give it an 8 out of 10, aside from the hazy conditions. I have now 4K video, of the entire drive. A new camera was put to use, to capture the side view. All shot at 4 fps, it will be speeded up as it plays back.

Downloading the photos, it was then the videos. With so many movies, already from driving to bag the Benchmark, it’s to take some time.

My plans are for more Desert hiking, so stay tuned. I ought to have marvelous hikes and touring, starting next month. The weather is now nice, and likely less or no smoke where I’m going. Going to be fantastic, too bad the Club got rid of us. My car could take 4 others, but due to the ban, there won’t be any. I have my offers, but due to the pandemic, I support safety, so masks and being covid-free is required to ride along.

I now have tested negative three times, so I’m good at being safe. I flew to LAX, dined at restaurants, and went shopping, all with a double mask and face shield. The vaccine should be coming shortly, so this may all be over soon.