Up early, I wondered what to do today, this smoky Wednesday. They report the fall colors as now. I usually make a trip to Hope Valley, so I saw by the Net, the colors were there. Taking U. S. 50, I passed through Carson City, and headed south on U. S. 395. Through Minden, NV, I passed into California on Highway 88. I had my Rove cam running, so it was all captured. 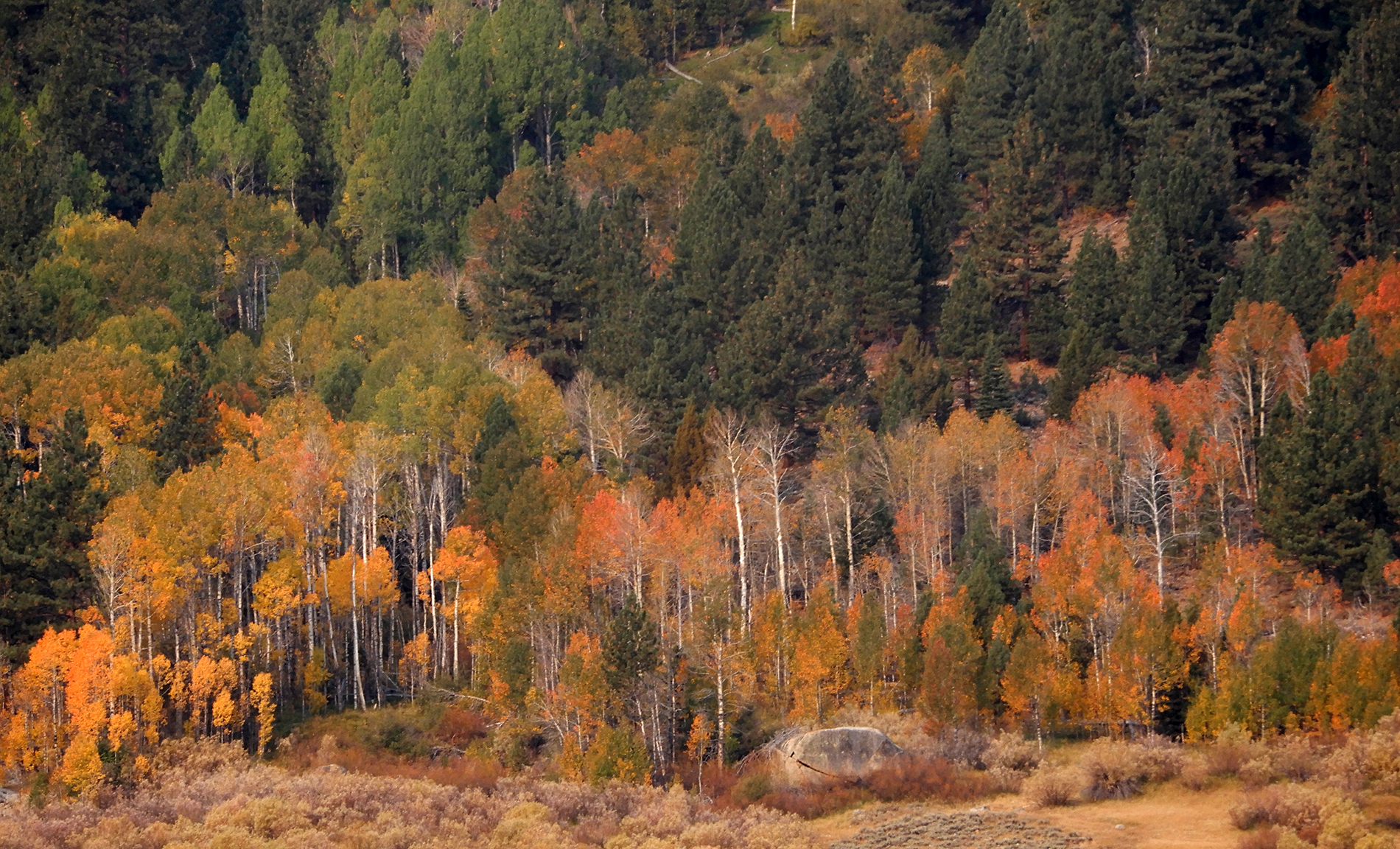 To the new resort, the aspen had only begun to turn. Heading on, the colors weren’t at peak, by me. I made a few stops for photos, then headed up CA 89 to Taylor Creek USFS Rec Area. It was closed, and though I looked on the Net, I saw nothing to this effect. Nothing about this on the USFS website. Stopping by the USFS Supervisor's Office, they were also closed.

Going back into town, I stopped at the Superchargers in a casino garage. Using the restroom, they didn’t know if they took convenience payment. Skipping then on lunch at the Oyster Bar, I took NV 28 north. The roadside scenic vistapoints of the Lake were all closed. Stopping at Sand Harbor Nevada State Park, they were open, but didn’t take convenience payment. Saving my $10, I went on to the Tunnel Creek parking lot. The parking rate at that time was $2.50/hour. Not worth it to me, I stopped at the information center to get directions for another Lake view. 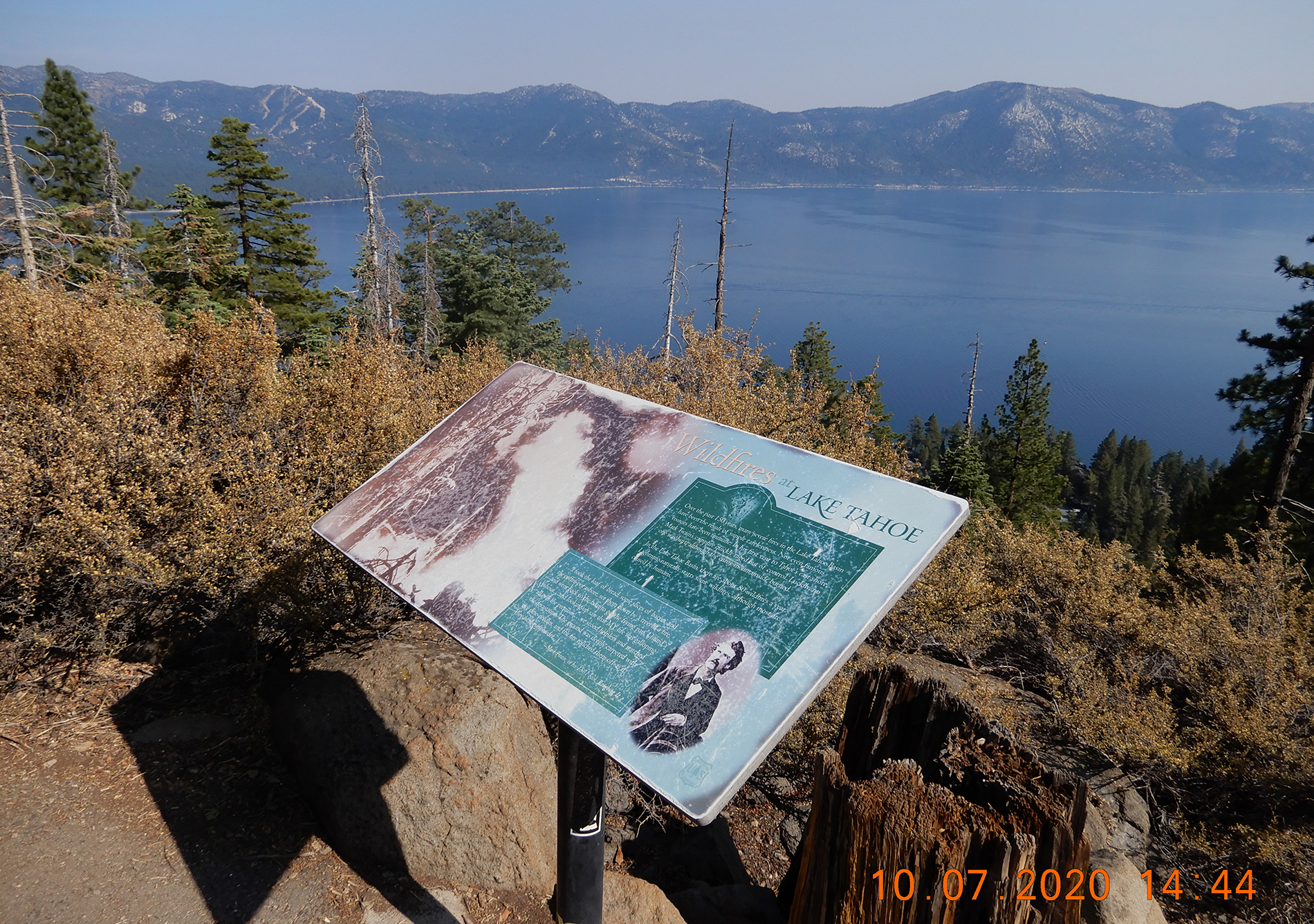 There’s the Stateline Fire Lookout trail, and my car navigator took me right to it. Hiking up the road, I saw a bench and a sign. This goes to a paved footpath with more signs and views. Looping about, it took me back to the road. I kept the stats on my Watch, so about 1.47 miles round trip, with 297 feet gain.

With the dash cam running, I took NV 431 over Sierra Summit, with a stop at the scenic overlook. Some guys' car was leaking water or oil, so they left the spill. I took photos, and then motored on to Reno.

Going to the Huffaker Hills trailhead, it was still early enough to do both Rattlesnake and Twin. Both of them together were another 1.62 miles round trip with 367 feet of gain, plus then 1.81 miles and 213 feet of gain. The registers needed some care and replacement. The register cans on Twin were then hidden, so only one sign-in. I left it to be more visible, and hiked back down to get ready for a good dinner.

The ramen place nearby was busy, so I got a hot dog and zoomed east on Interstate 80. Stopping in Fernley at a ribs house, I was safe enough with my masks and face shield. Not really busy, I ordered a sandwich. They gave me plenty of bbq sauce, so it was okay. With other diners coming by close, I didn’t leave a big tip.

Home then by about 8:55 p.m., I got to the downloads. A good, successful day, with a peak, and a new short hike. I have video of CA 88 both ways, so if anybody was interested, they can see it as soon as I post it.

Also, I had stopped at the library in South Lake Tahoe to check my website. The 4K videos were loaded and viewed okay. They had a Covid testing op nearby, so I took the time to register by my phone, as their bar code and website didn’t work. I get the results back in 4-6 days due to the situation. Speaking a lot with the nurse, she said that sunlight didn’t kill the virus, so outdoors isn’t really too safe. She didn’t think that hikers passing close by on narrow trails was much of a risk.

So, my third time tested, and I feel okay right now. On October 11, I received my test results--negative. There was some risk at the ribs house, with other diners. Some closer than 20 feet, though I’ve been okay, I don’t like it that they all say 6 feet.

Charging the car for more, tomorrow, there’s still a lot of smoke. Doubtful to be doing another trip before the smoke disappears, I’ve been busy with more investments and my move. To get some more gain with the market so low, and then the economy may someday boom again.

Trying to sell the new car, it has a cosmetic dent, and some 9,000+ miles. I’d lose then some $3,000 from the purchase price, but with my investments, this’ll be paid for. With no dent repair, my insurance premium won’t be going up.

Right now, the plan is to move to Las Vegas, NV, for the winter. This depends on a lot of things. Then to move in to my new home. I’ll really be in debt, so this maybe isn’t a great idea. This all depends on the future, which some say is going to be really bad. They don’t say when, but I hope to be okay.

If there’s bad inflation, I should get COLAs. The worst that can happen is that my benefits get cut off. My plan in this case is to get a roomer, to pay the bills. I’ll have plenty of room in the new house. With all my tech, we should be okay, with 4K movies and great music sound. I could always sell, and then move into a cheaper house. This’d pay off the debt, and then it’s food by growing it ourselves.

I already voted, and it was mostly none of the above. There’s hate in both parties, so I don’t vote for hate. I voted for the incumbent congressman, as the opponent may support the hateful, violent, hiking club. The election will be interesting, though I’m biased and would want to see who’s better for the planet to win. Voting yes on greener and cleaner energy, this is way too late, as climate change is long already upon us all.

Good to move back to a cooler climate, and out of flood danger, and though there’s fires, the responders have been fine. I’ll have indoor stairs to climb in case of hazardous air pollution, and then a few air filters going full time. They say many citizens will be moving to cooler, so the hatred back in my home town will be miserable. My thinking and investments have been so good, it’s to be worth a lot, when in 15-30 years, if I’m still alive. Just to see what the future brings, and it’ll be peak bagging for me for my health.