Having a million and one things to do, and thousands of slow moving people with nothing else better to do than to get in my way and take up tons of my time, I was unable to do very much aside from the priority items that I’m forced to. Locally, harassed and annoyed, with no help, even at $100/hour, for anything that I really need, I’m charting a new path for my life. Thanks to highly useful, professional assist, I am able to get a new start in a new world to explore, and hopefully, it will come to reward.

Nice to do some more good dining and walking locally, with better than ever tech, the distant future seems promising. However, with one misfortune, this can all disappear. Rather than have any concern with how things are going, people chose to remain in their stupors, listlessly being blocks to travel, and progress. This may soon be removed from my life, as a beginning awaits for me, afar.

Up so early on this fine Saturday, I sought to combine travel with business. Perhaps the biggest single event in my life awaited my approval, and that was dependent on the excellent, professional work of so many. Taking off by about 3 a.m., I motored south on U.S. 99, my dash cam running and recording on the entire trip. Mariposa Road was paved anew, and I tended to go fast on the fresh blacktop. On my usual shortcut, I came to get gas at 2.959 in Oakdale, and then on 120 east. With diet soda and coffee, I looked for a restroom in a few spots where they might have put up some new ones. Holding it in till Groveland, the city park facility gratefully wasn’t locked shut.

Still dark as I passed the Rim of the World Overlook, I stopped for a video op at the Yosemite National Park entrance sign. Before 7 a.m., the entry kiosk was closed. I liked the sight of the profuse fall colors, in the dawn, and snow next to the roadway. Feeling good, I opted to go to the Valley. At Half Dome view, I set my video to run, but had to pull over to do some adjusting. Going through the three tunnels, I soon came to the Valley floor, and motored along the Merced River. It was early in the morning, so few cars and people. The colors would be better in sun, but I am poor, and with little time to waste. It took then under 29 minutes to come to the Village parking lot. 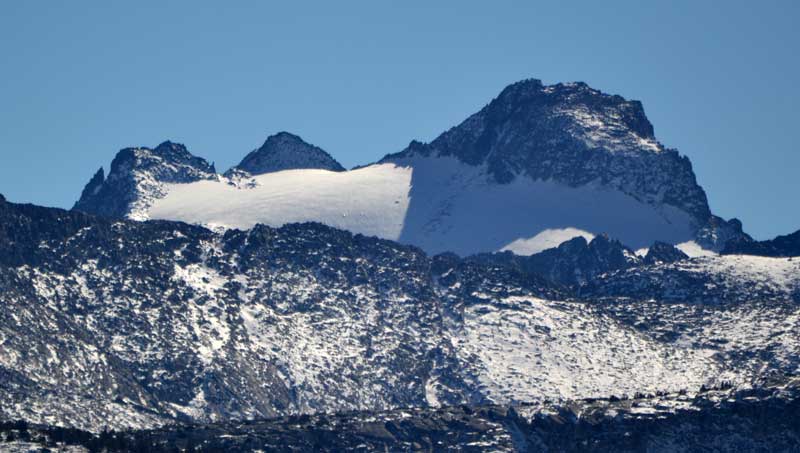 Strolling about the Village, I captured a nice telephoto of Lost Arrow Spire in the sun’s rising. Buying some diet soda, I did another video soliloquy with my consuming the fluids, and took more photos while on my Village wander. Seeking a peak to do today, I shortly motored off, with my two cameras running, capturing the roadway sights a bit better. I sought to record with my dash cam this entire drive, with four 32 GB memory cards, and an extra hard drive for storage and back-up.

Getting to 120 East, I was met by closed facilities, and did a short walk to try to get to some at Mariposa Grove. The outhouses were locked, so I declined to pollute, and held it in till I got to a nice facility further east up the highway. I set my camera to run video again, and I came to Tuolumne Meadows.

With good time, I hiked to the top of Lembert Dome. Taking photos as I climbed up the trail, I ran into other hikers, none of them carrying as much as I was. It was a nice day, with little snow on the trail, and some in T-shirt and shorts. I was the only one, that I saw, to go to the top, where it was a bit breezy. I spent plenty of time, doing telephotos, and 360 degree panoramas.

I had it in mind to lodge in Mammoth Lakes, CA, but feeling so good, and with cheaper in Carson City, NV, I hiked down and motored east over Tioga Pass. In my younger days, I might have sought to bag also Tioga Peak (11,513'), as I had time but less energy. Setting the video as I motored on down, I’d repeat capturing the drive to Mono Lake vista.

The gas station allowed for a break, and I motored on north along U.S. 395. I had changed memory cards, now on my third one for the day. Declining to do better editable video as I passed down the Walker River Canyon, I’m still not that sure on how legal this is. It would be great to have a smart rear view mirror, with camera pointed forward, and information displayed on the mirror. I saw such a claim, but haven’t looked into it yet. Voice control, though, would probably be defeated on the market due to road noise and passengers who won’t be quiet, and dictation doesn’t work so well, anyway, when I have music playing.

Stopping for a Cobb Salad at the casino turned motel by Topaz Lake, I rested and rehydrated. Motoring into Carson City, NV, I beelined to my motel, with good, speedy, check-in. I had to fiddle with storing my data and clearing out a memory card for further use on this trip.

Up by about 2:15 a.m., Sunday, I played with my device, and got the news. Finally stepping out for breakfast, I had steak and eggs. I’d be trying for another peak, today. I had Duane Bliss Peak (8,658') in mind, so I motored up to the Spooner Summit picnic area and trailhead. Alone, I made my start. Hiking up the trail, I felt good. I had read my old directions, but I didn’t save them to memory. Passing the two roads that I described, I ran into two trail runners coming back. Feeling now that it would be the same old thing, and with the hazard of going off trail, I hiked further south along the Tahoe Rim Trail, and came to another road with signs. One sign indicated a “Lake View.” A mountain biker told me that it was worth it and not that far.

Resting and drinking water, and using my pee bottle, I enjoyed the hike up through the forest. I was careful on the icy snow covering the trail, then, in about an hour from the road, where I had seen a vehicle, I reached some rocks that might be a likely view. Doing my camera work, this might perhaps be the best eastern view of Lake Tahoe. An unimpeded vista contained Glenbrook Bay nicely, and though there was no drama, I did my summit twirl and panoramas, making use of my latest new handheld device and software. 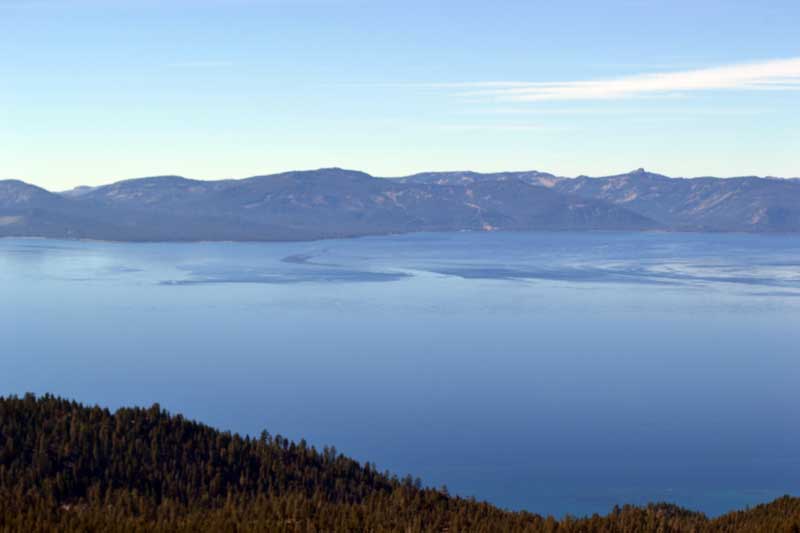 Determining that I might even count this as a peak, it was hard to tell what was highest. No register. Genoa Peak (9,150') is further along, and South Camp Peak (8,866') was in the vicinity. I’d do research on the Net to decide later whether to count this, as it certainly is a nice vista. I did another summit twirl on the highest rocks along the trail, and then the mountain biker came along back. This was 10 miles round trip by the signs, and comparable in height to the other peaks, here.

Hiking back down, I had another room reservation in Reno, NV, and business on Monday. A couple other users came up, and I made fair time back to the car. Emptying my bottle into the restroom toilet, I took my time leaving, and then was motoring back down to Carson City, where I stopped for drink and a sandwich.

Motoring north on U.S. 395, a big regret was not setting my good camera for a spectacular red sunset as I came to Reno. Pulling into the hotel garage at magic hour, someday they may allow for color correction on the dash cam movies. Coders have apparently already broken encryption for copy protection, and big artists must be losing big due to such piracy. I pay for music and movies, but then, other people have no qualms about stealing.

I took a shampoo, and knew that I’d be going home on the next day. Only the drive home to be recorded. Getting the news, I enjoyed the upgraded suite, and see that money is being invested. Going for food, I had fried oysters and clam chowder. Slimming down, though, will be a top priority once I can get to it! 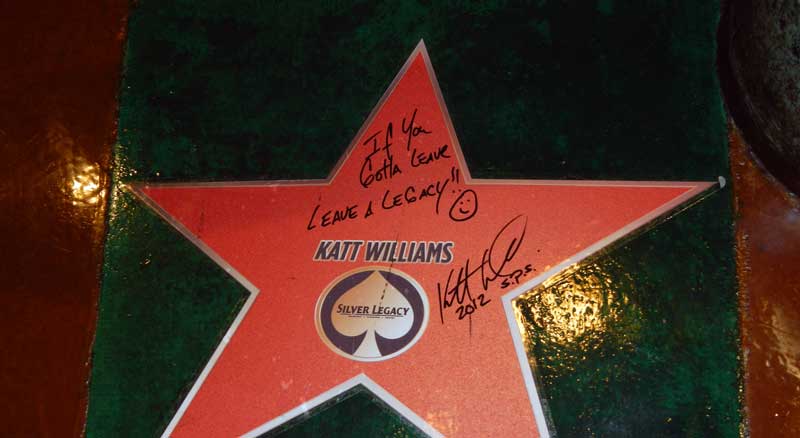 Asleep early, then up at about midnight, I tended to things. Making in-room coffee, I went for breakfast by about 2:30 a.m., to enjoy too much food for this trip. They have added some new photo ops for tourists, with a walk of stars. Going back up to my room on the 19th floor, I watched the HDTV and did various video time lapses of the sunrise view to the north.

I had my business which prompted this trip. My forgetfulness caused me to scramble trying to do things, and I had to contact people. Tired and sleepy, I had to get money. My appointment necessitated going back for a money gram, and I cruised, getting a dollar burger and seeing neighborhoods. I had boasted to my old buddies about how good it’d be for me, and by the end of the session, it looked real good!

Motoring on home, I made a stop at the enviro outdoor clothing store, and splurged. This was a moment to celebrate! I am sure that whatever obstacles to enjoying a substantial change of scene will be passed, and then comes some fun that in my younger days, I would have never thought that I’d be doing!

Too tired and drowsy to do any hiking on the way home, my thought was just to get safely back to my computer. Making several stops, I had food in Colfax, then swung by Griffith Quarry. Feeling some agony in getting home, I made it, and the downloads of all the video took three hours. Busy, though, at the same time, unpacking and washing up, it will be a double whammy to my past ways of no high tech, and renting. Expenditures may break me with a bad economy, but the forecast is rosy, and my money is better protected. Things will be busy, but when it all gets done, it will be glorious!

Hiking 14 miles with about 2,500 feet of gain, I captured 1,173 images and movie clips, with an additional 15 hours of dash cam video. Driving 592 miles, I spent about $133 cash for food and gas, maybe 95 for lodging, 239 for clothes, and business expenses. Leaving town with a near full tank and coming back with under half, I fueled up some 10 gallons enroute.

It may sooner than I had thought that I’ll have zero emissions, and clean energy fueling my local travels and hiking. Hiking a peak right from my door, and luxury all mine, not rented or borrowed. I’ll be getting presents to myself for a good time through the holidays, but the best one may never ever be forthcoming. A good peak partner, loyal, sharing, and never at odds, but supportive, is still too much to ask for!