Eagerly waiting for news of the arrival of my life changing moment, I got up early after a restless sleep. I'm now partially occupied by posting to my new web presence at https://www.facebook.com/pages/Thousand-Peaks-Club/724781380938192, the Thousand Peaks Club. Buying some music, I tended to online things, and then left home for my auto maintenance. Zooming eastward on the Interstate, I passed through what fog, and came to the dealership. I only had driven some 3,000 miles between service, being that I had been occupied by my searching. Thankfully, they didn’t find much major, and my bill was gratefully low.

Looking for an electric car, to complement my cleaner and greener travel philosophy, I determined that the manufacture was mainly foreign, and without prompt service, I had to leave. Beelining to the casino, I was hungry. My dash cam was running for this whole trip, but I had neglected to bring my better cameras, being that I don’t wish to risk being pulled over. An accident might cause liability and some fines! Having a fine breakfast of steak and eggs, I ventured that with the quick auto service, I’d go for a hike.

Motoring through the town of Lincoln, CA, I was surprised to see some economic revival. Having my directions in mind, I took the roads towards Hidden Falls Regional Park, with signs indicating “wine tour,” as part of my route. Beautiful! Many exotic animals grazed along the way, and I relished capturing the sights. 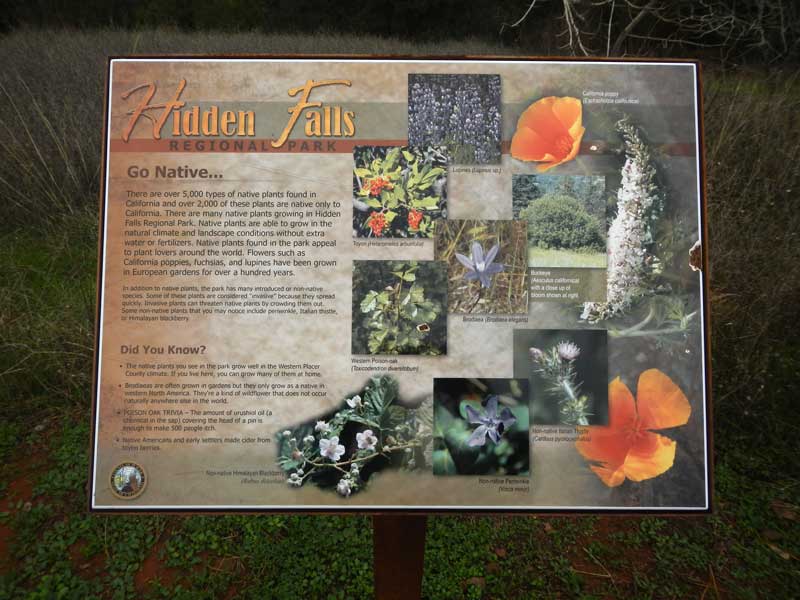 Getting to the trailhead, I checked my mail, and couldn’t hardly help crying from the beauty of the song and the idea of the newly released movie inspired by a backpack of the Pacific Crest Trail. Using the restroom, there were flush toilets. I took photos of the signs again, and took the Poppy Loop, for my exercise. I had an appointment for the afternoon, so didn’t have time to go to the falls. The sky was grey, though a major storm was due the next day. Speaking with a mountain biker, he said that the trails weren’t too muddy yet, though his tires were dirty. Taking lots of photos of the sights, I hiked on down, solo once again.

A horseman came by, and we had a short chat. When I’m aged and unable to physically hike far, this might be an option. Though he stated “300” a month for feed. Continuing down to a cascade, I took video, and then more along further. My turnaround point was the main bridge, and the falls would be running well. Taking the dirt road back, I was mindful of the time. I didn’t start up my hiking apps, being that they aren’t very accurate, even though I had upgraded to premium on one, and I will go with the phone manufacturer health software numbers. There were a few other people, not too smart by their conduct, and then I was back to the parking lot. 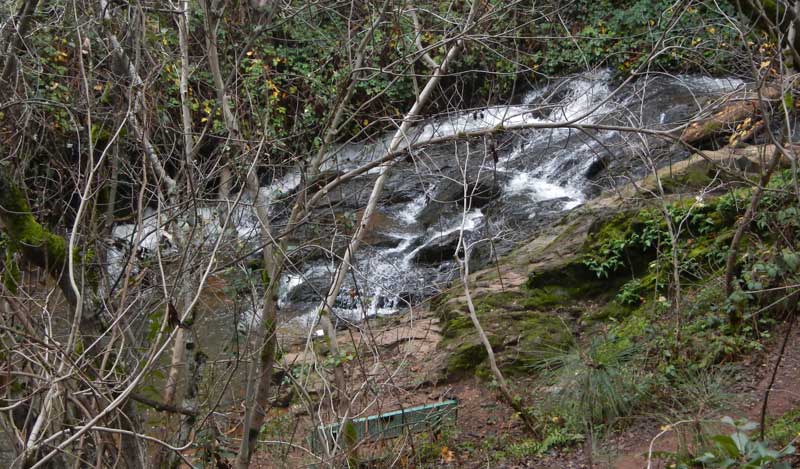 Good on time, I was to make good use of the fuel that I was using for this jaunt. Dash cam running, I motored through Auburn, CA, on CA 49 south. Whether I put any of it online remains to be seen. I thought that the hiking club attorneys would claim “slander,” as to the truth about bad drivers and resident citizens. All the congestion, bad planning, and confusion of urban living was captured in full.

Motoring westward back on the Interstate, I stopped for drink at a supermarket. Donating a dollar to charity after using the restroom, I got back onto the freeway, and sought to make good, safe time, to my appointment. That went fine.

Seeking to look about the new 4K UHD TVs, I stopped by an electronics super store, which I have been faithfully supporting. They didn’t have what I wanted on display, nor any trade-in discounts, or store shipping to the location of my future. I got a few items, and left for home. Finding that a furniture house had changed to a superstore, I took the Interstate back east to finish my day’s excursion. My phone calling back home revealed that I indeed would get my life changing event, though plenty of work and help will be needed. So, goodbye, Sacramento! Although my plans are for returns to do business, see the old sights, and pass through on my way back to my trad hiking ops.

Doing then 3.91 miles and 13 flights of stairs by my more reliable app, I captured 117 images and movie clips (25.4 MB, 720p HD, 1:16). Failing to record my odometer readings as I left and returned, I surmise that it’s roughly the same as a similar trip, about 90 miles. Spending only about 6 on drink, and 20 for the breakfast, then maybe 2 for a new light to use about home, supporting LED technology, once again.