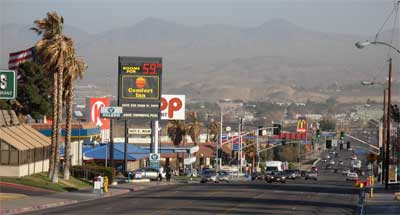 With rain forecast locally for the next four days, and good weather down south, it was an easy choice to get going on my Desert Winter 2007 road trip. I had hoped to go over the Christmas holidays, but lethargy and lack of a partner decided that, then. Having to pack up and make arrangements the day before, I had to leave without much cash. Planning to be pretty frugal, I would use plastic for the motels, and for maybe some finer dining.

Taking off Sunday morning at 7:20 a.m., I headed south on Interstate 5. I had wondered about making it to Phoenix or Tucson in a long, one day, push, but settled on driving to Barstow, CA. Not having done much recently, I thought to take it easy on my first day. Walking about Barstow's Main Street, old Route 66 (photo top left), for some exercise, I endured the high winds, up to 47 mph gusts.

Monday, I headed south on CA 247 and then to Joshua Tree National Park. I easily hiked Ryan Mountain for my 5x, and enjoyed the clear views of the high Southern California peaks. I made some photo stops, as the Cholla Gardens, and then the General Patton Museum. Upon getting again onto Interstate 10, I sped eastward to Phoenix, AZ. The Kofa Mountains, Eagletail Mountains, and the small, freeway exit, businesses made for some interest.

Securing a motel room in Phoenix quickly, I motored about in the night to see the town. Someday I'll do an urban hike. Dining out, I enjoyed a nice meal with plenty of fresh, stir fried vegetables. 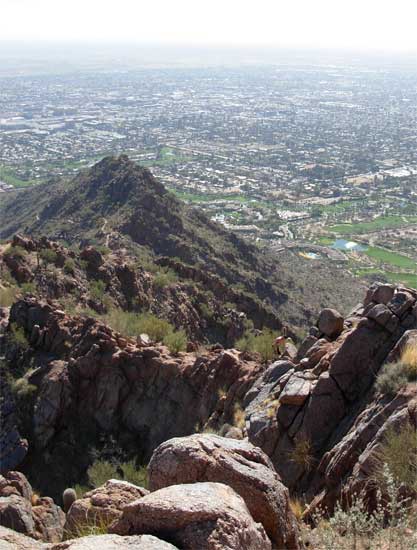 So, Tuesday morning, I motored through town with busy, rush hour, traffic to my first new peak for this trip. Camelback Mountain is the highest of the Phoenix urban park peaks, so it was my first choice. This is a highly popular trail from Echo Canyon, the standard way up. Many other hikers, lots with music players, had taken off up the trail. It was wiser to pick a day midweek, since this trail is said to have hundreds of users on weekends. I was thus able to get a parking spot right away.

With handrails and steps, I quickly ascended to the top, stripping off a layer or three as it warmed up. The urban vistas were awesome. I snapped many photos of the distant highrises as I hiked up, and marveled at the size of this desert metropolis. Gaining a view (photo right) of the more challenging route from the south, I will have to wait to try that someday, perhaps.

Back to the car, I motored over to the next peak. Piestewa Peak is named after a Hopi soldier who lost her life during the Iraq War. I was never to see any signs or other references indicating the name change, and locals referred to the peak with the older name.

Starting up at 12:10 p.m., I took the steep trail to the summit. Many hikers used this trail, too. I viewed the sight of Camelback Mountain to the south, and it made a dramatic appearance.

Many hikers apparently do not climb the easy class 2 rocks to the true summit, which I easily did. My time was about an hour to the top, as with the previous peak. A few joined me. Enjoying the beautiful day, I shortly left the summit and headed back down.

I wished to drive to Tucson, where lodging was a bit cheaper. There was a nice sunset as I motored southeast along Interstate 10. I had had a few traffic slowdowns, and then, coming into the town, I again quickly secured a motel room. This now seemed so much nicer than looking for a spot in a nearly full campground, or for a desolate campspot. I motored about town at night here too, looking for a place to eat. Wanting to pursue more culinary interests, I got some Chinese food and dined well, then.

Now, Wednesday, I woke up and drove to the Sentinel Peak Park for my easy hike to the first of two smaller hills. The gate was closed; it was 5 minutes early. Nobody around. So, I went back for breakfast to wake up more with diet soda and fast food, and wait for the park to open. Back to the park after a half hour, workers let me in. There are two gates, each with different times to open. I drove up to a magnificent morning vista of Tucson. I shot many photos, and later, a roadrunner posed nicely for a photo. It is a short use trail to the top of "A" Mountain, passing by the red, white, and blue "A." The top was rent with litter and graffiti, unfortunately. 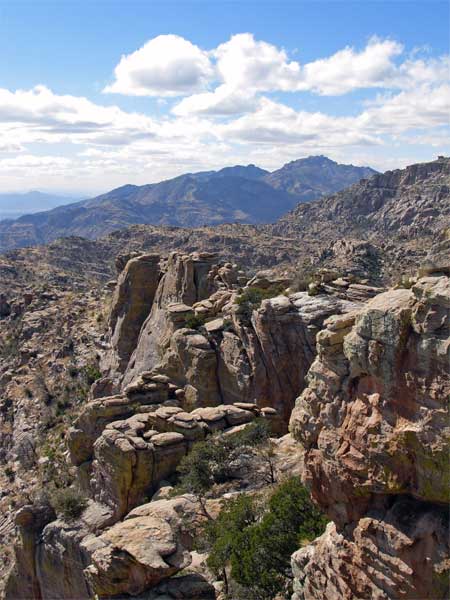 Finished with the photo hike, I motored back down the paved road to the lower parking lot for the second hike. Taking the signed Sentinel Ridge Trail, I crossed a downed barbed wire fence and took the use trail toward Tumamoc Hill summit. Surveyors on top told me that hikers weren't supposed to be up there, although two women hikers had directed me to the top, saying nothing about that. They left me alone enough to get my photos from the top, and one of these University of Arizona people told me about some petroglyphs nearby. I found some, and snapped photos.

Back to the car, I motored east along Speedway Boulevard to look at the Catalina Highway. Hoping to drive-up Mount Lemmon (9,157'), I was to enjoy the scenery instead. The road to the top was closed, by snow. Coming to the ski area, the summit road was gated there. No resort skiing, too, although there seemed to be plenty of snow. I stopped back at a lower scenic view point to take more photos (left).

You need to pay for a permit to park along the highway, or have and use a Golden Eagle Pass, as I did. There is a wilderness area to the west. Many cyclists used this highway, and I'd imagine it is a nice downhill cruise back to town.

Then, for me, it was south through town to get back to the Interstate. Quite busy traffic.