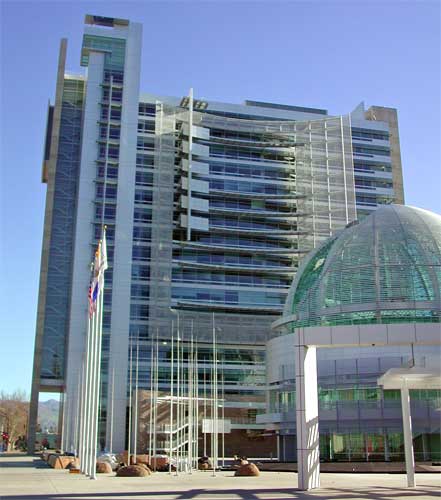 Seeking to get out this fine weekend, and enjoy hiking something new, I left home to motor westbound on Interstate 80, and then take Interstate 680 south. I have never walked about San Jose, CA, and armed with new information, I sought to hike the Downtown area, and a newer bike trail.

Exiting the freeway, I drove toward the big highrises, and parked along Almaden Boulevard. Sauntering down the line of tall buildings, I snapped some photos as I could see them. The morning light wasn't kind, and I kept track of the eateries. The skyscrapers aren't as tall as I expected, and there really aren't that many of them.

Passing the modern looking City Hall, I tried to make a loop of this city hike. I noted the old hotels, and offices of the software company. Many tall palm trees lined some streets. I soon came back to my car. Motoring west, I parked at the green arena next to the HP Pavilion, and sought to check the Guadalupe River Parkway.

This is a signed "4.6 mile" paved trail, and I used the facility before heading out. Taking the western side, first, I soon came to a railroad underpass where one must walk a regular bike. This new trail is not as completed as I heard. I intended to enter the visitor center, which was closed. Trying to do a loop, I had to turn around due to a closed section, and hike a few more distances.

Spending then about an hour, I had been disgusted at the amount of litter and rubbish caught in the riparian brush. This river does flood, and clean-up efforts must be futile. Too much of an urban park! 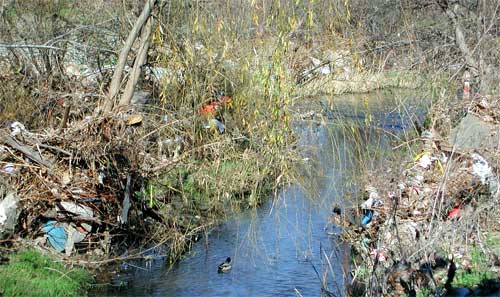 I shortly left the town, and had a brief lunch along I-680. I would take CA 84, then I-580 to I-5 and Stockton, CA, and perhaps do a hike, there, too. I found again that the bike trail here along the Calaveras River is poorly signed, if at all. I looked for a park, or place, where I could leave my car and access the bike trail, but not having any good maps, and never thinking I'd be doing this, today, went back to the Interstate, fruitless.

North on Interstate 5, I took the Twin Cities Road exit and motored to the Cosumnes River Preserve. I checked the visitor center, and took the paved walkway over the slough and into the Preserve. Heading right (south), I passed some red leaves, and then came to a flooded part of the dirt trail. Turning back, I checked the north end of this nature trail, which now has numbered signs to point out items of interest.

Back to my car, I motored back into town, and completed this day early. 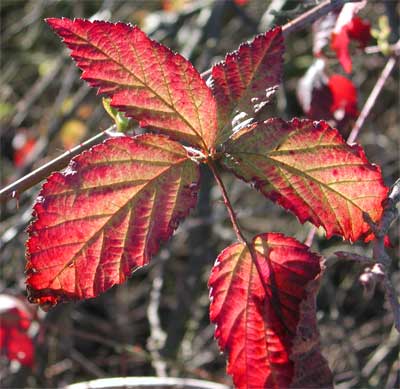 I had hiked maybe 3 miles total, and all flat. I shot 160 images, and spent only for a small bite, and gas. I got better than 40 mpg, and noted what was new along these byways and highways, this day.

I had three layers to start, but I really only needed a T-shirt. Long pants were fine. Soon, the daytime temperatures will rise, further, and I will be thinking of the High Sierra, once again.