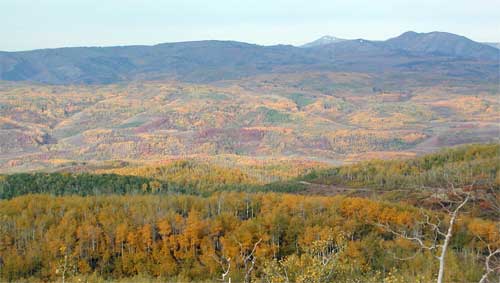 Sunday was to be a relax and travel day. I slept later, and wanted to see more of the north part of the state. Highway 39 was supposed to have some of the best color, by the USFS. I motored, then, east out of Ogden, to North Ogden Canyon. More glorious color was lighted by diffuse sun. I stopped here and there for photo ops, and passed Pineview Reservoir. Many nice camping ops. I motored up a large mountain grade to a spot known as Monte Cristo. The higher aspen were a bit past peak, but vast stands were still gold and red. I stopped at a grand vista point, and took many photos.

Returning to Ogden, I had a nice, light, breakfast. Then back to Interstate 15, I motored south. My next goal of this day was to revisit the Alpine Scenic Drive, Highway 92. Being Sunday, the roads were jammed. A few apparently disgusted drivers turned around and headed out. I persevered, and found the wait on the highway wasn't long. The rangers were waving all cars through. No fee collection or park passport check.

I escaped some of the crowds, past the Timpanogos Cave parking, and motored up, seeking a good vista point. The road is narrow, with poor pullouts and mostly no shoulder. It had been one-way only, years ago. I came to the high pass, and took trails upwards to catch a view. No dice. I would miss some photo ops, but the aspen were well into gorgeous color, unlike in some years' past. I managed a few photo stops on the far side of this drive, and passed by the famous Sundance Resort.

Getting rest, food, and drink back in Provo, I wondered about my next planned peak. The forecast was now for a storm, Monday. I wanted Delano Peak (12,173'), the highpoint of both Piute and Beaver Counties. It is an easier hike, but with rough road. I zoomed south on Interstate 15, to the town of Beaver, and checked for a cheap motel. I figured to camp, when I spotted a signed, lower room rate. I rested and watched the TV news, and it didn't look real good. 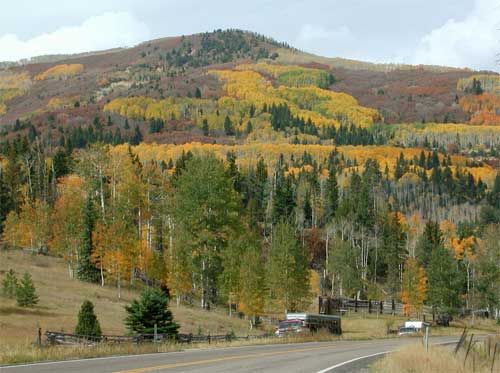 Waking up Monday, the sky was gloomy. With rain forecast, I opted to skip this peak. Bad enough with dirt road, no trail, and high elevation. So, then, it was south, again, on Interstate 15. The general forecast had changed for the week. Clouds and rain were now more probable. It had been to be a week of clear and sunny weather, forecast on the long range, when I had left home.

Coming to Cedar City, I headed up into the mountains to revisit Cedar Breaks National Monument. These massive cliffs offer interesting views, but more banal compared to the rest of the parks around here. But, it is a short drive off the Interstate.

After digitally capturing the usual views of the erosional forms, I motored up to nearby Brianhead, the highpoint of Iron County. This offers an easy drive-up, and the sight below of the ski area. It was very windy, with gusts up to 40+ mph, and I could hardly hold my camera steady. As a county highpoint, this would be my fifth counted peak for this trip. Respectable enough, now, for a solo trip in the fall.

I stopped back at more viewpoints of Cedar Breaks, and now didn't rush. Nothing to do but kill time, and try to enjoy, now. I was in Southern Utah! I took more photos on my drive back west on UT 14.

Back to Cedar City, I got another motel room, and had a light meal. After a short rest, I motored back up the highway, UT 14, to check on a side road with a signed vista point. This turned out to be nicely paved, to a great panorama of Cedar City and environs. A squall flashed with lightning to the north, and sun broke out on the city at times. I snapped away, enjoying what must be a rarely visited vista, with nice light.

Others then came by, and I left, the clouds having moved in. I returned to my motel, to make a two mile walk along the main street for exercise. I shot photos of the colorful business signs, as I do for my personal records. Then light rain fell, and a double rainbow, during the sunset, lit up the scene. Always worth it to travel!

Tuesday, my watch alarm woke me up at an earlier hour, and I wasted time looking for fast food and gas. Then, it was up UT 14 once again, eastward, and I mushed over new snow on the road. Down to Highway 89, rain came down heavily. My goal for today was the North Rim of the Grand Canyon. It began to look doubtful, but then the sky cleared to the south. With bright sun in Kanab, UT, I got more drink, and motored on south into Arizona.

The weather down here was much better. I had made the right call! The clouds parted, and I was motoring to the Kaibab Plateau. Nice distant views of the red cliffs, and then the forests of the high hills, were shot. A past fire had resulted in ongoing salvage logging, then it was into the still good National Park. My park passport saved me good money, and then it was a magnificent sight to come to the North Rim.

Backlighted, I had prepared for a mediocre photo op, but it was awesome! The haze wasn't bad, and many tourists lounged and hiked about. I snapped the vistas, and marveled at my good luck! Finally, I could count Bright Angel Point as a visited spot. I did the quarter mile walkway to the canyon overlook, and scrambled atop the rocks. It was time to enjoy, and contemplate! The fun I would have with my software to enhance the photos!

After checking out the various viewpoints, I enjoyed a soft drink in a wooden chair on the lodge deck. A moment to savor! So fewer people visit here, compared to the far more popular south rim. A multitude of languages was heard, attesting to the many foreign tourists.

Then, it was time to leave. The light wasn't changing very fast, and I would have to wait for sunset to get a much different scene. Two other viewpoint destinations, Cape Royal and Point Imperial, were closed. Only too, for the day or few while I happened to be about here. Some sights to save for years from now, I guess, when another visit may be due.

Taking Alt 89 to AZ 389, then UT 59, back to Hurricane, UT, this is the fast way back to Interstate 15. I made a quick stop at Pipe Springs National Monument, enroute, a historic site.

Sights were good along AZ 389. Coming to a trailhead above Hurricane, UT, I had a great view of the town below. They must really think of photographers as they build a highway! I got more drink, then came to St. George, UT, to have my reserved room at an unbelievably low rate. As the sun set, I searched for a nice view of the town. I found two nice spots, and took advantage of the photo ops. The historic district is pretty small, but also made for another stop. A modest meal made for dinner, then I was back to my motel.