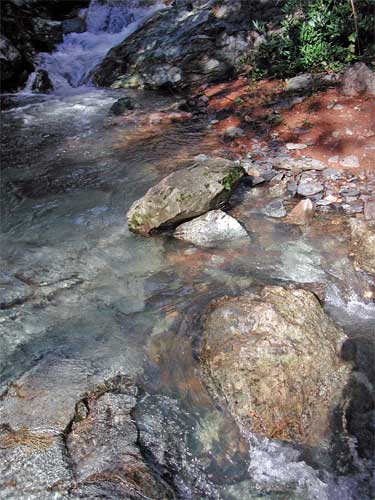 With nothing much to do this fine holiday weekend, I figured on doing this short hike. I took my light pack, with water and first-aid kit. The clothes I had on, three light top layers and EW bottoms under pants, were fine.

Leaving home in early morning, I ran into an Interstate 80 eastbound traffic jam outside of Applegate, CA. A couple lanes were blocked. Arriving in Colfax, CA, by about 9:30 a.m., I parked at the trailhead, and started my hike at 9:44 a.m. Only 3 cars were in the trailhead parking area. The first section of trail has been pretty drenched, but you can walk on the fallen leaves to avoid some of the red mud. There was some frost, hail, or snow.

Normally dry creeks crossing the trail were now filled with water. About four small cascades are encountered in the first fifteen minutes of the hike. I stopped to snap photos, and spied many fresh mushrooms popping out of the detritus. The fog persisted in the trees, and the sun poked out of the low clouds, some of the time.

Coming to the dirt road headed right (south), over a saddle, I took the hiker trail at the signed junction. I heard a roar, and a fall was going really good. That was the most water I have ever seen here. I tried to get photos, and clambered onto some rocks for a better vantage point. I didn't wish to get my pants dirty, so stayed off the wet, slick, class 2-3 rocks that I would have to top to get the best view. Most telephotos failed to turn out sharp enough.

Then, the first major stream to cross caused me some hesitation. Normally, it would be no problem. It was now a three foot jump, with possibly slippery rocks. I had on an old, worn, pair of boots, plus all the digital gear. A slip could send me into the turbulent water, and even over a 20 foot falls! I backtracked, looking for an easier way.

I went back to take the right fork, the signed, mountain biker's trail. No dice. It was still a three foot jump, although a bit safer. There are other side creeks ahead. I failed in my resolve, and turned back. I had some photos to post, and I could be back to my computer quickly.

Advising other hikers about this, I shortly came back to my car by 12:15 p.m. Getting a taco and small drink in Auburn, I was home after a quick check of the ads at my favorite electronics store.

I had hiked perhaps 2 miles, with 500' gain (mostly on the way back). I shot almost 120 still images and movie clips. I had filled up with gas at 2.339 in town, and saw it was about the same in the foothills, here.

Using a quarter tank for a bit over 100 miles, I was upset. I wish to keep my car tuned and running for maximum fuel efficiency. My car tires had perhaps suffered some misalignment when I parked against a curb. I'll have to get this checked later. I take note when my fuel consumption does seem up, a bit.