Wishing to hike during the dry period for these few days, I did some research on the Net and came up with this local wilderness park. Somebody had vaguely told me of this place, having a good vista of the area. 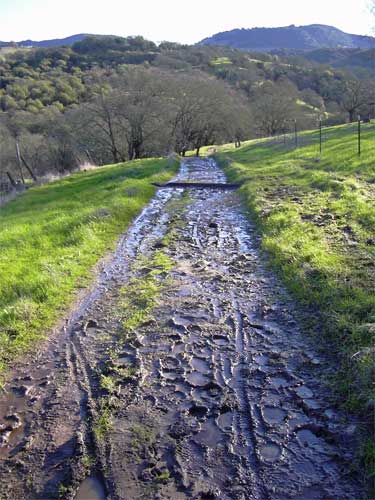 Motoring westbound on Interstate 80, I took the CA 12 West Exit and soon came to turn right on North Kelly Road. This eventually leads to Imola Avenue, where I got gas at 2.239. There are a complex of services here, with fast food and a supermarket. Imola Avenue is a main west-east artery in the town of Napa, CA, and can be reached from Highway 12 and 29, or any major north-south avenue.

Imola Avenue, east, becomes a rural byway, and shortly then comes to the signed Skyline Park. The day-use fee is $5, taken by a live person serving in an entrance station. I received a photocopy of the park map. I had to go back to the entrance station attendant, and get my bearings. He pointed in the direction of Sugarloaf Peak, which, of course, I have interest in.

From my maps off the Net, the elevation changes are slight. I expected an easy day, and to get home early. I started at about 9 a.m., on the way to the Manzanita Trail, heading north at first. The trail was very wet and muddy (photo, right), and many hazards for slipping currently exist on this route. I snapped photos as record, and made my way, with big guesses at times, to and along the Manzanita Trail. Rock walls adorn some of the park, here, as elsewhere. The trails are poorly signed, this way.

One trail offered a hazard with a small mudslide, cordoned off with yellow "caution" tape. I stumbled through, getting my fingers in mud. There are several ups and downs, and I finally reached the "Rim Rock" Trail, which leads to the top of Sugarloaf Peak. Some nice examples of the geology are passed along this trail, and shortly, the trail climbs up to the oak forested summit. Some nice views of Napa are seen before reaching the wooded top, and I had to go back to get some of those. I had topped out at about 11:10 a.m., a bit over two hours hiking time.

Two rock cairns along the trail mark the supposed, nearby highpoint. A clump of moss and lichen clad rocks under an oak tree seem to be the highest point. A hundred feet to the west, hiking through the spongy terrain, some views (photo below, left) of the town can be had. You can also see up the Napa Valley to Mt. St. Helena.

Not tarrying, I continued along the trail, southward. I gained a distant view of Mt. Diablo and the best view, I know, of faraway San Francisco from a North Bay peak. I had my film camera, so used up part of the roll of Kodachrome by using my big telephoto lenses to record the silhouettes of the highrises and the Golden Gate Bridge. All in backlight, of course. 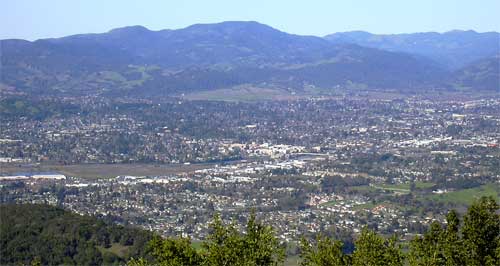 The trail descends via a few switchbacks, and shortly comes to the Bay Ridge Trail, running along the major creek. It is dark, but beautiful, down in the canyon, here. A few short cascades tumble down the creek, with some red rock dispersed among the other rocks. Puzzling to a geologist, perhaps, I recall local enviro hikers to think it was humorous to confound scientists, them presumably assuming no one would do that--moving rocks!

I passed Lake Marie, a muddy sump with a earthen dam. Seeing the first of a few hikers today, I sought to explore a bit, taking the Skyline Trail. An overlook was promised, though I never saw it. The junctions are better signed this way, and I assume this part of this park gets the most use.

I got to the Passini Road, an old gravel thru-way that made for faster hiking. People were coming up from the bottom. My old, $25, "eco-hiker" boots, made largely from recycled materials, began to separate. The sole of my right boot started to come loose. I didn't have my usual repair kit, as parachute cord or duct tape would have bound the flapping sole back to the boot. Fine, since I would still be able to hike, as the midsole was largely intact.

Not far from the start point, I came to a large urban park, and figured out my way back to the parking lot. My finish at 1:50 p.m. was a relief. These old boots coming apart at a less opportune time could have spoiled a good day.

I supposed my hike totaled some 6.5 miles and 1,800' gain. No mileages are posted on any sign, and on the back of the map photocopy are some stats. The trailhead elevation is given as "138 feet." I captured almost 150 images, mostly "record" shots. The sun was too harsh, and there was no diffuse light. Too dim in the trees, and too many shadows to spoil any precise exposure.

Obtaining some fast food and drink, I then whizzed home on the well traveling Interstate. I had spare boots, but declined any more hiking on this fine day. This was a first for me, so close to home. It's remarkable that primitive rec ops are being developed in what is mostly surrounding, private, land. This is indicated as "wilderness," in the context of coast range lands. In largely oak woodlands, I enjoyed spotting big mushrooms, hawks, and wild turkeys, apparently free from harvesting or poaching.

I spotted no ticks, or mosquitoes, of course. Signs warn of mountain lions, and wild pigs. Some trails are largely overgrown, and use or animal trails head everywhere. No cows. I came upon some steeper rocky sections, maybe even class 2, due to the uncertainty about traction with the dampness. I did see some white wildflowers, encouraging for those of us who await the Spring.

Starting with four layers, I stripped down to a Cap T and parka in the sun. My EW bottoms are so comfortable, I use them often with my regular pants. It was good to have a light cap to replace my insulated alpine cap, too.

Sadly for me, though, I count this as a "peak." It is not much of a challenge, but I did set standards, need the numbers, and the name says so. Recalling back with the old chapter, some hikers "did" lesser coast range bumps, therefore declaring three in a day, vigorously promoted by the then peak section. With some sorrow, I complied with the ways of the new officers, all declared as good fun by chapter overview, but demeans so poorly the rest of us, then, doing the big High Sierra peaks to count equally, all together, by enviro group order of law.