Wishing to do something on this fine day of recent, good weather, I relied upon my memory of such good walks about this highly cosmopolitan town. In 2003, I embarked on a urban hike with an old companion, but encountered dim, white light. It was time to rectify my photo notes with sun and slight clouds forecast.

I woke up this Thursday at about 3 a.m., as I often do, nowadays. I am so enamored of my computer and the Internet! I readied and took off by 6:35 a.m. Fog marred the drive south on Interstate 5, the Twin Cities Road, and then the Delta Highway, CA 160. There was a traffic jam on Highway CA 4, westbound. But then I came to Pittsburg, CA, and the Bay Point BART station. The regular parking lot is quite full at this time, about 8:30 a.m., but I secured a spot on a far side street. 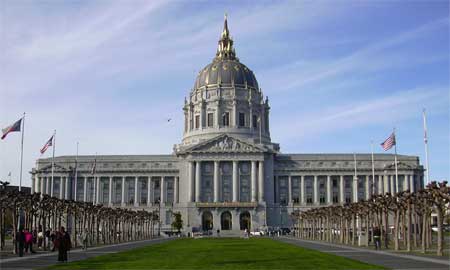 It runs some $5.30, one-way, to the Embarcadero Station, now, and I inserted a ten dollar bill into the ticket machine. I would deposit 60 cents at the add fee station when I returned. The ride was smooth, and many people use such great, modern, mass transit. I have good memories of the ease of travel, and walking sure beats trying to park!

The usual hour to get to Market Street greeted me with the sight of the towering buildings as I arrived, always a thrill and a pleasure. I had no need for coffee or food, so I timed my picture-taking with red lights. Stopped at a street corner, I'd snap a few photos as I waited. No time or effort to waste!

I would do my usual loop, catching City Hall, and other government buildings. All of the past construction was finished, and people can enjoy an entirely new city. I noted the new gold trim at City Hall, quite resplendent with its long past, completed, renovation. Many tourists abounded, and I then took Van Ness Avenue northward.

This street, otherwise U.S. 101, is lined with luxury car dealers, rental units, and other businesses. It leads up to North Point Street, where an old favorite outdoor clothing shop is located. I have my closets filled with this famous brand, accumulated over the decades. Much of my clothes don't get much use, being unnecessary for easy or moderate hikes. I have little venues for inclement conditions, now, with my choices for days to climb being usually what's good for photos--sun with a few clouds. Rain does keep me out of the backcountry, with no hikers as determined to get exercise, as myself, I guess. 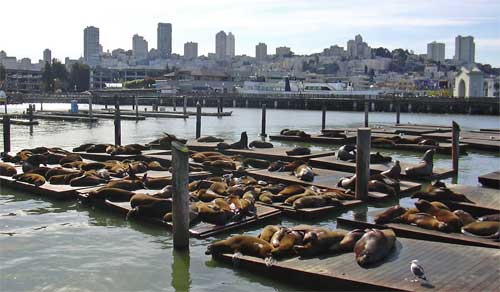 I visited the Maritime Museum, and noted the old sights of Fisherman's Wharf and Pier 39. A massive cruise ship was docked, and it seemed that not as many tourists were about here, despite the good weather. I got a nice shot (left) of the mostly sleeping sea lions on a dock especially built for them.

Climbing Telegraph Hill, with Coit Tower offering nice views, this would be my "uphill" for the day. Having visited here for some 50 years, now, I saw that the shrubbery has grown, blocking the vistas for those who do not pay to ride the elevator to the top of the tower. I snapped a few photos, and headed down to hike along Grant Street.

Being interested in architecture and business logos, I had a fun time taking so many photos. I try to keep people out of my pictures, to not offend, being such a shutterbug. But this town is probably used to tourists.

I had four memory cards, some smaller in size. I had to stop to change them, getting a can of soda, to sit, for a dollar, at one bakery. I was just not hungry enough to enjoy a fine meal, as once I did. There are many fine restaurants available, but I haven't the time or money to enjoy them all. I once offered a free meal at the Top of the Mark, my guess as to the finest luxury, gourmet dining, but was refused. What I try to do to get people to hike!

To beat the rush, I ambled through the Financial District and part of Chinatown to get back to the BART station by about 2 p.m. Nice to get a seat, and the ride was superb, again. I had some thought of side tripping to Berkeley, CA, but feared for falling asleep. It took about 50 minutes to get back to Pittsburg, CA.

Caught in another traffic jam along CA 4, I detoured to take a side road I knew from a bike ride I once took. To pedal up Mt. Diablo, from South Sacramento, and carrying camping gear, I completed a ride to the top of a "major California peak," and back. Thusly, I could claim an ascent, using totally non-motorized means from my home, then, done in two days of a holiday weekend in 1971 or so. Due to the new Antioch bridge, and increased traffic, this is highly unadvisable, now. Most everyone uses motorized transport to get to a mountain peak, but having being an enviro of sorts, back then, I'd do it, once, as John Muir might have liked!

The air was so clear on my drive back along the Delta. The Crystal Range was clearly seen, and I wished for a high powered telephoto lens to capture the river, and the peaks in the distance, both.

Stopping for a bit in Isleton, CA, I snapped a few more photos, but still wasn't hungry. I thought to catch the sunset, but it paled as the light disappeared.

I did some 5 miles with probably only 600' gain. Snapping well over 200 images, I spent only for slight food and drink at fast food eateries and the bakery, with the BART fare coming to $10.60 total. They didn't have any organic cotton T-shirts to my size, style, and liking, at the outdoor clothing shop, and, then, I passed on all the fine dining experiences.

Usually having a companion for this hike, I fail to interest anyone, now, in a midweek carpool and urban exploration to see what's new in this most beautiful of cities.