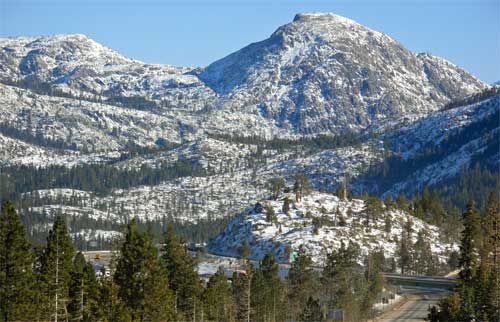 Seeking to further test out my new cameras, I made this trip up Interstate 80 to one of my favorite towns. There is an annoying traffic jam bottleneck, though, on the Interstate about Roseville, CA, that they are going to fix, shortly. Smooth driving, then, once past any lawsuits to stop this!

I stopped at Yuba Gap to shoot a few photos of the peaks seen from there. Old Man Mountain (top photo) is one of my most liked sights, having climbed it a few times.

Amazed by the astounding resolution, later on my computer, and the incredible job by my new VR feature, I will never now regret getting this new camera model! Snapshots that formerly would be blurred, past good use, came out very sharp. This is a camera made for the Interstate, as is my car! A passenger can snap the sights ahead, so well now, using the good telephoto feature, saving having to stop somewhere.

I stopped again at Donner Summit rest area, and also at the Donner Lake vista point. There isn't that much snow, yet, but it is good enough for pictures.

Truckee, CA, now has parking fee machines, so I avoided there. I came to the Patagonia Outlet, where I picked up an old jacket from repair. I picked up some $9 socks, a bit snug, but I had to get something. I hiked the nearby Truckee River Parkway West trail from Mayberry Park, and saw a couple other hikers, dogs, and runners on my short jaunt up "Patagonia Hill."

Motoring on, I took U.S. 395 south to go to another outlet store. I had seen some good deals on their website, but none of the footwear bargains panned out. No fits to my size. The prices on hiking boots are really going too high!

Figuring whether to make a loop south to U.S. 50, I decided to check out the nearby Rattlesnake Mountain (5,011'). I had hiked this small hill once upon a time, and had heard something recently about it.

Yes, there is a new Huffaker Hills trailhead, and a new trail (middle photo) leads to the top of the highest, east bump of a named, Twin Peaks (4,851'). The distances are short, and I spent only about an hour making a double bag, if I had been counting these. The fine lens brought in the distant Reno skyline (bottom photo), and I really marveled at the overall camera performance, later, at my computer! This technology, a.k.a. "image stabilization," should be urged acquired by all interested photographers! My new camera's lens does have some bad "bow," a slight curvature of straight lines in the final picture, but there is now affordable software that corrects this, I read.

I resolved to post some of my day's findings on another website, and so deemed to hurry home to do this. I wandered about the east part of town, and saw what I could see. No casino stops, today. Thirsty for some drink, I finally got back on the Interstate, and then found a fast food restaurant.

There was plenty of daylight left, but I feared for icy roads. It was down to subzero overnight in Truckee, and there was water on the freeway. Cruising back over Donner Summit, I speedily motored back to Auburn, CA, where I got some fast food. The Roseville traffic bottleneck again cost me about a half hour of delay, then I stopped, again, at my newly favored food co-op for some quick eats at a good, organic buffet.

I had hiked about 3 miles, and did roughly 700 feet of gain. I drove nearly 300 miles, and shot 200 images. My new memory cards are holding up well, and the cameras are doing fine. Hopefully they'll last another five years, as the older ones, so far. I'll expect some 50,000 more digital images to be captured, again.