It was about time for another Reno visit. The local group of the Sierra Club was having a slide show (digital) of magnificent Nevada wilderness, something I really like. I initially would have taken advantage of the great, low, midweek room rates at the major hotel casino, but I have to be frugal, and have hiked most of the areas about Reno, already.

I awoke at 4 a.m., to check the Net, then motored off at about 7 a.m. to get gas at 2.419. I didn't have much cash, so had to watch my spending. Headed eastbound on Interstate 80, I appreciated the fine road work that had been mostly completed over the years, with fine design, and a clean, dry roadway. I made a stop for drink, as it was warm in my three layers, and took a rest, too. 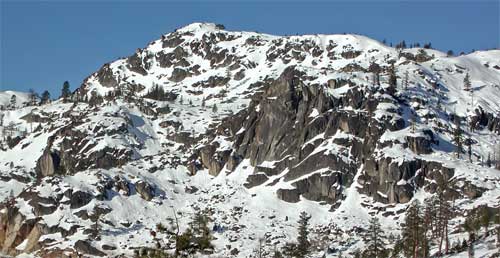 The snow levels are always of interest, being once a backcountry skier, and I like the convenience of the Interstate. Being midweek, there wasn't much traffic, and I saw no cars at the highest Sno-Park. I imagine cross-country skiing has fallen out of favor, as well as snowshoeing. Not many people were at the downhill resort, too, although it was early in the morning.

Seeking to visit the winter carnival in Truckee, CA, I found it was canceled due to warm weather. Imagining I'd see snow sculptures, ice palaces, and such, my disappointment was keen. And, now, there is metered parking on the main street in the historic, old part of this railroad and ski town.

I had made arrangements to drop off my collection of catalogs at the outdoor clothing outlet for use or recycle. I have long enjoyed this brand of clothes, with good value and a fine warranty. They took them, and I also then purchased a good selection of more fine winter and regular wear. Just plain out incredible deals!

Hiking the nearby trail up to the top of a small hill, I noted the lack of snow compared to the year before. Renoans can enjoy exercise without the hazard and impediments of the wet stuff. Then, three other hikers appeared as I was returning to my car. Yes, they were locals that I had hiked with, before, and they were headed for a cave known as hole-in-the-wall. It lies about a couple miles west, along the ditch dug into the side of the Mt. Rose massif, which is now a open trail. 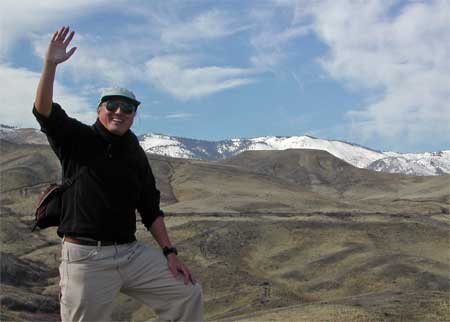 One fellow expressed his interest in peak climbing, so we went ahead and chatted. Perhaps we'd team up for some hikes, sometime. We quickly reached the cave, and I snapped photos as record. It is not much to see, but is of some historic interest, I think.

Two dirt bikers came by, and I asked if they had seen the other two hikers. We started back when one said, "No," and then found them a short way back, resting. The dog put its paws on me, checking me out, which means I will have to put my sweater into the laundry. No telling what that dog had put its paws into, on the trail! The sweater needed a good wash, anyway.

Leaving the group, I was back at my car after about an hour. I had thought to make a loop drive to Pyramid Lake, but that would add another 100 miles or so to my day's drive. No dramatic light, and there are plenty of things I can do at the casino.

First going to the library, there was a traveling exhibit on Anne Frank. The history of Nazi Germany and the Holocaust is something everyone should learn and remember. I read some magazines and papers, and then motored over to my favorite casino complex.

Having a burger after seeing what was new, I noted there weren't many patrons. I'd guess the price of gas has many staying home. I tried for a new car, and won a small amount. It went for a V-8 drink.

Now, I had to motor to the ranch house for the show. I meandered about southwest Reno, testing my memory. New development made everything look different. I had to go to the library to look at a map, then realized where it was.

Finding a vista point, I took many night photos. Most of them came out blurred, me trying to use a rock instead of a tripod, but I got a few good ones.

Everyone was friendly at the meeting. I helped set out some chairs, and people stood up to make announcements and reports. The crowd of 50 or so gave a good hand for some newly elected officers.

I recognized many of the mountains and locales in the presentation, and hope I can someday get a companion to visit them, again, or for the first time. There is a scenic area in Pershing County, similar to the City of Rocks in Idaho. I'd probably head there immediately for photos, if I knew where it was.

Many areas of Nevada have been recently placed into the national wilderness system. Good that such beautiful places have been recognized and legally protected!

The show was relatively brief, and I had to leave, as it ended, to get back home. I motored onto the Interstate, and made no stops. The roadway was dry, clean, and clear. Hardly ever before had I felt so safe on what was usually a madhouse of speeding drivers and masses of big rigs.

I'd hiked about 5 miles, with perhaps 600' gain. I spent for some food and soda, and about $20 for gas. When I pay off my other bills, I hope to start making more visits to this Nevada city, one of the fastest growing areas in the country. I'd love to have a home here, but for the colder winters. It is somewhat like my hometown, in size, when I was growing up in the 1950's and 60's.