Passing the summer away in a big relax mode, I figured it was time to do another peak. I have had other Augusts doing nothing, and if no one comes forward to climb and carpool with me, so be it. I met with a couple other interested persons at a Starbucks, to get to know each other before teaming up for a peak, or few. But nothing has come of that, yet.

After my Pacific Northwest Inner Loop, I had resolved to save my car miles for another road trip. I expected to go to Idaho, but the past month never had any bad, local, heat waves, to plan to leave. So, I spent time doing many 6 mile power walks to keep in shape, and hoped to slim down a bit. No chance!

My feet had begun acting up, too, with a strange callous, and sharp pains shooting through my feet in general. I figured they'd go away, but it did take some time. Some hikers offered to partner up for peaks after Labor Day, so I had better check on how my feet do, and make sure I can still do a peak hike!

Feeling dizzy the night before, and this early morning, I sought to do a minimal peak, so Ralston was the choice. If I didn't feel good enough upon arrival there, I'd do an auto loop about Lake Tahoe, or something.

Awakening before 4 a.m., Monday, Labor Day, I left home by 5:30 a.m. to motor up U.S. 50. I had a small, fast breakfast in Placerville, CA, and continued to the vicinity of Camp Sacramento, and the Mt. Ralston trailhead.

Starting my short climb at 7:45 a.m., I took the trail in good order. Making good time, I shortly stripped out of a light layer to my Cap T-shirt, wearing jeans, too. I kept close track of my time, taking two short breaks. Coming to the 8,500' high saddle by 9:30 a.m., I knew I was doing well. I took the trail over to the Ralston Crest, and easily found the distinct, summit use trail, with ducks, headed for the rockpile that forms the highpoint. Topping out at 10:22 a.m., my total ascent time would be, then, 2:37. Not bad for almost 3,000' gain with a heavier daypack!

There was still snow left on the higher peaks, and in the cirque below. The sky was clear. I had seen no one. I hoped to meet some other hikers to invite them to my website and spur peak climbing, in the old Club style, but ran into others only on my way down. 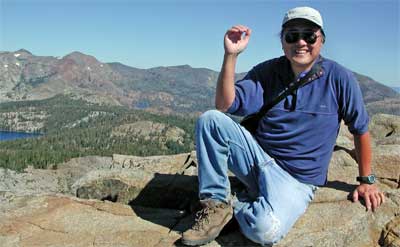 I snapped the usual summit photos, with nothing outstanding. Doing Ralston three times this year set my new record for repeats on the same peak in a single year. I normally dislike doing the same climb, again and again, but my former colleague set a similar goal for himself, climbing nearby Pyramid Peak (9,983') every week. He'd summit that maybe 25 times a year. Keeps you in good shape.

Some cute little chipmunks provided entertainment, and then I began to have thoughts of also doing Freel Peak, this day. It now has a good trail to the top, and I need to check on that for my peaks guide. I had the time. But I'll have a busy Tuesday, so had better not overdo it, with the feet and dizziness, and other problems I have.

I left the top at 11 a.m., and ran into a solo backpacker. Then, two other hikers made for a short chat. I felt fine, now, and returned to the car at 1 p.m., almost exactly.

Lots of time, but I anticipated holiday weekend, return, traffic jams, so I headed home. Indeed, there was a slowdown, but it cleared up, and I didn't lose too much time.

The hike was 9 miles, with 3,000' gain. I shot 67 images with my main camera, and my other, back-up camera also worked fine. I used only about four or five gallons of gas, now down to 2.839 in town. I spent about 6 dollars for food and drink.

The weather was quite pleasant, and there were absolutely no bugs to bite me. I applied some sunscreen, since it has an expiration date, and should be used up. A few flowers were left, but no fall colors, yet. And, the whole trail was dry, although a bit dusty.