Waiting and waiting for a game peak partner, I spent the month of June trying to save money, and keep in shape. Then, the summer was slipping by. I hoped to go for a longer road trip to bag several peaks, but I am so lacking of comfortable amounts of cash. I wish for another fall road trip, too, and I can't have too many bills to pay from this summer. 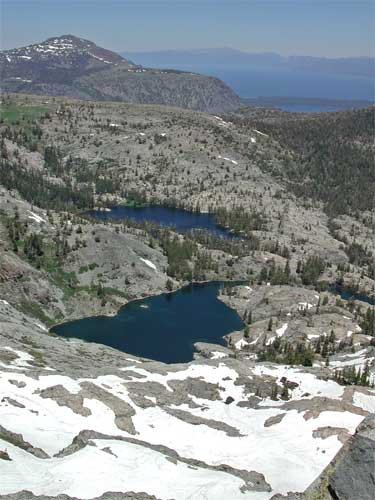 Finally, the holiday weekend made me resolve to do something. I remembered so many great peaks I had climbed on the Fourth of July, and even though I'd spend this Fourth in town, I could still do a local peak, Monday the 3rd.

I thought to check my main digital camera to fix this glitch I was having with it. I had to make the self-shutoff happen so it could be diagnosed and then repaired. Otherwise, my option is to buy a completely new set-up, with all new memory cards and batteries, my old ones being incompatible, and then, useless. I thought to give the camera a good test on another hike, so if it did start to work flawlessly again, I could still use it on a big road trip. Saves me hundreds, for now. I can delay upgrading my hardware till new, and hopefully, top rated, cameras arrive, maybe for Christmas.

Waking up early, I took off by about 7 a.m. to motor eastbound on U.S. 50. It was to be Ralston Peak, again. I hadn't been feeling real well, so an easier peak was in order. I wanted a shorter drive, too, as I am saving my car miles to be driven for a Washington State road trip.

Hearing on the news that a big rig had turned over near Echo Summit, I saw the highway signs flash with this information, too. I stopped for a quick breakfast in Placerville, CA, then continued up to the primitive trailhead near Camp Sacramento.

Other cars were parked there. I started my climb at 8:53 a.m., and slowly proceeded up the now dry trail. I saw that the snow on the south-facing slopes was mostly gone, so this would be no challenge, but I needed just plain uphill exercise and the test for my camera.

Refraining from many stops, I reached the high saddle in under two hours. I chose to take the trail over to the north, and from here, snow and water covered parts of the trail. Nothing insurmountable, but some hikers might wish to know. Only for a few sections, of several yards each, was water streaming down the eroded trail.

To the largely snow-covered summit ridge, I came upon two lost hikers. Another two peak climbers showed them their map, and directed them the way they wanted to go. They had wanted to hike the Pacific Crest Trail, a mile or so, away. I continued to the top, summiting, then, after two and three quarter hours.

Pleasant and clear today, I never tire of the vistas. I set my camera with different settings, still attempting to get several good photos, with the bright snow and sun. To think I'd learn by now! No glitch occurred at all on this hike, so now I feel safer, with my present gear, for my big summer road trip. Although if I could get a good deal, I'd still get a new digital camera. No big local heat wave is forecast for the next week, so I'll wait till it does get hot to leave, on a trip north.

Some other hikers were on top, and they shortly left after chatting a bit. One other came up. Then a couple who had been resting below came back up and left. Alone, I tried for a short nap, stretching out on perfectly flat rock slabs. Every so often, I'd get up and look for other hikers coming up. I'd snap a picture or two of my favorite view, toward Pyramid Peak.

I had intended to stay up here till about 4 p.m., but no light was changing, with not a single cloud, hardly, in the sky. I started down just past 2 p.m. I took the regular trail for more miles, instead of the cross-country shortcut straight down. Back to the main trail, I passed two more backpackers coming up.

I was out of condition, and went down slowly. I just had to be careful and not suffer a freak injury. It was nice, with a good mountain breeze, and I counted the times from specific locales. My estimate of my return time was right on the mark, and I came to my car by 4:10 p.m. To avoid the Valley heat, I'd dilly-dally about, and do some dining, maybe.

But, once I motored off on the highway, I knew I'd get home early and work on my website. I stopped for drink and snack, then used a pay phone to give a friendly call to an old time hike associate. None of the old peak climbing gang was doing anything.

Back home while loading my photos, the computer failed to read my memory card, at first. That was new. I tried again, then again. Dead. Then, it worked! With this electronic stuff, you don't give up on the first try. I might have been disgusted, and clicked to "initialize (erase)" my memory card. I knew not to do that, and my photos did download. Sometimes, it's just a bad connection.

Wearing mostly one light layer with shorts, I carried my heavy day pack, and drank most all of my two liters of water. I used sunblock, and never saw any mosquitoes. Wildflowers were appearing, and other flying bugs flitted about.

The Northern Sierra high country is opening up for good hikers, although snow will linger, in spots, through the month. While I'm now more game for a road trip, an easier regimen of peaks to climb sounds better. I still need to work on my weight and fitness. Usually a crash diet, started as soon as I hit the road, works well enough. Lots of sights, yet, to see!