I couldn't believe it! A holiday weekend, and I was stuck with no plans! Nobody called or e-mailed. I first chose to take off Saturday morning, to see thick clouds ahead, over the Sierra. I had gotten a late start, and had spent time at home looking for my ice axe. Not feeling right, I turned around and drove back home. Checking the weather on my computer, I saw that it was snowing in the high country! Not good! 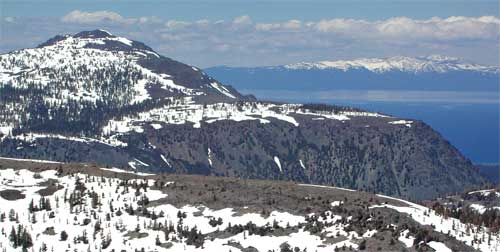 pending time on the bike trail and river walk, I relaxed this weekend. Time to play about with message boards. Then, the weather was to be better, on Monday, the holiday. Most all is closed, too, so there's not much to do. No one to talk to.

Leaving home Monday, then, at an earlier hour, I got breakfast in Placerville, CA, and headed east on U.S. 50. Most holiday traffic was now going home. When it was my time to return, the traffic would be much lighter.

There is no USFS Ranger Station, enroute, anymore, to speak with staff about permits or conditions. I was apprehensive, this being another season, and year, for the Sierra. I had little idea how much snow was really up there. I expected a lot.

Coming to Strawberry, CA, I noted the south slopes of Ralston Peak, ahead. Most of the time, this part of the season, they are mostly bare. About half the slope was snow-covered, so I wondered whether to do this or not. I could drive onto Lake Tahoe, and visit Reno. Some hikers would vote for that.

Only having so much cash left for the month, I decided to give it a try. Hiking is cheaper than motoring about. I parked at the primitive lot near Camp Sacramento, with a few cars already there. That was a good sign. There'd be hikers on the trail, then, and I wouldn't be alone.

Starting up at 10:45 a.m., there were plenty of blank, self-serve, wilderness permit tags to write one for myself. I was pleased to see the trail was basically clear of snow through the lower forest. That'd save me time. I ambled up, making good speed. After about twenty minutes, I came to a few snow patches. A dirty footpath led over them. There were a few fallen trees, then water on the trail. The snow was firm, or icy, even, and I was glad I had my ice axe. You could slip, then slide. A thin layer of slush or old powder lay over an icy base in spots. Potential danger. 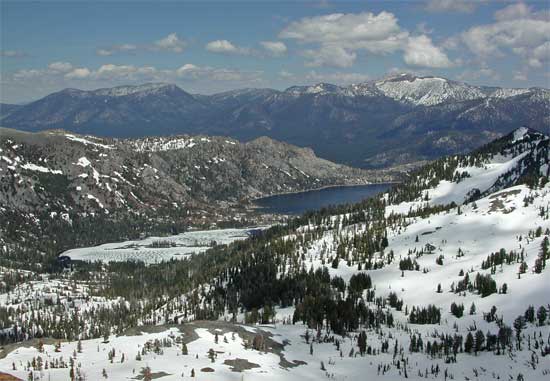 I followed the trail up, then the snow began to cover sections of it. I spoke for maybe twenty minutes with some backpackers, then continued up. Other hikers were way off the trail, and I directed them to it.

Setting my own route, I was going the way where I knew the trail ran. Soon, the snowpack was continuous, and solid. I kick-stepped up the firm snow, and then intersected the other main, snow footpath following the sharp ridge. Three other hikers appeared. Then, I saw it was going to be an easy day.

Coming to the saddle at 8,500 feet elevation, I went ahead and knew it was in the bag. I crested a hill, and saw the summit. Topping out at 1:48 p.m., three women were sitting on top, enjoying the vistas and nice weather. I shot a view of Mt. Tallac, and Mt. Rose in the distance (top photo), above Lake Tahoe. I had three light layers on, with one bottom layer under my jeans, but was fine with a nice breeze.

The views were stupendous, as usual. I snapped more photos, using different settings, and captured the snowy views. Some boarders, I heard, carried up their gear, to descend down the northern slopes. I saw some nice tracks S'ing down. I drank my water. Freel Peak looked awesome, with Echo Lakes in the foreground (second photo).

I strived for a good photo for my home page. I took several, then looked about for even more photos to take. Many hikers may find these pictures of some interest, planning their own coming hiking trips, here. The three other hikers finally came up, then I took their summit photo for them. 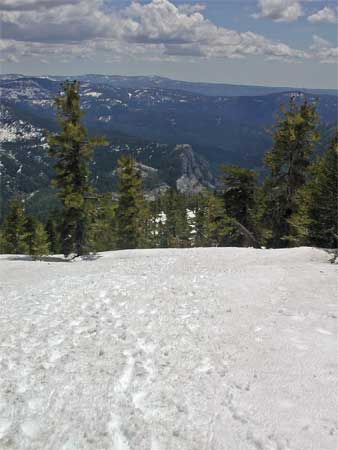 Heading down at 2:40 p.m., I hoped the icy snow had softened, and it would then be safer stepping down. Many footprints in the snow made for a nice snow trail. I kept the standing glissades to a minimum, and went slowly, at times, as not to risk injury. There are places to slip on steep, hard, snow, with undercut holes in the brush to fall into.

After about an hour, I was back on dry, or good, trail. It was now a snap. I took a few more photos of the trail, and soon was nearing the highway.

Returning to my car at 4:24 p.m., I had done it again! No one else was making any late start. I changed out of my wet boots and socks, then was shortly motoring home. A fast food and drink stop was pleasant.

Hiking 8 miles, with 2,800 feet of gain, I snapped some 140 images. Too many of them weren't very good, due to the bright sun on snow. I shoot loads of compositions, to pick just one or two good ones.

I carried gaitors, but never needed them. No postholing. I used the last of my sunblock. Drank only two liters of water. Spending six dollars for food and drink enroute, I used less than a half tank of gas. I didn't get sunburned, thanks to the small amount of lotion I applied, and with not even any scratch.

Nice to see that I can still do all this! Ralston is a good peak to start the season, being closer to home. If not for my Oregon peaks trip, I'd have so few peaks in my bag, this year, so far. Now, I hope for hikers to come forward to save some gas by carpooling, and have loads of peak climbing fun!