The time had come for my little peaks adventure for this summer. I did some research looking for easy peaks to solo climb or hike, and found I would do only three. I needed trails to the tops, worried about safety. I am not real familiar with the peaks of the Pacific Northwest, and have only been to Washington State once or twice.

Leaving town at 3:40 a.m., Saturday the 15th, after another night of no sleep, I took Interstate 5 north. I made a quick visit to the Mt. Shasta USFS Ranger Station, and then stopped in Medford, OR, for some walking about. I found out about the new library, where I spent some time. It was warm, and I feared for stuff in my parked car.

Figuring on camping somewhere, the Valley of the Rogue Oregon State Park, where I planned to do that, was full. Drowsiness began to overtake me. I pulled into a highway rest area, and noted there are generous time limits for a stay there. I slept in my driver's seat from about 9:40 p.m. to 2:15 a.m. No need for a sleeping bag.

Feeling a bit better, I motored on, getting more short winks at another couple rest areas, and passed through the Oregon towns I had walked about, last May. I was to see many a signed, "National Historic District" in many more towns along my way, on this trip. I came to Portland, OR, and strolled, again, about the Downtown area. I managed to walk out on a couple bridges, over the Willamette River, for a good view of the Portland skyline. Finally, I got the photos I had wanted!

Portland has a nice river walk along the Willamette. Being this was Sunday, hundreds of users were enjoying the perfect weather. Condos and lofts marked the riverfront, and the business districts weren't too far away. Portland was voted the greenest city in the U.S. of A., and it isn't hard to see why. Good, conscientious planning went into this city. 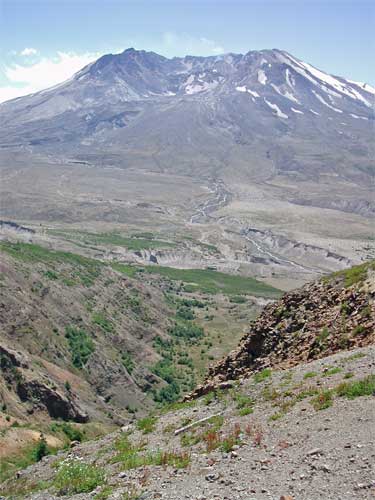 Motoring over to Tabor Park, with its distant view of downtown, I killed some time. Some users wished to chat a bit.

I checked into my motel early, and rested well. I had a quick bowl of soup as dinner in nearby historic Troutdale, OR. In the evening, I motored up to the Portland Womens Forum viewpoint for more photos of the Columbia River Gorge. The sun was setting, for another session of shooting good dusk light. I played with features on my camera which I usually don't use. It does improve the photo when you know, better, what settings to utilize!

The next morning, Monday, I had to get an oil change. That went quickly, then I was good to go for another 6,000 miles. I took Interstate 5 north to the turnoff for the Mt. St. Helens National Volcanic Monument, WA 504, from the west. Watching a digital movie at the main park visitor center, I motored east on the road to the Johnson Ridge Observatory, some 50 miles from the freeway. The volcano was steaming or smoking, and I shot many telephotos into the blown-out crater. A park trail leads up to a view from atop a small peak, as the sun shone brightly.

I stopped, on my return out, at Coldwater Lake, the Coldwater Visitor Center, and also at a view of a nice bridge, too, on the highway. Finally back to the Interstate, I headed north again. I made a stop in Olympia, WA, for a walk about the State Capitol grounds.

Then, it was to a motel in Tacoma. I toured the streets, and looked for a viewpoint of the Tacoma skyline. I found a Marine View Drive, and meandered about looking for a park with a vista. I had to sneak a quick stop at a restaurant parking lot to snap a few photos. Not very good with backlight. I visited the Downtown area, again, taking photos of the buildings. No peak to climb, today.