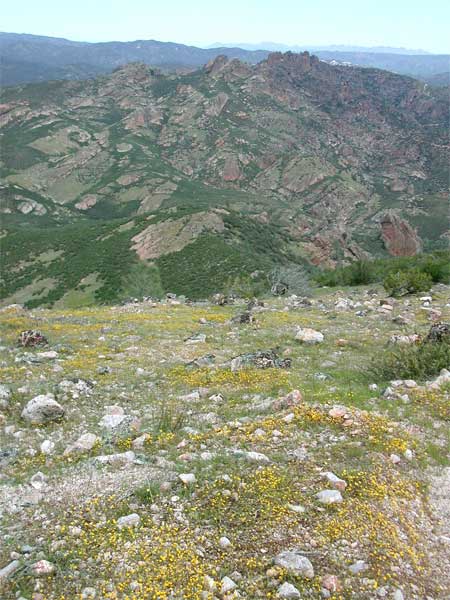 Finally now came forecasts of two straight days of good weather. I made quick plans, and left home by about 5 a.m., Tuesday. Heading south on Interstate 5, I kept awake with drinks and slight food, on my way out to Pinnacles National Monument. Taking CA 152 over Pacheco Pass, I turned south to Hollister, CA, where I stopped for more drink and rest.

Highway CA 25 shoots down to the park's east side, where a side road enters the Monument. Parking next to the Bear Gulch Visitor Center, I began my day's hike at 9:41 a.m. I would make a big loop, the most miles I have ever done in a day, here. Taking the Moses Spring trail, I passed through some caves to bypass the partial closure of one cave trail. Coming to the Bear Gulch Reservoir, I took the Chalone Peaks trail.

This trail climbs at a gradual rate to the top of this highest peak, North Chalone Peak, in the park. I was disappointed by the lack of a prolific wildflower bloom, and then, high clouds turned the sky white. I topped the peak in two hours, and didn't stay long. The summit photo ops were poor, and I was determined to do another trail, today.

On my hike down, a nice view of the main part of the pinnacles was enjoyed, with a small spread of goldfields (photo). I passed by a dropped ski pole, and noted a blue tarp covering what may be some camping equipment. Then, I ran into a few peak hikers.

Back to the reservoir, I took the High Peaks Trail. This is the best hiking in the Monument, and doesn't take too long. Several hikers were bound for the trail traverse at the summit of this loop. Spectacular rock formations presented themselves from along this trail, and I came to the main ridge. The view down to the west is gorgeous.

Resting a bit, I tended to my digital camera. Further along, a bird watcher pointed out a condor sitting on a rock. Wow! This may have been the first time I had ever seen one in the wild! I tried for a telephoto picture, but didn't want to get too close to this magnificent bird. They have a 12 foot wingspan, and are being brought back from near extinction by wildlife scientists. The best I could do was to have a larger dot in my photos, but it points out where the big bird was, at that time. I clambered on, climbing the rock stairs and using the handrails, along the precariously situated trail.

Then, as I was enjoying more vistas of such huge rock formations, I thought I saw the big bird soaring nearby, and snapped several pictures. This might have been a turkey vulture, but my zoomed-in photos could tell. It is always worth returning to these places of nature!

Soon, I came to the Condor Gulch Trail, which leads back to the main parking lot. I had snapped many more pictures of the rocks with diffuse light, with colorful lichens, and noted my time. Back to my car by 4:11 p.m., I had hiked maybe 12 miles, with 3,000' gain, total.

I made a trail report to the rangers. This morning, some important dignitaries had been here, dedicating a new addition to this Monument.

Shortly motoring off back north to Hollister, I snacked on some fast food. I pondered on what I would do. It was plenty early enough to simply drive back home, but now with gas near $3 a gallon, it might be best to get lodging. I had plans for more peak hiking tomorrow.

Motoring north to Gilroy, CA, I found a cheap enough motel, and rested up. I needed a good night's sleep. After more fast food for dinner, I watched the TV, and dozed off, late.

Hard to get up, Wednesday, I checked out by about 7 a.m., and got breakfast, then coffee, at a couple fast food restaurants.

My plan was to climb Mt. Wilson (2,651'), in a newly opened area for Henry W. Coe State Park. Taking Leavesley Road east from U.S. 101, this side road leads to a signed auto tour, which, in about nine miles from the freeway, eventually comes to Hunting Hollow, the new trailhead. There is a $4 self-pay, day use fee, and I saw the start of the trail was quite muddy. Then, a 20 foot wide creek had to be crossed, with no bridge or rocks to hop on. I have my doubts each time that I start to do this, but that made my mind up. I'd relax today, with an easy drive to another mountain park, and Santa Cruz, CA.

Motoring back west on CA 152, I checked out Mt. Madonna County Park. I paid the $5 day use fee by a machine, and drove into the park. There is no distinct peak or highpoint, and the county park mostly seems to be a few campgrounds amidst redwood groves. I drove about, seeing the place, then determining that there is no clear point to bag, headed on.

Passing through Freedom, CA, I came to Highway 1, and shortly, Santa Cruz. Taking Ocean Street, I stopped at a visitor center. I was given a map, and told what there was to do and see.

First, I used a free parking garage in downtown Santa Cruz. I walked along the main street, Pacific Avenue, snapping photos of everything there is to see. Lots of businesses. Two historic movie theaters made for some interest.

Then, driving west to the Boardwalk, I fed a parking meter, and walked along the ocean front. The famous Cocoanut Grove building is located here.

Further, roller coaster rides and other attractions provided subjects for photos. I walked out on the pier, and captured a panorama, with Fremont Peak (3,171') in the background (photo). I tried for more photos, then went back to my car. A nice shoreline drive made for more stops and photos. Surfers were using the waves, here, by the dozens. That looked like fun to do, with smaller sized waves to ride.

There is a surfer museum, and a seacoast natural bridge. Finished with my sightseeing, I headed back into town, for more refreshment and rest, then motored northeast on CA 17. Wondering if I should try Mission Peak for more exercise, it began to get warm. I had to turn on my air, and so, figured to get home earlier.

Getting to I-680, I meandered about downtown Walnut Creek and Concord, CA, looking for gas, then found some, at 2.959. Back up to Interstate 80, I completed my loop, with only, then, the one peak.

I walked or hiked some 14 miles, with the roughly 3,000' gain at the park, and shot almost 600 images. Spending about $100, with gas and the motel taking most, I brought back only some free brochures.

Using a few, light, top layers for clothing, I had on some light weight bottoms under my jeans. I would have worn shorts and T-shirt, if I had a place to change, later in the day, both days. Cool at the coast, I wasn't bothered by any bugs, and all my gear held up well.

Despite a recent, newspaper story about muddy trails all over the Bay Area, there was no such problem at Pinnacles. They do great work building and maintaining trails in a national monument. The sand or rock, used, drains and dries very quickly. The waterfall at the reservoir dam flowed nicely, and only a few, very small creeks had to be stepped over.

I may have to come back in the fall, perhaps, for Wilson Peak. It looks like a nice, easy, bump to hike. Also, I might have returned through San Francisco, but for the Highway 1, Devils Slide closure. Another mudslide had closed the scenic highway, and no quick repairs can be made.

Looking forward to doing a few local hikes, too, another road trip is contingent on a few, straight, forecast, days of sunshine. Hoping for Oregon, I will wait for my next, big, peaks adventure.