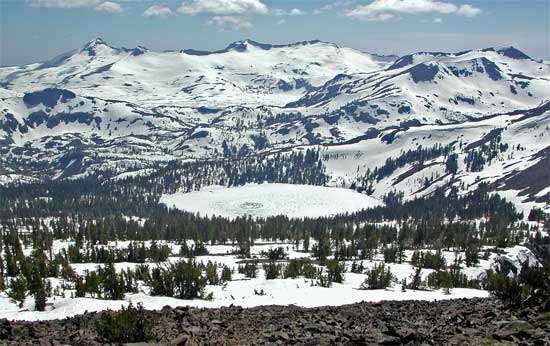 Gaining another new peak partner by e-mail, I was anxious to get back into the snow. We met at a local eatery Friday night, and had a nice veggie meal to get to know each other.

We set the time, at a decadent 8:30 a.m., and a place to meet Saturday morning, eastward along U.S. 50. I found, again, that not all people think the way I do, and to bear with the apparent novice traveler and mountaineer, as all aspiring hikers have to make a start at this, sometime!

Patiently making a number of extra stops, I motored us nicely to the Mt. Tallac Trailhead off CA 89, north of South Lake Tahoe, CA. The former gravel parking lot was now all paved, and I liked the absence of dust. It's been three years for me.

I had some doubts, figuring more snow would have melted since my climb of Ralston Peak, but my new companion stated to have been accepted for a climb of Mt. Hood in Oregon. He wanted some practice with an ice ax, so I set a route to do that.

There were plenty of blank forms to fill out our wilderness permit, and we started up the trail at 11:09 a.m. Due to the icier snowpack this season, I wanted the softer snow of the afternoon to help avoid any injury or hazard.

Me carrying my heavy pack, my main digital camera began to act up. I am looking for a new one before this summer, but I am wanting of cash for all new memory cards and batteries. The cost of living is rising, with rent, gas, and groceries giving me a financial hit. Being with a faster hiker, now, I refrained from as many photos as I'd shoot, normally, to not delay us, with our late start. 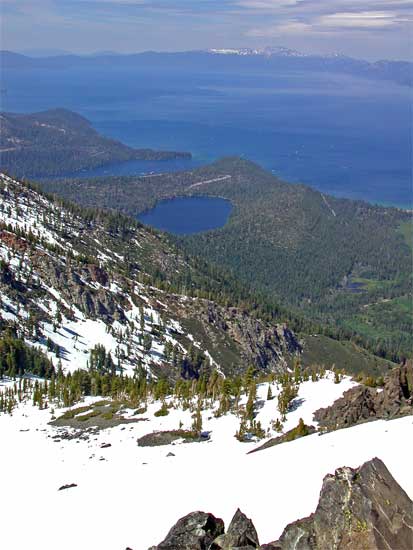 Hikers were already descending. We passed Cathedral Lake, and the climb on snow began. I followed the trail as best that I could, and soon we reached the snow bowl where the trail switchbacks up the rubble in the summer. I picked a safer, nice, direct route, using some exposed rocks, and gave us only about a hundred foot section of 40 degree snow. Someone ahead of us had left duck step footprints, which I used nicely.

One downward bound hiker performed a speedy sit glissade, with only ski poles. Some daring, there. His companion wasn't so game for that, and hesitated. I offered to help with our route and a loan of an ice ax, not wishing to witness another disaster. Too many of my Club associates have been badly hurt, or killed, on snow, in recent years.

I pleaded for safety, with all the gear we had, but she countered with claims to experience. We had to do the peak, so after a half hour of this, we went on up. I had to worry about my own companion, who needed practice for self-arrest. I presume she made it down O.K. Other hikers had taken a talus route, traversing well to the right (north) and back. This mostly avoids crossing the steep snow. We finished our short snow climb, and sought to follow the trail to the top. Following footprints on snowfields, this went quickly, surprising me greatly.

Soon, the top was in sight. We summited at 3:14 p.m., with a few other hikers on top. A couple dozen had topped out today. I began my routine of capturing the vistas. The Lake view wasn't very clear, with haze. My software would clear that up, but I don't like to overdo this.

It was pleasant enough out of the mild wind, and we were visited by a chipmunk and marmot. It was a very nice summit stay. Changing settings on my camera, I really will have to get a new Nikon. Gad! About $350 to spend, total, for another 5 (?) years of digital fun!

We snapped each others' photos, and a soloist and a couple continued to come up. I figured to leave the top at 4 p.m., and we did that by 2 minutes past.

Losing the trail in the rocks and under the snow, I ventured too far to the right, then left, corrected by my nicely cognizant partner. I was distracted about the steep snow downclimb. We reached the steeper descent area at about 4:50 p.m., hopefully when the snow would be softest. A terrible slip and slide was still possible. Assuming I was climbing with a beginner, I chose a slope with safer run-out. You could plunge step nicely, but it takes only one patch of icy snow to cause a slip. You might survive the slide, but injure yourself with your own ice ax. I take safety very seriously.

Carefully coming to some lower, and less steep, slopes, I suggested my partner try a sit glissade and then stop or slow himself. The basics, first. I made some suggestions, then he began to get the hang of it. A tele skier showed us how to head down with style, almost.

Hiking down out of the snow, we came back to the trail, which was flush with water, at points. I took a rest, drinking water, and glad we had done the peak. From Cathedral Lake, it is only about an hour and a half to get back to the trailhead. We crossed some small streams, and I used small logs, although my boots were soaked from the wet snow. My feet were comfortable enough, with three pairs of socks. 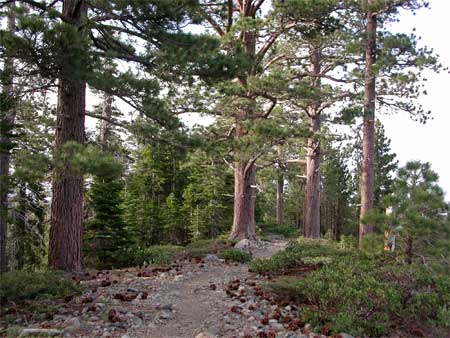 We slowed and chatted, with plenty of daylight. I did more photography, and he chatted more with family on his cell phone. We returned to the parking lot at about 7 p.m.

Changing out of our damp footwear, we were shortly off to enjoy a pleasant drive home. Little traffic. I stopped for a burger, and he had chicken sandwiches. We shook hands as I dropped him off, and hope for some better karma for another peak climb.

We'd done 10 miles, with 3,300' gain. I shot 143 images, some of which need work due to the snow. The photography had gotten better in the evening, though, with high clouds, and diffuse light in the forest.

I had assumed the weather forecast, which said no thundershowers this day, would be correct. They were right, but otherwise, I'd have made an earlier start.

I used half a tank of gas, about 5-6 gallons, purchased the day before at 3.139. Spending about $7 in cash for food and drink, I stayed frugal. I wore two light top layers, and one light layer under my shorts. No gaitors, again, and my brim cap with flaps did well.

The mosquitoes are appearing, and getting more aggressive. Repellant worked where I applied it. Receiving several bites through my lightweight underwear on my otherwise unprotected legs, those didn't bother me much. Although I didn't feel real well for a week or two, after. I used sunscreen with good effect.

A few wildflowers are out, with a few snowplants, still. There's still plenty of snow in the Desolation Wilderness. It remains to be seen how much melts to July. I'm glad I can use my skills and gear to enjoy the peaks anytime of the year, and that so many others have taken this up, too.