Eager to do a hike today, the forecast indicated one should not make any great plans. I ambled about Downtown, and the sun constantly held its own against the clouds. Too good of a day to stay home, I motored off, in late morning, to head eastbound on Interstate 80. With some leisurely business in Roseville, and then Auburn, I figured I'd see the snow.

The sun kept shining brightly, so by impulse, I took the Highway 49 Exit and drove the curving road down into the American River Canyon. I'd do some checks of the trails that I might do later, when they dry out.

Parking by the American River confluence, of the North Fork and Middle Fork, I got out of my car and began to evaluate the photography. The sun brought out the color, and clouds added some light diffusion. I walked over the bridge along the Old Foresthill Road, and looked at the Confluence Trail headed east along the Middle Fork. 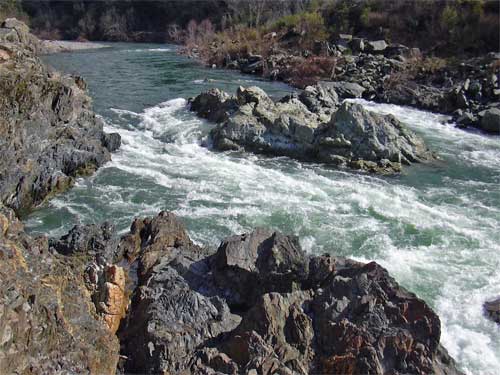 About a couple hundred yards along, there is a nice view of the rapids. Rocks and white water made for many photos, and the sun reflected off the foaming cascades. I did a few movie clips, and shot more pictures, to get one good one. The trail to here was dry enough, with a few puddles to hop around, elsewhere. I spent several minutes here, clambering about on the solid rocks. It was glorious!

Back to the highway, I hiked a short bit up the Lake Clementine Trail. About seven minutes along, some gravel had slid across the trail. A torrent of water must have brought this down, and I declined to go further. The trail was awash in water, and muddy-looking. I saw no flowers, as I might have in another year.

Snapping a few more photos, I headed back. Two runners with their dog sped by. They were the only users to see on the trails, during the hour, or less, that I was here.

Taking a short trail down to the river, I viewed the rushing waters at close length. The aquamarine colors always inspire me to art. A few other people here were enjoying the sun, and the sights.

Motoring back up to Auburn, I then took Lincoln Way to get onto the Interstate. I would see how much snow they had gotten in Colfax.

There was a slight amount left along the roadbanks. Most had melted. Another time, there had been feet of snow. Disappointed, I went to the BLM Stevens Trail parking, to see no cars. The trail was very muddy, and water coursed down it, in slight amounts. No great deal to hike, today.

Motoring back home, I was glad to have escaped the city, and enjoyed the outdoors, however briefly. The sun dispels any depression, and I always feel good after seeing the Sierra. The bright blue skies, with the puffy white clouds, were a contrast to what I figured the weather would do. The air was clear, so the distant highrises were visible from along the Interstate.

Probably not hiking more than half a mile, I shot 57 images and movie clips, and spent only for a burger and drink when I got back to town. I had worn one thick layer over two more, and bottoms under my pants. It had broken a record for the low, today, so I used my fine outdoor wear.