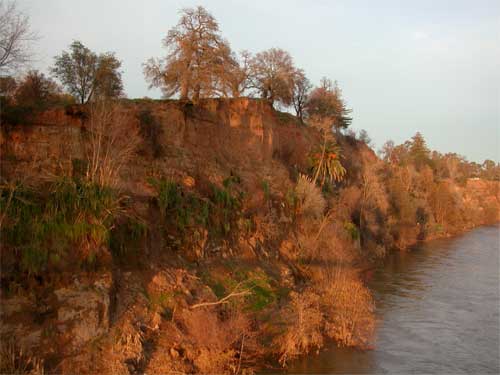 Moving things about at my new place, I opted to do a photo shoot, today. Gas prices are on the rise, again, so I kept down the traveling, and sought to enjoy the vision of having your hometown being an exciting, vibrant, place, to live.

Spending the morning doing the usual things, I left home in early afternoon to head out on Interstate 80. I wanted to get some material for reading, unavailable at the main city library. The Placer County library in Roseville, CA, has been good for that. No jams, yet, I got there in good time.

Most of the construction work about the Douglas Boulevard Exit has been completed. The western on-ramp directly to Sacramento is not yet open, so you have to plan ahead for a detour.

Lots of relevant (for me) news, this day. Nikon announced its termination of manufacturing for most of its film SLR cameras, to put fuller efforts into developing and making digital cameras. And then, there was the Apple Computer news, with especially fast, new products. Saturn unveiled a hybrid SUV, which doesn't cost too much more, and gets 32 mpg, highway. Things to get, or dream about, for my distant future.

For now, though, I paid a visit to the camera dealer, and found some good, current, lines to look at. Too many expenses, now, to consider an updated, new, digital camera, without a special deal.

Motoring south on Sunrise Boulevard, where I haven't been for awhile, with new things to see, I came to Fair Oaks, CA, and Bridge Street. It was nearing sunset. I checked the oak over the river, and it appeared pretty stable. The ground was drying, and all footing was better. Nice late afternoon light for many photos. Gulls were flying high, headed east, and someone reported a great blue heron, somewhere. 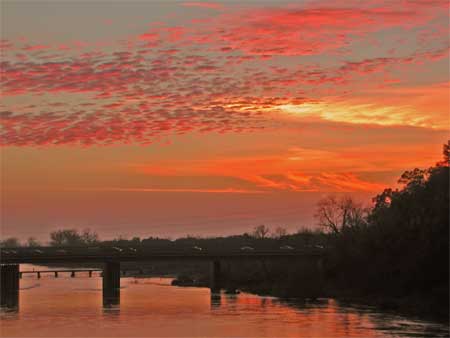 With some clouds to the west, I waited to get a nice sunset photo. The Sunrise Boulevard Bridge was filled with stop and go traffic. The sun disappeared behind some low clouds, and the prospects of a great sunset loomed. It turned out to be only fair, but I shot many a photo, anyway, depleting another battery for long term storage. Later, I had some fun editing the image, and brought it up to a quality, that, never in the world could you have so easily done, with a film camera and slides!

Caught in a slowdown and traffic jam headed back into town, I stopped to get a quick meal at the local natural food buffet. Lines delayed my self-reward for the day. I then did some grocery shopping, and got a 99 cent burger at a fast food place along a main street.

Having some 200 photos to download, I saw I wouldn't have time to post, this evening. Getting up early every morning means I fall asleep, earlier.

I drove maybe 50 miles, and walked only a few hundred yards, with maybe 70 feet of gain. I spent only for food. I was a bit cold in my two, light, top layers and parka, with no insulated bottoms, just pants, waiting on the bridge.