Well, a repeat net contact saw I was back from Utah, so sent me an e-mail. He now has a website for peaks, among other things, and I am so pleased with that! I tentatively agreed to an easy climb of English Mountain, which I needed for my Ogul List 4X completion. I wasn't sure how I'd feel early Sunday morning, as we only had decided to do this at about 9 p.m., Saturday night. I had things to do, but this peak isn't one I'd like to do solo, and partners are rare for me, to come forward. 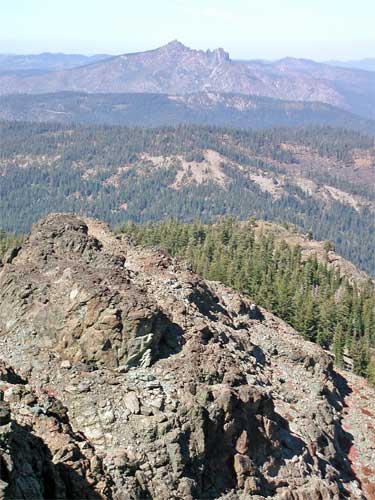 I sent an e-mail at about 6 a.m., as my alarm went off, as I felt good enough to do this. I told him I'd e-mail, then, to let him know I'd be going. It's an easy enough peak, but a longer drive.

We met at 7:30 a.m. at a local fast food restaurant, and I drove us up Interstate 80 eastbound. Scoring on gas at 2.379, that made my day! Traffic flowed smoothly, but I began to have doubts about doing this. I had been rushed, which I don't like, since haste makes waste. I failed to make a copy of my peaks guide description to check on, and remind me of the way to go.

Chastising my partner as I drove, I had hoped to do the peak fast enough to make a short side trip to Reno. But then the topics changed, and we came to Truckee, CA. I missed the CA 89 north exit, but went back to take it. I measured the road miles for my peaks guide as a recheck. It's been since 1995 since I did this peak, last, for my then Ogul 3X list completion.

Most everything was the same, and I took more mileages. We passed Jackson Meadow Reservoir, and saw the peak. Then, the road turned to dirt, and I greatly slowed. Signs were missing, and we had to look at the map. Beginning to get lost, I had to go on memory. My description would have helped, but I had figured navigation would be easy. I took a left fork, and the dirt road descended. Inching along, the road got rougher. My partner stepped out to move some rocks.

Going by my 11 year old memory, I did get us to the right road and the way to the French Creek roadhead. No facilities or anything mark my route to the peak--it just seems logical, by the map, to start there. I wanted to check on an old, faint, use trail, since it facilitates navigation.

I chose to park about a half mile shy of our cross-country start, and was that a good call! The road got rockier, and my car may have suffered some damage. We started out at 11:09 a.m., and walked south up the dirt road. In 20 minutes, we came to the wide logged clearing, where French Creek intersects the road.

Scrambling up over short, class 3 cliffs, I sought to find the best way. About 300 feet into the climb, things began to look familiar. We started to follow an animal trail, and was I so slow! Heavy pack, again. I had to admonish my partner not to go too far ahead. Then, the slope ahead started to clear of the rocks and brush, and I discerned where we had to go. There is a lake or pond that is not shown on my old 1955 15' topo. We came to it exactly, and I knew then we would bag the peak. All familiar territory!

We climbed up forested slopes, with him going slightly ahead and headed the "wrong" way, at times. He is just too fast! Clambering up some rocks next to a dry streambed, we came to a slight saddle to the south of Echo Lake. Just a matter of time, now.

He led upwards, with steeper and gravely talus and scree, and I pointed where to go. I had to rest, then gained heart, knowing we were close to the top of the main ridge. We rested where he gained the ridge, and it was a matter of precision route finding, now.

Traversing around to the west side of the summit rocky ridge, I sought to get us on the class 2 talus scramble that goes directly to the top. That went fine, then I heard voices. Three other guys were climbing up, one with a rifle. Hunters, I guess. We topped out at about 1:30 p.m., and I marveled at my luck and skill. An easy 2:20 to the top! 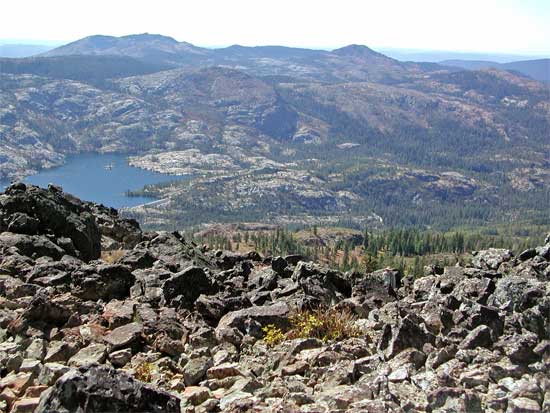 There's now a solar powered facility on top, and we five gleefully signed in the register. The view was a bit hazy, but my software works on that. I snapped picture after picture, to make sure I didn't miss getting a good one.

The top summit photo is of Sierra Buttes to the north. The lower one is looking south to Signal Peak (left) and Old Man Mountain (right). That's French Lake, too.

It was breezy, and I began to sniffle, putting on a second layer. We liked being here, and when 2 p.m. rolled around, we decided to stay longer. No way to make it to Reno before my store closed.

We rested and talked, and enjoyed the view. It began to be mid afternoon, and the sun glimmered on distant lakes. I continued to shoot plenty of photos, then we chose to start down. We left by 2:40 p.m., figuring two hours back.

I slowed, being careful not to fall off balance on the talus. Don't want an ordeal! He went ahead, searching for the best route. Soon, we were down off the rocky part, and back to the lakes. The scale here is not so much, with the climb being only about 2,000 feet, total.

We found the faint use trail, and it gave us easy hiking down, with good time. We thrashed through some brush, but found the class 1 way down. Back to the dirt road by 4:10 p.m., it was only 20 minutes back to the car.

So we had done it. He had needed this peak, too, also working on the Ogul list, so this was a good choice. We readied and shortly motored on out. I motored slowly, again, to spare my car, then we were back to pavement. A relief! I hadn't done much class 2 since awhile ago, with peak trails all summer and fall.

A quick stop in Truckee gave me food and drink, and I speedily motored west on I-80, to drop him off, and get home early enough.

We did some 3.5 miles with 2,100' gain, round trip. I shot some 125 images, and drove about 280 miles. Wearing jeans, I knew there is some brush to go through. I needed only one light layer over my T-shirt, on top, although if the wind had not calmed down, I would have put on a parka. Lots of flying bugs, in one area, but no mosquitoes, or ticks (of course, up here). We flushed out some grouse, and noticed no small (or big) ground animals.

The other party reported another high 4WD road to the north, giving them an ascent time of about an hour and a half. Something to check, someday. Too few ops to hike here, to check things out really fully! Our five hour plus round trip, including an hour on top, gave us the exercise, and some scrambling. I had feared for injury or loss, but I lucked out, again. Better for climbers to be young, though!