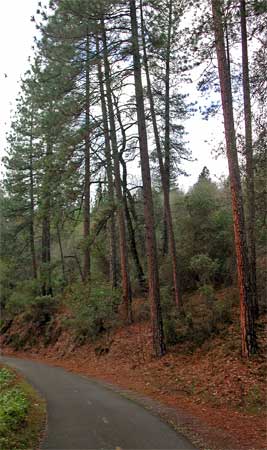 Settling in well from my move, I was game to enjoy an activity during this dry period after the heavy rains. My usual venue for winter hiking was inundated, in parts. And still with no partner, any distant locales for fun were out.

Leaving town in late morning, I motored eastbound up U.S. 50. Again, I am awed at the continuing new development about Folsom and El Dorado Hills, CA. Subdivisions are popping up like mushrooms!

The hills are now green, and traffic was moderate. Shortly coming to Placerville, CA, I took the Broadway Exit to turn back west to gain the Mosquito Road. All was about the same at the start of the Eldorado Trail. The restrooms were open, and the parking is still free.

Many walkers, and a few cyclists, were enjoying the clouds and sun. A few people had dogs. I snapped away with the diffuse light, and noted new information on the trail signboard. The pavement was mostly fine, with pine needles and a bit of red mud spilling out on the trail.

Making good time, I soon came to the paved trail's end, a bit past the pedestrian bridge over the freeway. They haven't yet paved the section up to Camino, CA, although I seem to detect some new gravel. Turning around, I encountered a couple, with two goats following. They said the goats had followed them from somewhere. I hear if you feed a goat, it will follow you forever.

I got them to follow me, and asked other walkers for a cell phone. Animal control can take care of them, before they stray onto a roadway and become roadkill. One hiking pair had a cell phone, so I left it to them as what to do.

Most leaves were gone, with only a few sumac leaves for any color. The clouds let the sunlight through at times. Perhaps I had seen some 30 users, today. Back to my car by 1:47 p.m., having hiked some two hours, I shortly left for the library, here. Spending an hour there, I then headed back into town. 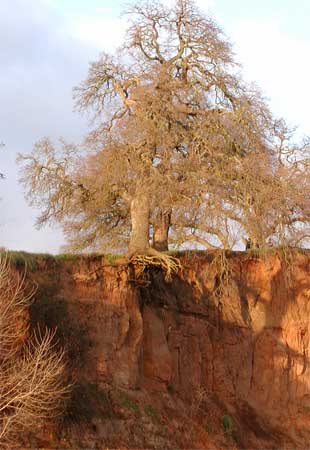 Wishing to check out Fair Oaks Bluffs, I exited on Sunrise and headed north. Over the swollen American River, I parked along Bridge Street and noted the new sign. It was nice. The overhanging oak had yet to fall over, and I snapped many photos. It begins to seem to defy the laws of physics! The bluffs have eroded away a bit more, and it continues to be a bit dangerous. Signs pointed out the hazard.

Many people were checking the scene, here. This starts to be a place to gather, and take in the ambience of nature. People were enjoying the view down to the river, which was muddy and high. Apparently a beer or two were being enjoyed, here. There's no big litter problem, yet, with trash cans placed about. The dirt is damp and muddy in spots, and you can slip. I tread on sandier spots and kept my boots cleaner, that way.

Down to cross the old bridge, I went to the old boat ramp, and saw most of the concrete had been washed away. The setting sun cast good orange light onto the bluffs, and I snapped a panorama sequence, again. When that tree falls over, I think it will be a small media event!

I was home soon, and washed up. I had hiked some 6.5 miles with the slight gain on the bike trail, about 300-400 feet. I snapped 136 images, and spent about $3 for a burger and drink. I fear my car doesn't get real good fuel efficiency, now, in the morning chill, and perhaps due to a slight, bumped tire, misalignment. I'm being hit by higher bills and more expenses. Have to stay closer to home, to be more frugal!