Getting the company of a repeat hiker, we carpooled out past Davis, CA, to get to the primitive trailhead for the Cold Canyon Loop. The weather was clear and sunny. We took our packs out of the car, and started our loop hike by 11 a.m.

Cautioning my buddy about crossing the highway, with a blind curve and a downhill section (where cars go fast), we made it to the upper trail, fair enough. I signed in the trail register, and we began hiking up the hill. We both had light packs, as I have little or no great need for conditioning, with no hard peaks ahead, for me.

Making a short side trip to a view of the dam, far below, we had to scramble over some rocks, and be careful. There are some cliffs below, and you have to watch out for slipping. A sprig of poison oak had to be passed, too. Three other hikers were enjoying the view, but they left as we continued on a bit. Snapping photos, then returning to the regular trail, I was glad we had done this short side trail, safely enough. My companion had slipped, getting cuts, on the last hike.

Gaining the bump 1,475', we rested to enjoy the views. Some close-by bumps to the north had snow on them. The Coast Range received some of the white stuff a few days ago. The snowy Northern Sierra was visible, and Sacramento could be seen well enough. My friend had a pair of binoculars, and reported good detail on the city skyline. I shot a few telephotos (top photo, town on the right) and also noted some fresh mudslides (photo, below right) on the side of Pleasants Ridge. 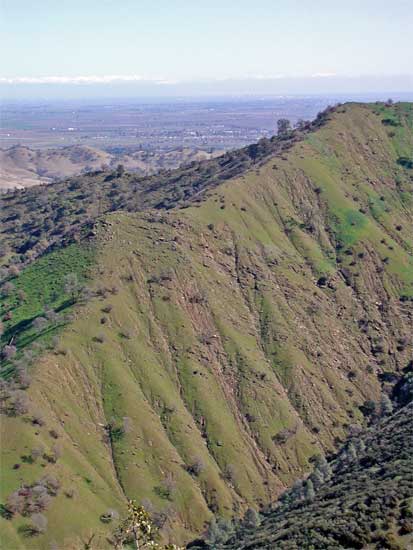 Hiking on, we saw some paintbrush, warriors, and shooting stars. Tiny blue and white flowers were also seen. This being a preserve, it is great for viewing native wildflowers.

Descending from the high peak, 1,535', we spotted some mushrooms, ferns, and mosses. I counted five species of mushrooms. Many of them were dead, but there were some fresh ones (never eat these--they're probably all poisonous).

Other hikers appeared, and we spoke with them. Some wanted to know which was the best way back to the cars. We advised them of the great view from the main ridge, and they all continued on up.

Finally down to the main trail, we headed upstream a few yards to see the Homestead. These are now mossy, rock walls, left from someone's home, way back when.

Headed out, more hikers came by. We moved off the trail to allow them to pass, as there were more of them than us two.

From the Homestead, it is only about 40 minutes back to the cars. We hopped across the main creek, easily. I had been worried about that, since posted signs warned, "high water." I pointed out the steep trail up Pleasants Ridge, then we passed through the gate. We were back to the cars at 2:32 p.m.

About double the number of parked cars were now here, since our start. We motored off quickly, and stopped in Winters, CA, to check a restaurant. They were closed, otherwise we may have had a great taco (by my companion). We purchased drinks at the sandwich shop, then motored on home.

I had worn three, light, top layers, pants, and my cap. It was warm going up the hill. I am always impressed by the nature on this hike, and never tire (yet) of the vistas. My old, shell parka helps protect from the overgrown branches, and we had no scratches. Perhaps someone had clipped the trail since my last time here, a couple months ago.

I saw no ticks or other bugs. There were lizards, and a few turkey vultures. Lake Berryessa offered itself as a great view, as usual.