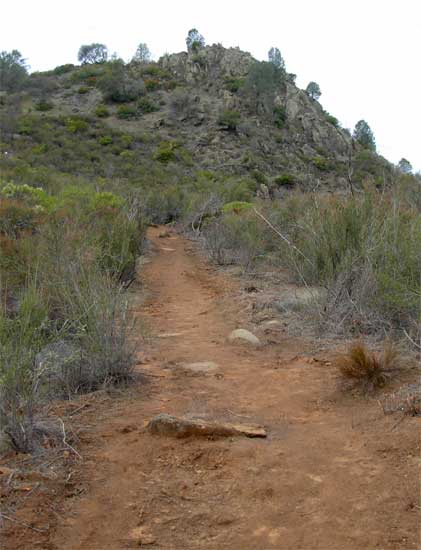 Figuring I had better get off my duff and get back to the mountains, I refrained today from any more of my about town walks, and decided to head for some nearby wilderness. I had made a record (for me) 109, standard, six mile, city and Parkway walks this year, sparing the air totally, with then not one drop of gasoline burned, thusly. I start hiking from home. This doesn't count lesser walks, which I do daily, or my numerous, other, longer, bike trail walks, most serviced by light rail, this year.

But as they say, reconnection with nature is good, and that, for me, overrides such a fairly negligible amount of fuel used, at my usual 41 mpg, to do this.

Anyway, I recall one of my former peak partners doing his presumed, 100 gallon a weekend, drives, with even more greenhouse gases deliberately pumped into the atmosphere, whenever he says that he hears of my paltry conservation attempts! That may be about a ton of emissions spewed out each time he does that, depending on how you count CO-2. Another staunch, local enviro club supporter, or, the SUV, as one may see it!

I left home later in the morning, and came to the parking area with only 6 cars, there. I started my hike at 10:40 a.m., happily having used a gas station restroom enroute, and gaining more soda drink, at about the same time. A quick check of the town of Winters had shown no fancy eateries open, or anything that appealing. I had then wished to have a relaxing breakfast, but, I am always dieting.

Looking at the start of the upper trail, I spied a sign stating "4.5" miles. Was my estimate of four miles for this loop that far off? But then, I saw detour signs. They are now building a more gently graded trail, with switchbacks. Cut brush fills up the old, steep, rocky trail. I started snapping my photo record of this. I followed this new trail past a few switchbacks, with a group ahead of me. It crosses the old trail a couple times, and then, the new, broad, dirt trail peters out to a narrow footpath. This is a work in progress. I took this faint footpath gingerly back to the original route, and shortly reached the top of the ridge.

About a dozen hikers rested there, and we spoke for awhile. They ambled over a few feet to a view of Lake Berryessa, and I continued on. It had taken me an hour to top out on Bump 1,475', so I must be slow. Carrying a light pack, I drank up a liter of water. Snapping pictures, the light was dismal, and the mainly white sky offered no drama. I snapped several auto-timer photos. The other hikers had passed by, and after twenty minutes or so, I followed them along the ridge trail. 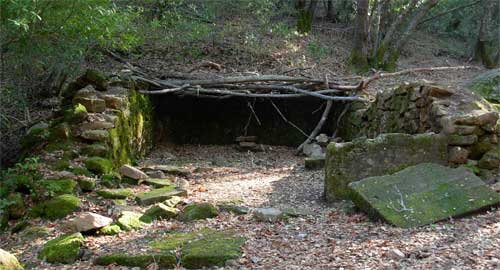 Passing even more hikers, I quickly topped Bump 1,580+, then sauntered down the trail. There were only a few mushrooms, the colorful, banded ones that I call, "Rings of Saturn." Really bounding down the wooden steps, I caught the larger group at the trail junction down by the Homestead, then went over there to snap a few more photos.

From here, I knew it takes me only some 30-40 minutes to get back to the cars, and had some things to do, today. The creek was barely running, and I snapped a photo to record the flow. More hikers were coming up, some lightly clad. I was back to the parking area by 1:30 p.m.

Drinking up the rest of my water, I quickly motored off, and came back into town without a stop.

I saw no ticks or mosquitoes, but many gnats. Some birds had been merrily chirping. The dirt trail was damp, but not very muddy at all. Wearing four layers all day, I did get a bit sweaty, but didn't need to strip off any layers once past the main gain. Gloves and hat were nice.

Having been saving up my cash for another road trip, I wonder if or when anyone will come forward to join me in a 41 mpg carpool for loads of peak climbing fun!