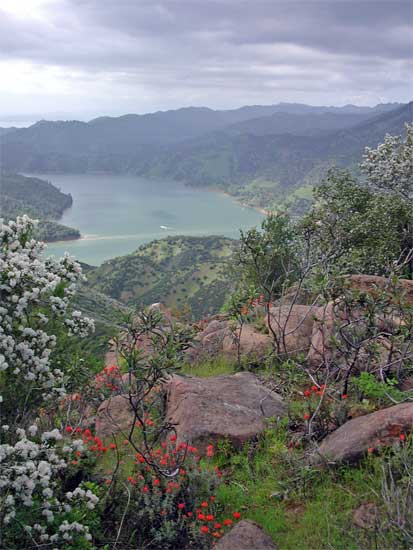 Doing a short riverwalk in the morning, that didn't satisfy me as far as my daily exercise. I mused over what I could do, this day. It would be my 13X as far as the Lake Natoma Loop, and I don't seek to do that so often. The heat of summer is coming, and I need to get some gain.

Leaving home in the mid-afternoon, I motored out on Interstate 80 westbound, and took CA 113 north, to Russell Boulevard. I entered under the realm of a cloud cell, and got some light rain. The sky looked better over the part of the Coast Range ahead, and I managed to stifle the thought of going back home.

My luck held, and I was shortly arriving at the primitive trailhead for the Stebbins/Cold Canyon Reserve. Starting out with cloudy views and spots of sun, at 3 p.m., I had no rainwear, and carried only my light pack. This would be a slight weather adventure, and it would test my gear for wet conditions, if it poured.

Taking the hill up to the bump 1,475', I made some good time. Hearing the roar of the creek below, I asked some hikers about the creek crossing in the canyon. They said it was allright. I had rested and drank water at the top of the bump, and shortly continued on the loop.

Darker clouds loomed to the north, offering dramatic light for the view of Lake Berryessa. I took several shots, and some flowers were out. This seems not to be a banner wildflower year.

Scrambling down, then up the trail, I passed over the high bump 1,580+, and began my short descent. I really bounded down the wooden steps, and reached the canyon floor in almost no time. I anticipated the three foot jump across the creek, and snapped a photo (right) as I came to it. It's a fun obstacle, only a problem for novices, or the timid.

Enjoying the canyon light, I looked for fast, rushing, water to shoot a movie clip, and saw many nice photos in the flora. So many chaparral species to see, here, only an hour's drive from the main metropolis! It was late in the day, so shadows covered the flowing creek. Not enough direct sunshine for a great movie clip. 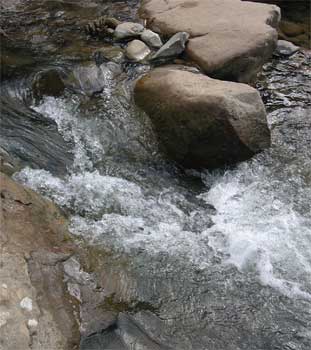 I thought of some fine dining when I got back to Winters, CA. That propelling me to the finish, my time was roughly 2.5 hours, round trip. No wasted time, here, today!

Just munching on a sandwich, I sought to stabilize my fuel gauge reading as I ate. Apparently, as I had parked on an incline, the low fuel light incorrectly flashed on. The light reappeared as I came closer back to town, for then, me to get cheaper gas, at 2.939, today.

My stats were the usual 4 miles and 1,500' gain. I shot over a hundred images, and spent only for gas, drink, and food--about $15. I needed to use only about a quarter tank for this short jaunt out of town.

It never rained on my hike, and the clouds dissipated as I sauntered along. The view to the cities of the Central Valley was good enough, but it was too hazy for the Sierra to be seen. I held my good fortune to not do more gain on Pleasants Ridge, but next fall, I'll use this op, for gain, a bit more.

Wearing only a vest over a light crew, my jeans weren't too warm. I wore my cap, as there is some sun. Perspiring as I climbed the trail to the first bump, I had stopped to replace a camera battery, and to snap some close-ups of the flowers.

Seeing no ticks or many other bugs, I saw a few lizards and some turkey vultures. One tiny snake slithered by as I made my way up the trail, and some other birds appeared here and there.

Maybe because of the late snow, a road is still closed to one of my Oregon peaks. So, I'll have to wait further till I can drive up to there. It is due to get warmer, and my prospects for a partner have been looking up. A carpool, or even a free ride, must sound enticing to some. Why so many refuse basic conservation, I am reluctant to speculate.