Gaining a new peak partner for this fine weekend, I chose to do a test hike to bag this prominent peak closer to home. We communicated by e-mails, then by phone, and arranged to meet along Interstate 80. I pulled into a fast food restaurant parking lot to have him come by, just after 8 a.m. 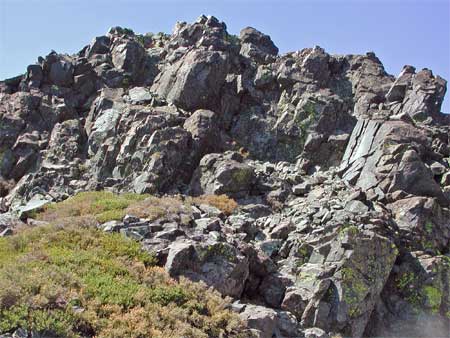 Motoring speedily into the Sierra, eastbound on Interstate 80, then, we spoke about our peak plans. I stopped at Nyack for food and drink, then it was to the CA 20 Exit to head for the Bowman Lake Road. No fall colors had started to appear, but this is a nice backcountry roadway. I kept track of my notes on this climb, and found they were still basically accurate.

Then, we came to the turnoff on the Grouse Ridge Road. I described it as "rough," but it seemed rockier and rougher than I recalled. I had done this the last time in 1995, so it's been awhile. I slowly motored up the dirt road, which is a major USFS byway, and had to stop to scout ahead on foot. I try to take care of my vehicle, and damage could easily be done.

The rocky road climbed upward, and I considered turning around. Just not worth any damage to my car! But, again, scouting ahead on foot showed it wasn't that bad. I have my ego in getting passenger cars safely up these worsened roads. I had alternate plans, but I have faith in the USFS. They say these main dirt forest roads are drivable, and good.

It took about an hour and a half, but I made it to the road's eastern end at the trailhead we wanted. I had driven ever so slowly!

So, after my partner disappeared as I got ready, we got re-connected and off at 11:13 a.m. The trail first descends, and we came to a side trail with no destination signs. I figured the signs had been taken down, so we turned right and followed this side trail for a few hundred yards. It appeared to lead southward to a lake that I didn't remember. I thought I had dropped my map, then chose to go back up to get it. My faint memory of the right bearing and trail then convinced me not to go this way. A short way along, back on the correct trail, we came to the broken sign. I will have to make slight changes to my peaks guide. 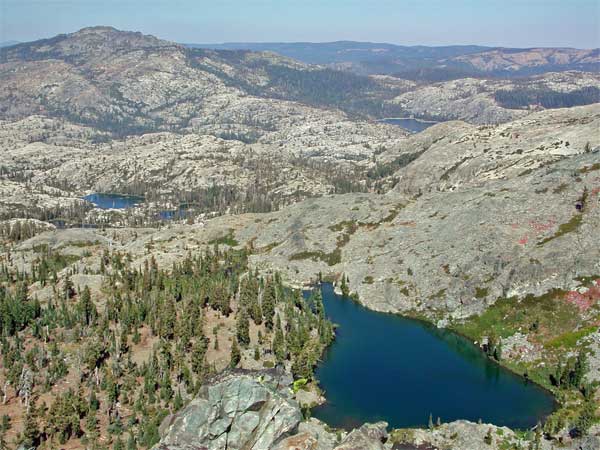 Essentially, we then followed the signs to Glacier Lake. Three trail junctions may confuse people, without the signs. They all had been changed since my last time here.

The trail headed the right way, now, and I pointed out that despite my long past experience doing this peak, this way, I could still get disoriented. I recalled someone else had gotten lost and never made the peak. Local Club chapter.

Shortly, after another hour of hiking, we were coming to Glacier Lake. There were still some snowfields on the peak above, and we headed over talus to the correct gully up to the buttes ridge. It was steep and loose, but I kept going. My partner made good time up, ahead of me. A 34 year age difference.

We topped at the saddle atop the ridge, and it was only about sixty vertical feet more to the highpoint. The class 3 routes are seen from the saddle, here (top photo). I wanted my companion to wait as I recalled the easy class 3 route, as there are easy and harder ways to go. The moves aren't exposed, but you can still slip and get hurt. He easily clambered up, and I had my usual difficulty figuring the best moves.

Topping out, then, at 1:43 p.m. it had taken only then 2:30 to summit, even with our route finding delays. We snapped pictures of the views, a bit hazy to the south, maybe, due to a local forest fire. Glacier Lake lies below, with English Mountain (8,373') to the north (on the left, middle photo). I had another climb to do tomorrow, so didn't waste time. I drank more water and rested, and had brought up cans and a book. I had many times placed a register, over the decades I had done this peak, but few were to last. We had found nothing.

After pictures of each other, we started down at 2:15 p.m. I had worries about slight injury on the steep, loose, scree, but it was bad for only some 100 vertical feet.

Then we were down to the talus, and sauntered over to the shore of Glacier Lake for more photos. Some other hiker had seen us, so climbed the peak, too, missing us going down. I snapped telephotos as he stood on top, and a companion asked to have photos e-mailed. I gave her my website name to search for, to contact me.

Then we started back on a likely trail. My companion failed to remember some of the lakes we then passed, but I told him there was only one trail from the lake. As it turned out, we had taken the Sand Ridge Trail. This was a high route back to the cars, which had a little more gain and miles, but we had the time.

I snapped more photos of the Sand Ridge high trail and vistas, then we descended back to the junction of the original Glacier Lake Trail we had started up. Coming back to the wrong, side trail junction, someone had left a small pack on the ORV sign, there. It was my belt pack with my back-up camera gear! I must have failed to put it back into my main pack when I stopped to look at my map! Great to have honest hikers about! It would have been a terrible loss to have my gear taken or lost.

Passing, again, the USFS mapboards, the trail graphics are wrong or incomplete. The sight of the Buttes to the east (lower photo) made me happy, with many memories. 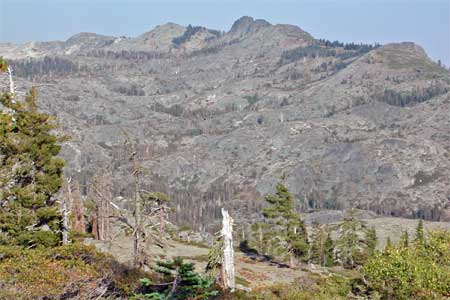 Back to the car at 5:03 p.m., my fellow hiker used the stone restroom, and I picked him up as I motored by. I asked for patience as I so very slowly motored along, almost down to a fast hiker's pace. Better to take my time than to suffer damage to my car! You want to be careful of sharp rocks, too, to not puncture your tires.

I stopped to snap photos of the bad parts of this road, and finally after an hour and a half, we made it back to pavement. Hardly 3 1/2 mph! My car so gratefully made no funny noises, and motored well down the hill. We stopped for some late evening vistas, then were back to the Interstate.

Great! I had done it again! I asked for no gas sharing as I dropped him off, and hope he will stay in contact for more climbs to do. First ride is gratis, for such a great hike, scramble, and route check.

The day totaled 9 miles and 2,100' gain. I shot 146 images, with no back-up. I had been disturbed, so forgot to set my main camera to fine, among other things. Better for photography with a slower partner, as I'm used to. He is probably 25% faster than me, but if I can allay the impatience, I won't fear, so much, the somber and potentially costly consequences of being rushed.

We had a few mosquitoes attack while stopped for quick pictures on the drive out, and nowhere else. The smoke maybe dimmed the sun, so it wasn't too bright. The mule ears have dried, and I noticed no flowers. Some red heather heralded the fall, and it was nicely cool as we had climbed the trail back to the parking area. I wore just my T with jeans, and used only two liters of water.

We saw a few backpackers and other hikers. Even a hiker with a llama atop a rock ridge! Other vehicles with 4WD drove the rough road almost as slowly as I did. I really hoped they'd have paved this road, as it leads into this beautiful area. I'm for wilderness preservation, too, here!

Having to get up really early the next day to meet for another peak in Yosemite, I was rushed all day. Better to have a day between climbs, but I have only so many ops for partners.