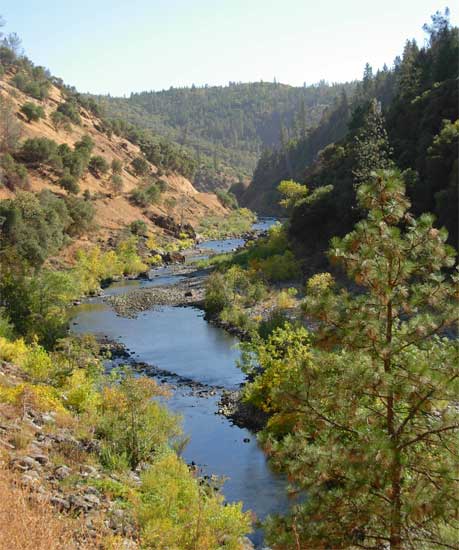 Faced with the sudden, unexpected failure of my back-up digital camera, I found, as usual, that repair was futile, and I had better get another new camera. I was due for an upgrade, but held off for a few years. My main digital camera (2001) is still working well, but the advertised, new, features on a Fall, 2006, model camera were too tempting.

Rather than buy another inexpensive or low-end model, I sought to go for the best in the price range I wanted. Electronic hardware always gets better and cheaper, if you wait, but I figured to get what looks great, and with my plastic, will delay paying for it till about Christmas time. Prices are so low, for memory, too, that it seemed definitely the time to go for it.

I walked and shot about a local park to make sure it all worked, a worry when buying mail order. I am trying to get the best deals. I even thought to return it, but then what do I use?

Leaving home in mid-morning, this Wednesday, I zoomed up Interstate 80 to the confluence of the North Fork and Middle Fork of the American River. Wanting to get used to this new, smaller camera, I also wished to post a review on the Net, and advise others of the capabilities and shortcomings of this recently introduced camera model.

Parking along the old highway, I started up river on the Lake Clementine Trail. The sun was out, and the sky was blue. It was windy, so I thought to avoid the dust-blowing breeze by hiking in a river canyon, which worked a bit.

I am concerned about the new camera switching on, somehow, inside my pack or carrying case, but it emits a short tune when the power button is pressed on. I figured that may have caused the early demise of my now other, broken camera, as slight, accidental pressure may turn it on, and then, in a case or my pocket, the lens assembly would be blocked from extending, perhaps resulting in something like the now permanent, "system error" message that the old (2003) camera shows.

The river was low, but some slight colors were displayed. I hiked along, and the trail was dry. No bugs or ticks. Not then much to shoot, though. I came to the other end of this trail, and turned around. About 45 minutes to here.

Two other users were hiking, and I shortly returned to the highway.

I sought to again try the movie mode, with the rapids along the Confluence Trail, up the Middle Fork. The reflections of the sun on the river caused highly annoying, broad, purple streaks on the resultant movie. This didn't happen with my former cameras. So, I have to just not shoot into bright sun reflections using this mode, which is otherwise impressive quality. The manual said something about this. These broad purple streaks also appear in the LCD monitor when I'm shooting stills, not even into reflections (!), but don't affect the finished still image. At least I'm not paying that much. The tech support had reiterated that this is a point-and-shoot camera, not a professional model.

Back to the car, I motored up CA 49 and parked in Downtown Auburn to walk about quickly, and shoot what's new. With a larger capacity for megapixels, I can crop to pretty small dimensions and still post a sizable image on the Net.

Then, I checked out the library, and later hit the Old Town. Most all was about the same, here, with some fall colors peeping out.

Perhaps, some firmware update will resolve some of the technical problems, and then this camera would be a bargain. I basically committed myself to getting this, and do recall similar bugs on my first digital camera. It is surprising that such a major, normally high quality, brand wouldn't be too with it, in all the features. Many would give this camera a low rating. I am impressed with the anti-blur feature at maximum zoom, which gives me sharper telephoto pictures, given my usual lack of a tripod, and sometimes shaky hands.

They'll get better and cheaper, but my time for a new camera is now.

I hiked some 4 miles with a few hundred feet of gain. I shot over 100 images and movie clips. It'll take some more use to fully realize all of the features, but I have no big road trips or peaks planned. The new technology is a big selling point, but I'd have stuck with my first, main digital camera, until it gives out, rather than using it as my replacement, back-up camera, for further along.