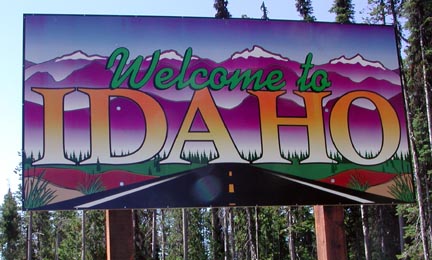 Taking full advantage of the cooler summer weather in town for the last month, I saved my money and car, waiting. Rather than re-climb so many local peaks, I opted for a longer summer jaunt to Idaho.

I ordered a new day climbing pack (below, christened here on Borah Peak) by the Internet, and it came mid-afternoon Wednesday. I had my gear packed, so off I went, eastbound, on Interstate 80. Thunderclouds graced the sky, and I enjoyed my first vacation sunset in Winnemucca, NV. Easing into this vacation with a first night's stay in Elko, NV, I continued the next day to Wells, NV, and U.S. 93 north.

As I passed through Twin Falls, then Shoshone, ID, more thunderclouds appeared ahead to the north, boding ill for my planned climbs and hikes. Catching some rain while I passed through Ketchum, ID, the sky broke into partly cloudy weather as I approached the Sawtooth Range. The view was fine from Galena Summit, and I hoped for a better day tomorrow. I stopped by Redfish Lake (second photo), where the vistas are classic.

I had to purchase a forest pass ($5 for three days) for the USFS trailhead parking, then camped along the Salmon River. 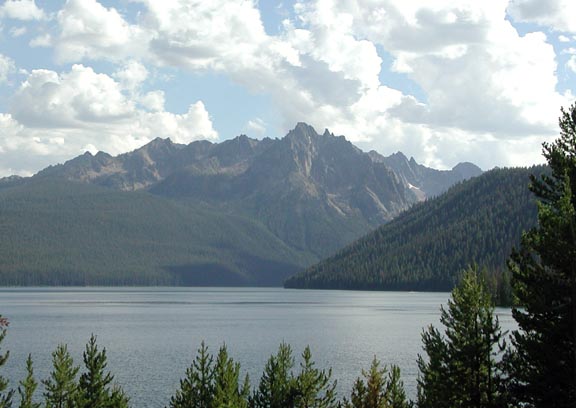 The morning was clear, Friday, and I enjoyed a fine, early breakfast in Stanley, ID. I motored over to Stanley Lake, where I began my hike to Observation Peak. The trail runs flat for two hours, then climbs gradually. I used the self-service wilderness permit facility at a trail junction, entering the Sawtooth Wilderness.

The weather held beautifully, and after four hours and twenty minutes, I summited this easy climb. I had been advised the views were spectacular by a poster on the SummitPost website, and they were right! I snapped away with my cameras, and placed a better set of cans and book for the summit register.

I departed after an hour on top, then ran into other users as I returned to my car. There is a Bridalveil Falls here, but it is pretty far up the side of the canyon to be a good photo. With plenty of daylight, I drove north on U.S. 93 up the Salmon River Canyon, stopping frequently to take in the scene. Coming to Challis, ID, I took another room, needing to recharge my digital camera batteries. The thunderheads lit up in the sunset.

A bit stiff and sore after this 14 mile hike, I chose to head north, Saturday, taking a relax day. Motoring up U.S. 93 along the Salmon River in fine weather, the towns of Salmon and North Fork, ID, made for some interest. Continuing all the way to Lost Trail Pass (7,014'), I dropped down north a few miles into Montana. Looking for a good vista point, I came to none, so then motored back to drive to nearby Chief Joseph Pass (7,264'). No great views there, either, despite the assurances from an information center volunteer. The state border welcome signs made for good photo ops (above), though.

I retraced my route back south, seeing plenty of signboards relating the history of the area, dating back to the Lewis and Clark Expedition. I stopped and quickly took a photo commemorating the history of the town of Salmon, ID. The Salmon River turns west, making for some 63 miles of wild river as it heads for the Snake River. Avid rafters know this stretch of river well. 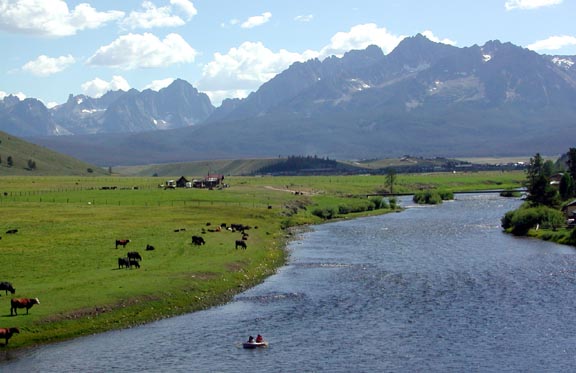 I decided to check out the Mt. Borah trailhead. Borah Peak is the high point of the State of Idaho, and makes an excellent peak to bag. People were camped to ready for the next day's climb, and some hikers were returning from the top. The sun was out, with puffy clouds. I decided to go for it. I had some groceries from a store back in Challis, so camped, to get light rain in the night.

The next day, I did the peak.

Back from the climb, I was game for another affordable motel room and food. I found both in Arco, ID.

Monday, I visited the nearby Craters of the Moon National Monument. I hiked the Inferno Cone, Broken Top, and Devils Orchard Trails. The clouded sky provided soft light, and the morning temps were nice.

Motoring southeast to Interstate 15, I headed south, then west, passing by Pocatello, ID, on my way back along I-86, then I-84. I chose to make a side loop through the City of Rocks National Reserve. I got gas and another free car wash in Twin Falls, then headed back south on U.S. 93. Observing a great sunset from Hollister, ID, I made a short stop in Jackpot, NV, looking for cheap lodging. I wound up back in Elko. 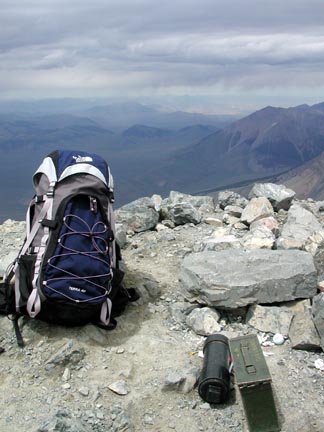 My last day, I motored up Lamoille Canyon in the Ruby Mountains, and hiked Liberty Peak for my 2X. This is perhaps Nevada's easiest 11,000 foot peak, with a trail most of the way. The Ruby Crest Scenic Trail runs to Liberty Pass (10,450'), whereupon easy cross-country travel takes you to the class 2 summit. I recommend this peak for it's "top of the Rubies" views, but I had to cut my summit stay short when I heard thunder. Dark clouds were forming above.

Back to my car, I headed to Interstate 80 and westbound I went, keeping to the 75 mph speed limit. Refreshments and my a/c made the long drive better, although I sure wished I had cruise control! The sunset down from Donner Summit was not much, but I made it home safely enough. I had my worries about my digital hardware, but all performed beautifully, and I spent an hour downloading all my trip photos.

A few mosquitoes bothered me, enough, for me to apply repellant, and I saw one big red tick. I found no bites on me, but did get pretty sunburned, though. My new pack carried very well, and though I lugged some 25 pounds up the peaks, felt the weight far less than with my last couple packs. I am pleased that all went so well. People were friendly enough, and though I feared for some unfortunate event, none occured. But, I do doubt that I'll ever do this again.