Having organized and led over one hundred official activities for the Sierra Club and the California Mountaineering Club, ended in 1999, it is my intent, with this section of the Pete's Thousand Peaks web site, to inform the interested public about the past opportunities for peak climbing about this area of the Pacific West. 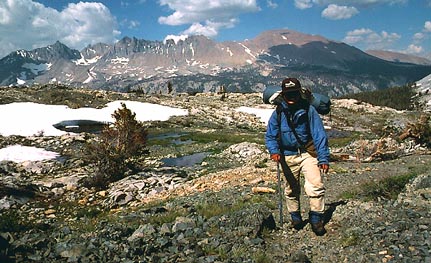 Leading a few trips for the Peak and Gorge Division (1968-1998), as well as for the Winter Sports Section and Day Hikes Section, in the period from 1977 to 1980, I then organized and chaired the Climbing-Knapsack Section (1981-1987), which was more ambitious in scope. Some of these trips entailed very strenuous hiking, climbing, and ski mountaineering. Participation was thusly limited to a few. If you could move as we did, you were welcome. A high fitness level, as well as climbing and/or skiing skills, was a prerequisite for signing up for many an activity.

Personally, at the time, I ran or jogged about four miles or more a day. This went up to six miles later. I maintained a regular schedule of challenging activities almost every weekend, at some times. I worked at a day job with required heavy lifting, and standing for long periods of time.

Formerly, too, I was an I-rated leader for the Angeles Chapter, Sierra Club. While I obviously have led and completed numerous activities of far greater difficulty than I (intermediate) levels, the Angeles Chapter rules require lectures, check-offs and other proficiency tests, now soon to include current, First-Aid, training. I had no great objection, since I could lead M (moderate), E (exposed), and T (technical) level activities for the California Mountaineering Club. I am no longer a member or have any association with either club.

In 2015, I attempted a slight come-back by a local Meet-Up group. Most likely, I am done with leading trips.

Some omissions are unavoidable. Generally, less substantial ski tours, climbs, hikes, private trips, or other unofficial events are not mentioned here, nor are leads by other groups and climbers. Unless noted, all accompanying photos are taken during the trip described. Please contact me to initiate a live chat session, for questions, comments, or suggestions. And about leading...

RUSSIAN PEAK, BOULDER PEAK, AND BASE OF CASTLE CRAGS August 30 to September 1, 1986

All text is written from these actual activities, and all photos are taken on the actual activity, unless otherwise stated. Some simplification is necessary for the purposes of readability. Due to the time of authorship, some phrases may be written in the present tense. All references are accurate as to the stated time and date of the activity.

DISCLAIMER: In most cases, you should be a well-equipped and highly experienced hiker, climber, or wilderness skier to undertake, duplicate, or repeat these activities. Hazards and great danger, with potential loss, injury, and even death, are implicit in all wilderness travel, and also other forms of travel. Search, rescue and evacuation costs are generally the sole responsibility of the recipient.

My archival page, for older trip reports with photos, is currently under construction.