Planning for years to do this, most of my life I wished to just climb the peaks. However, with the current, general lack of interest and fewer opportunities, I decided to see the National Parks for once, finally at age 47, and whatever else on this largely auto tour vacation, to pass this summer.

Day One: After making a hotel reservation, I took a short drive from California to stay in Reno, Nevada. I did some shopping and movie watching to pass the time. I wanted to ease into this big vacation slowly, and spend some cash right away. 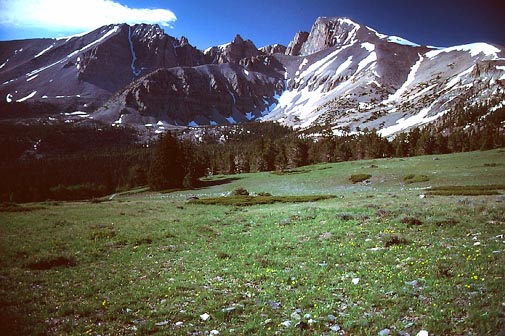 Day Two: Waking up at 2 a.m., I checked out of the hotel after a very early rib-eye steak and eggs breakfast. Motoring east on I-80, I drove to, then, U.S. 50. It would be much cooler to drive in the morning, since I don't have air-conditioning. When I bought my car, most auto makers still used ozone layer-damaging substances in the coils then. Coming to Ely, NV, at 9:30 a.m., I got some camping groceries, and continued to drive onward to Great Basin National Park. There, I hiked the Bristlecone and Glacier trails. By sheer chance, I ran into a DPS compadre. I found that I might join a private group for Ruby Dome this holiday weekend.

Day Three: After finding a missing hiker had been found, I was released from an impromptu, volunteer search and rescue. I then climbed Mt. Wheeler (13,063'). It was very windy, but I made the top after about 3.5 hours. This was my 2X, my first time being back in 1978, on a Southwestern loop adventure. Staying in the highest campground again, I made arrangements to join the private group at the trailhead for Ruby Dome.

Day Four: I drove back to Ely, Nevada, and motored north on U.S. 93, taking plenty of photos of the many ranges and sights. My auto tour to Elko, Nevada, was relaxed, entailing only about 200 miles of driving. I secured a cheap motel room, and feasted at a Basque restaurant.

Day Five: At the roadhead, I met the private DPS group at 5:20 a.m., and we took the trail to Griswold Lake. Ascending snow, we climbed Ruby Dome (11,387'), taking some six hours to the top. I shot many photos, and we glissaded, then hiked on our descent. We then were back to our cars at 5:45 p.m. After a look back, I had some food back in Elko, NV, and then drove to Wendover, Utah, where I again obtained a cheap motel room.

Day Six: Wondering what to do today, I chose to simply motor east along Interstate 80, and made photo stops enroute. I came eventually to Rock Springs, Wyoming, with sights along the way of Flaming Gorge National Recreation Area, and other side trips. I once again got a room, since I might never be doing this again. Having plenty of fun doing new things, I would have plenty more camping in the days to come.

Day Seven: Heading north on WY 191, I soon caught sight of the Wind River Range. I had longed for years to visit and backpack here, but had to be content this time with a short drive up into the range. I visited Elkhart Park, and took photos. Since there wasn't much to do in Pinedale, WY, I passed on a stay here, and continued then, north on WY 191, this afternoon, to Grand Teton National Park. I came to Jackson, WY, and later took several more photos of this highly developed town. I made an auto loop of the park, with almost as many photos and different views of the mountains as I could shoot. With the heavy snows, I couldn't do my planned hike to the summit route hut for the Grand. I had a pleasant restaurant meal back in Jackson, then camped at Gros Ventre Campground, with plenty of room there. 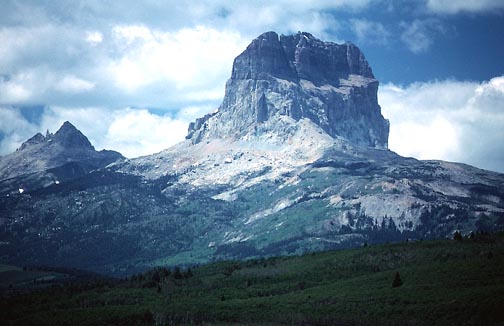 Day Eight: Waking early to catch the sunrise, I headed north again to tour Yellowstone National Park. I made the auto tour to see the initial sights and the visitor center, Old Faithful, the various other geysers, hot pools, the Firehole River, Yellowstone Canyon and Falls, and other sights. Since lodging here is expensive, I motored out of the park, then over beautiful Beartooth Pass (10,947'), through Red Lodge, and to Billings, Montana, where I obtained a motel room at a late hour. I had shot some 5 rolls of film this day.

Day Nine: I had to get an oil change. I then took Interstate 90 west, passing through plains and rolling hills. Distant mountain ranges were identified by highway signs. I made quick stops at Livingston, Bozeman, and Butte, MT, and noted Humbug Spires, a potential climbing area. I arrived to Missoula, MT. Nice town. I motored south a bit to see the Bitterroots, but never got a great view. I went west a bit along I-90. Going north on U.S. 93, I passed the Mission Mountains, to camp at Flathead Lake.

Day Ten: I spent a few hours in Kalispell, MT, then toured Glacier National Park. I motored over Logan Pass (6,646'), and headed east and then north a bit to a view of Chief Mountain. Motoring back over Logan Pass, I had an early dinner back in Kalispell, then headed west on U.S. 2. Lots of forested, rolling hills were to be seen. I stopped at the Moyie River Bridge. Passing quickly through the Idaho Panhandle, I came to camp along the Pend Oreille River on the Idaho-Washington border.

Day Eleven: I was up early, with a lot of ground to be covered. I drove west along WA 20. Passing through towns named Colville, Republic, Okanogan, and Twisp, WA, There is plenty of scenery approaching the North Cascades. Finally, in the afternoon, I passed through the North Cascades National Park. I hope to do some hiking here in the future. Continuing through Sedro-Woolley, I came to Interstate 5, and then went south to Everett, WA, where I obtained a motel room for a first shower in three days.

Day Twelve: I seek to visit all of the great cities of the West, so motored south to visit Seattle, Washington. My first order of business was to ride to the top of the Space Needle ($9). I rode the old Monorail ($2.50) into downtown Seattle, and walked about to see what could be seen. There is a wharf area, and interesting office building high-rises. I drove over to Alki Beach marine preserve on Harbor Island, and walked a bit more. I drove south, then, to Tacoma, WA, and saw the bridges and the University campus. I could see Mt. Rainier from my motel room walkway, and snapped a telephoto of this magnificent mountain. 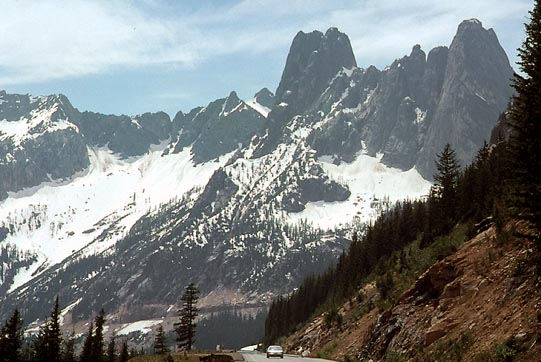 Day Thirteen: First checking the town of Black Diamond, WA, I motored south to visit Mt. Rainier National Park. Making stops at the popular points, I shot many more photos, and saw that this was a big snow year for the Cascades. I declined to do some planned hikes. So I left and motored south, hopefully to see Mt. St. Helens and Mt. Hood this day, too. Becoming fatigued, I had food and rest in both Packwood and Randle, WA. I wound up camping in the Gifford Pinchot National Forest amidst an ancient forest.

Day Fourteen: Up early again, I saw Iron Creek Falls, and then took the paved road to Windy Ridge, coming to Mt. St. Helens National Monument. I had a fine view of Spirit Lake, and did a bit of hiking. Motoring again south on National Forest road, I finally came to the Columbia River Gorge. Windsurfers abounded, with excellent conditions today, by them. I stopped at Hood River, OR, for food. A nice shot along the highway, OR 31, made for a close-up of prolific beargrass. I then quickly visited Timberline Lodge and Mt. Hood. I continued through high desert to Bend, OR, and hiked Pilot Butte (4,138') for my 3X. I knew a cheap motel, and rested there for my vacation's final night.

Day Fifteen: I took U.S. 97 south, to then cut over and visit Crater Lake National Park. This would be my seventh National Park to visit on this trip, although I had been here a couple times already. I took a ranger-led hike, then left by about Noon to motor west along the Rogue River Highway, OR 62. Headed south on I-5, I took a photo of Mt. Shasta, visited Yreka and Weed, CA, then arrived home at a late hour. This completed the day's 450 mile drive, and my best vacation as a tourist.

I had driven some 4,500 miles, getting some 55 miles per gallon on average, with some 35 miles and 10,500' gain hiked. I spent some $800 total, and shot over a thousand photos. I was fortunate that the temperatures remained pleasant, and the only rain was in the morning at Yellowstone. I had visited eight States, and satisfied my lifetime curiosity about what lay out there by the maps!