Routes, up to 5.8, with the Yosemite Mountaineering School

First pitch of the Pop Bottle, 5.4

One short aid pitch on one of the spires, A1

Faceclimb on one of the Five Sisters, 5.3 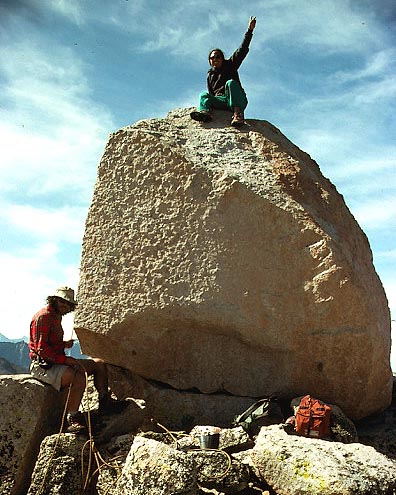 I was able to do eight chin-ups at once during this time, training at the local City College. I could go up and down the peg board 40 holes. My weight was about 150 pounds, and I would run several miles a day. You don't need to be weak or out-of-shape when your well-being depends on it.

While I have still, in recent years, completed some short moves, I don't believe that I will ever re-achieve this level of fitness again. There are capable rock climbers in their fifties, but they are an exception. So, if you can do this safely, when you are young, go for it when you can!

My last Sierra peak rock climb of much note was this ascent of the summit block of Glacier Ridge (12,360') on September 1, 1992. This is a simple class 4 bouldering problem. One can throw a rope over the rock, and thus, belay from below. We were critiqued by the leader, R.J. Secor, who was leading this trip for the California Mountaineering Club. I was told that I kept my weight above my feet well enough, counteracting the tendency to lean into the rock.