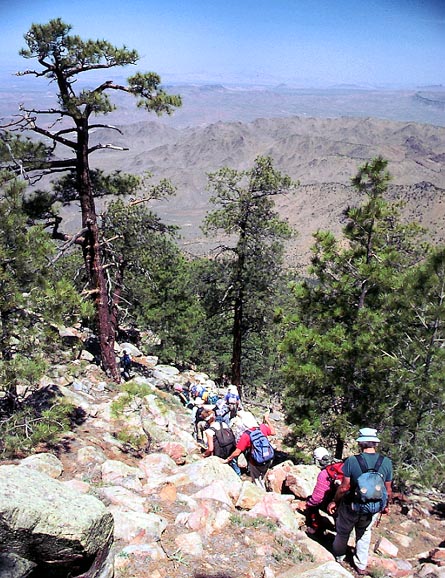 This was to be my longest journey to attend only a weekend Sierra Club trip. The Desert Peaks Section of the Angeles Chapter had scheduled three peaks for the Memorial Day holiday weekend. Even for them, it is a long drive. For the two of us, making the first few of many successful carpooling efforts, it was to total some 2,000 miles round trip.

Leaving Friday morning, we took I-40 to Kingman, AZ, where we dined, then car camped in the Cerbat Mountains slightly to the north. The group was to meet at a highly obscure, little cluster of buildings on the way to the roadhead. Mt. Tipton is the highpoint of the Arizona mountain range to the east of U.S. 93, here.

Needing 4WD vehicles for the rough road approach, we found a hill to park on, and began our hike at 7:37 a.m. Approaching up a wash, we reached the base of the peak. Ascending cross-country through brush and rocks, it was scenic and pretty. Many cacti were blooming, and made for a quick picture.

We saw a rattler, and soon, climbed to the upper parts of the mountain. Pine trees replaced the lower elevation vegetation, and the rocky summit came into view. On top after a three hour climb, I noted that other groups had taken much longer. This peak had been reputed to have the worst brush, but our route apparently avoided most of that.

We descended back through the conifers, and then were back to the cars by 1:30 p.m.

There was a lot more driving to get the furthest peak, Navajo Mountain. Because it is a drive-up with a good vehicle, some feel it is a waste of time to have to do for a list completion. But it is a prominent, and holy, mountain, situated in far Southern Utah, and offers real red rock desert scenery and a good adventure to get to.

We continued driving along I-40 to Flagstaff, AZ, and then north on various roads to the Reservation lands whereupon the peak is located. Making a car camp enroute, we met the next morning at a road junction, with a view of this lone formation.

Parking our cars where the road gets rough, we chose to make a hiking ascent of this beautiful mountain. The 4WD road leads simply to the top, although we took a shortcut where the road makes a big switchback. Again, pine trees graced our route. A communications facility marks the true summit, but a little further walk to the north brings one to a spectacular view, of Utah's red rock country. Lake Powell and Rainbow Bridge are visible, with perhaps a 150 mile vista possible on a clearer day.

We had a leisurely hike back down the mountain. The rock towers of Monument Valley could be seen, at points. The total time round trip was about 7 hours.

Driving back south to Flagstaff, we made another car camp, before our last peak, Mt. Humphreys, the highpoint of the State of Arizona.

I had already climbed Humphreys in 1978, on a solo Southwestern tour. Back then, a youth conservation crew was working on a summit trail. This trail is now completed, and makes for a good hike, forgoing the cross-country, rocky climb that I had done back then. This is also considered a holy mountain to the local Native Americans, although it is under the jurisdiction of the U.S. Forest Service, and a ski resort resides on its lower flanks. It is starkly visible for many miles in the Northern Arizona region.

We took the trail, but soon ran into snow. The leaders chose to take us cross-country on a scree shortcut that avoided the snow. Some rare plants grow in the area, and I hope we didn't disturb any. Regaining the trail along the summit ridge, we continued to the top, arriving after 3.5 hours after our start.

The area is full of geologic activity, with many craters, including scenic Sunset Crater, to the east. To commemorate our climbing and driving effort, the remainder of the weekend group posed for a photo right atop the summit.

We were back to the cars in the ski resort parking lot in time for most to get home that Monday holiday. Our carpool headed west on I-40 to witness a beautiful desert afternoon sun in clouds. We came home on Tuesday morning.