Right after my weekend with a day climb lead of Mt. Ritter in the Sierra Nevada, my old buddy Fred and I chose to bag some peaks in the State of Nevada. We headed first up I-80 to the roadhead for Star Peak. This is the highpoint of the Humboldt Range, outside of Lovelock, NV. Star Peak is also the highpoint of Pershing County, NV. Unfortunately, we didn't consult the guide well enough, and took the wrong road toward the peak.

Starting a hike up the wrong road, then, we came upon some blazing star flowers, and as we climbed higher, realized our mistake. I had already done this peak in winter, 1973, anyway, but I am always willing to do more peak ascents.

It was too late in the day to try it again, so we headed east on I-80 to drive-up Winnemucca Mountain. This big hill to the north of the town of Winnemucca, NV, is marked with a big "W." A paved road leads to the communication facilities on top, with a nice view of the town and surrounding country.

Taking U.S. 95 north, we camped in the Santa Rosa Range at a pleasant, official site in an aspen grove. Having done some driving about, we obtained a good recon of this remote area.

Getting up early, we drove to Hinckey Summit (7,867') whereupon we started our hike to the top of Granite Peak, the highpoint of the range, and, also, of Humboldt County, NV. 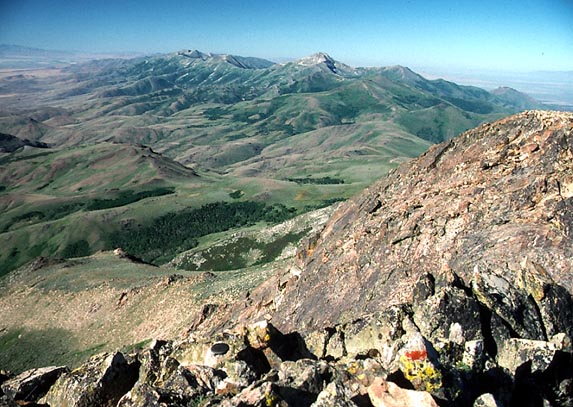 A dirt track leads a ways, then a use trail finalizes the climb to the top. The flowers were aplenty, and the weather was breezy but clear. There are several more peaks in this range, enclosed by a wilderness area.

Getting down in an easy two hours, we motored south into Paradise Valley, and Fred enjoyed its famous bar. I spent a long night here in February, 1979, with a local chapter car snow camp and ski tour, in the times they did such things.

We drove back south to I-80, and then east to Battle Mountain. Taking NV 305 south to Austin, NV, we camped at Bob Scott Summit.

The next day, we took a recon of Bunker Hill (11,474'), from near Kingston Guard Station, on a dirt road to the southwest. I had also, already, climbed this peak in 1976 with a local chapter peak climbing group. But, being the highpoint of Lander County, NV, Fred wanted to climb it. We did about a thousand feet, when it became steeper and warmer. A good stand of columbine marked a stream crossing.

We saw many unusual sights on the way. Mossy rock, with gnarled snags, made for items of photographic interest. Calling it a day, we returned to the wagon, and drove on to camp somewhere.

On the First of July, we motored back west on U.S. 50 and did a short ascent of Mt. Airy. A roadside rest makes a good starting point. I found this easy climb scenic. We all are looking to determine areas worthy for preservation, although this particular area is bounded by roads, on the maps.

We convened for several hours at a cafe at Cold Springs, NV, where we awaited a Sierra Club group. They came by, and we drove to a roadhead and campsite on the southwest end of the Desatoya Range. Desatoya Peak is the highpoint of Churchill County, NV, and was desired by both Fred and me.

The Sierra Club group had its standard, group commissary dinner, which made for good pictures in the twilight sun. I tossed out my tarp, sleeping bag, and foam pad, as usual, and rested for the climb the next day.

In the morning, we were led up the big, creek canyon, which doesn't go through directly. The leader backtracked to take a long, talus slope to the top of this creek canyon rim, then along a slope to the main ridge. Animal trails, presumably made by wild horses, follow this main ridge, for miles, to the summit. We all enjoyed the view, and signed in the register.

Hiking back south along the main ridge, I took a picture of three Nevada ranges. We took a different way down to avoid the narrow canyon, and then to intersect a dirt road which led back to our campsite and cars.

Fred was too tired for any more peaks, so we made the drive home. Our hiking stats on this extended trip totaled about 25 miles with maybe 8,000' gain.