Leaving home Wednesday afternoon, the 17th, motoring up Interstate 80 was fine. I joined a Reno Sierra Club, Great Basin Group, evening hike. We were up for a short walk up a canyon in southwest Reno. I climbed a small bump separate from the group, and obtained an elevated view of a southwest Reno neighborhood.

Camping at Davis Creek Park, I then drove south Thursday on U.S. 395. A new logo sign was placed in many spots to designate this a scenic highway. These new display panels now explain the natural history of the area. The view of Dunderberg Peak held little promise of good skiing. I took the short trail along Lee Vining Creek, from the Mono Lake Visitor Center. Also, there were more new stretches of four-lane blacktop in spots about June Lake. San Joaquin Mountain had plenty of snow. There were the usual sights to be seen. Camping in Bishop, I made other checks on things.

Friday, I continued south, stopping at the Eastern Sierra Museum in Independence, and taking pictures, near Lone Pine, of Mt. Whitney. Driving up the road to Kennedy Meadows in the South Sierra, I took a camp spot in the campground a few miles to the north.

Saturday morning, I met the others, of our SPS group of 13, at Kennedy Meadows store. Our objective was a triple peak climb. These peaks are all in the South Sierra Wilderness. We drove to the Hooker Meadows trailhead, and began backpacking at about 9:18 a.m. The trail is signed.

Arriving at our backpack camp beside Albanita Meadows, we had lunch and prepared for an afternoon peak climb. We hiked up a trail and, then headed cross-country for Smith Mountain. 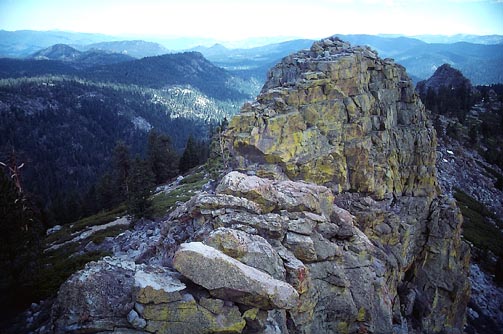 We hiked, and then climbed the short, easy, north ridge to the top. The view was good. Olancha Peak to the north showed little snow on its south side.

We then hiked over to climb nearby Jackass Peak, which is a mild class 3 summit. It also had a register.

Back to camp at about 5:35 p.m., we prepared our meals. I boiled water made from snow. A small patch nearby served as alternative to the stagnant, reddish-brown creek water. The night was a bit cool, and frost covered my bag in the morning.

We began hiking at 6:40 a.m. for our ascent of Crag Peak. We were led to contour south around the ridge with Finger Peak as its high point. There was thick manzanita and rocky cliffs. It seems preferable to climb over the Finger Peak ridge more directly, and drop down 300-400 feet to a saddle leading to the Crag Peak summit ridge.

We went around to the east side of the summit rock, and found a class 3 route to the top. There wasn't much room on the top, so we climbed and descended in groups of three.

I summited at about 10:30 a.m., taking photos of the view. We then descended a talus slope from a notch to the south of the summit dome, and climbed back over the first ridge to descend back to the meadow. It was then easier walking.

Monday morning, I took 395 to I-15 to I-215 to I-10 east. Motoring up CA 243 to Idyllwild in the San Jacinto Mountains, I hiked up the Devils Slide trail to do Tahquitz Peak. Here, an old fire lookout commanded the view. I descended back down the summit trail to the PCT, with a sight of Lily Rock, and headed to the north side of Red Tahquitz. A use trail leads to the top, and the view was superb.

Hiking back to the car, I drove back to San Bernardino, CA, and secured another motel room. There is fine dining at the I-10 Waterman Avenue Exit, along Hospitality Lane.

Tuesday, I drove up past Mentone, CA, on Highway 38 to the Forsee Creek Trail. A 4,000' gain hike on trail ascended to the summit of Shields Peak. Signing in, I recorded the view. I did the short traverse to the top of Anderson Peak, which is the highpoint of the San Bernardino Mountain group of peaks. A view of San Gorgonio Mountain to the east showed some snow on the Dollar Lake summer trail. There was some snow on the Forsee Creek Trail I used, but I didn't need any special equipment. Gore-Tex boots would have helped, though.

I spotted snow plants enroute. They grow on decaying forest material, and are a rare, and pretty sight.

Back to the car at 5:45 p.m., I refreshed myself with a drink bought at Angelus Oaks, then drove back to Waterman Avenue Exit on I-10 and got another room. I enjoyed more fine dining at various restaurants here.

Wednesday, I drove up I-15 to turnoff to Wrightwood. There, I had a nice breakfast. The USFS ranger station was closed. I was unable, then, to get a day-use wilderness permit. From Highway 2, the Angeles Crest Highway, I chose to hike along the PCT to climb Mt. Williamson, which is not in any wilderness area. A side trail leads to the top. The valley below was covered with low clouds. It was quite a sight. Clouds came in. Thunder was heard as I returned to the car parking, so with rain imminent, I declined to climb any more peaks. I drove back to I-15 south, and cut over west through Rancho Cucamonga. I sought to check for a hike up from Icehouse Canyon, off the Mt. Baldy Road. The Mt. Baldy Ranger Station was already closed. I drove back down to Ontario where I secured another room yet.

Thursday morning, it was raining. Canceling my climbs, I drove west on I-10 to Los Angeles, where I visited Little Tokyo and a museum, before driving home on I-5.