I had been game for some desert peak climbing for a long time. I tried to schedule a spring break desert activity in the local chapter schedule for years. No takers!

Finally, my peak companion Rex had retired, and was now available for this trip. He knew that he would get expert guidance, and highly economic rates on lodging and transportation. My thought later was that he was "led and fed, driven and given." His only shared expense was to contribute to the gas costs, a drive of 1,850 miles, all at about 35 miles per gallon. Since he would never return the favor, I asked the local chapter rate of 5 cents a mile.

We left on April 2nd, to motor down past the still snowy High Sierra, along U.S. 395. We took the turnoff to Death Valley, then on Highway 190. I took a photo of Panamint Butte, a peak that I still need.

Camping at Stovepipe Wells, I awoke early to discern that it would be a warm day. Rex says he is a morning person, so he didn't object much to our leaving early to the parking spot for Corkscrew Peak. I had already done this peak, but since he needed it, we would do it.

I led the way, knowing where there was a use trail. We approached the massif, and I took a different way, presumably the way the DPS uses as per their Guide. It wasn't as good. We had to climb a steep gully, with loose, rubbly rock. It led to a short class 3 section, where I waited for him to make the move. For awhile, I didn't think he would make it.

We reached the route along the main ridge, and climbed slowly to the top. There is a trick to the route, which I knew from my ascent in 1983. I tried to photo-document this route a little better. It was my general plan to photograph the critical points on every peak I was to climb, for a photo guide to the peaks. The idea was to arrow in the route as climbers would see it, all using a computer. By a picture, you would head for the arrow, and then, have another picture with another arrow on where to head, then. I feel that present climbers guides are much too vague, and often of little value. As Confucius said, "A picture is worth a thousand words."

We reached the top after a cooling breeze allowed us to. I was pleased at our first peak ascent for this trip. I looked at the register. We descended quickly along the regular route that I now use.

Back to the car, we motored over to Furnace Creek, and toured about, viewing the historic sites, and for me, photographing the spring bloom. Driving on south and then east on Highway 190, we came to a view of Pyramid Peak, which we had climbed in 1986. The peak doesn't look anything like we saw it that time. Mountains have many sides, and one cannot assume from one view that it looks about the same from another view!

On a short stop, I saw that I had a leak in one tire. I changed the tire, but since it was now a weekend, and we were so far from towns, I couldn't get it serviced and fixed. We drove to Shoshone, CA, where we dined and camped nearby. 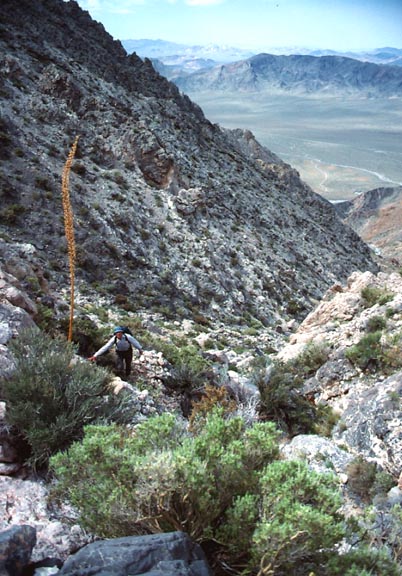 Our next climb was Pahrump Point. We drove northeast on Highway 178 to the parking near a dirt 4WD road. We took this road two miles to the regular 4WD parking, then followed the main gully up the peak. It was very rocky and rough. Only a few hikers would have the determination and verve to do this. Rex had done this peak before, so I thought he would be of some help on the route. He didn't remember much. Luckily, I had my copy of the guide, so found the way. The first person to find this was very smart--a real peak pioneer!

We reached the main ridge, and got more views. The top was a short way to the left, or north. There was the usual haze in the air, so my 360 degree panoramas will be of little value, except to record the view. I would know if a photo was taken at the true summit, since I will have my own record. Once, one person at work had produced a purported summit photo, which I knew just from memory that it was not! I sadly told her that this was not taken from the summit that her friends claimed!

We had pleasant weather, and enjoyed looking through the register. Indeed, some of the local chapter desert climbing group had signed in on this one.

We downclimbed and found our route, thanks to my good memory and some ducks. The climb is by no means finished upon reaching the summit! We had lots of time, and I looked forward to another climb the next day. Some purple/pink flowers were nice photos, with the sun more bright now, after the morning's clouds.

Back to my car, the tire was again flat, after I had pumped it up at a gas station in Shoshone. I once again changed it, and we drove back to Shoshone to enjoy the end of the local arts and crafts fair. We camped nearby, and Monday, drove to Pahrump to get the tire fixed. A small metal burr was shown to me to have caused the leak.

We motored out to U.S. 95, where we planned to climb Mt. Stirling. Following the guide directions, we came to a highly indistinct dirt road with a gate. "Wow," I said. "These DPS climbers take on some bad roads!" There was no way with my passenger wagon, and also with plenty of snow on the peak.

We headed on south to Las Vegas. Getting to this great metropolis, I had to make some alternate plans. We found there was a museum, so we looked for it. Finding it by signs, we took a look at the Las Vegas History Museum. There were interesting exhibits. Mainly dwelling on recent history, I read that the 1950's Las Vegas was noted for its diversity, despite the segregation laws that governed much of the rest of the nation at that time.

We drove on into the old downtown section, or as it is known, "Glitter Gulch." We checked on hotel rates. This was midweek, so the rooms would be cheaper. We got a reasonable room rate at the Union Plaza Hotel, right on the end of Fremont Street. The weather had turned stormy this day. Checking in under a roof, today, made good sense. Rex had set a condition of less camping on this trip, which I agreed to, knowing the great lodging deals advertised in the L.A. Times.

Tuesday, we woke up early, and had a $1.99 rib eye steak and eggs breakfast. This is a lure for gamblers, of course, but at 5 a.m. in the morning, we were the only ones, almost, taking this fine meal.

We drove east on Interstate 15 toward Arizona and Utah. I had my sights on Moapa Peak. Another local chapter group had failed to climb this peak, due to weather, but it interested me in that there were two class 3 sections to get to the top.

Reaching the proper freeway exit, we looked at the peak. It can be seen many miles away, bringing some apprehension as it looks very steep and high. I took a deep breath, and we got back into my car, and I drove toward it. There were rough parts on the dirt road, and the guide wasn't real accurate. Able to drive to within three miles of the roadhead, I had to stop and park before a washed-out section.

Getting our gear together, we started hiking on this dirt road by about 10 a.m. There are some dips in this road, and Rex announced that by his altimeter, we climbed some 300 feet just getting to the regular parking.

We wondered if we should continue. One tactic is to go by the clock, setting a turn-back time to return by dark. I thought we could do it, and it takes a game heart to try such things. Walking through Jacks Pocket, a name on the map on a flatter area, we began the climb upward. Clouds and beautiful light shone on the desert hills. We came to the first class 3 section. There were lots of ducks. I found a way, and Rex followed.

We came to features that the guide described. We were on route. As we came to a long traverse, I spotted a bighorn sheep, and then its lamb. They circled us warily, but seemed curious, at first. We stayed motionless. I began to take pictures, then came up with one good one. They scurried away, and we waited to not panic it. After it disappeared, it had shown the route to the summit. A dirt trail along the cliffs went horizontally, and then up to the main summit ridge. This animal trail greatly facilitated our hiking time. I knew from others' accounts that many bighorns lived up here. 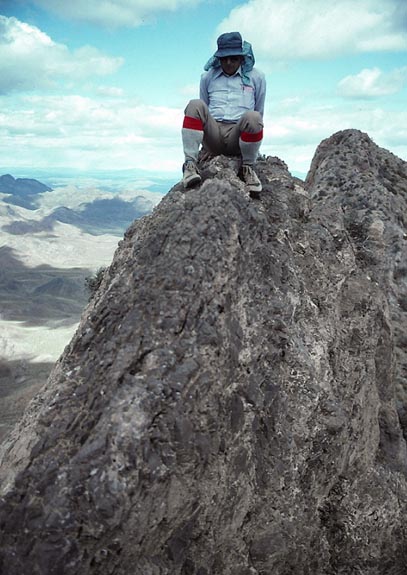 By good navigation, we came to the class 3 summit knife-edge ridge. Remembering from one description, we looked for an easier way on the right, then found there was none. I went back to the northeast end of the knife-edge, found the short, rocky route up to it, and then saw the rest of the route. I had some queasy feeling that it might be really exposed, but it was a piece of cake. Rex found it easy, too.

Then, after some five hours of climbing, we reached the register and the top. The views were accented by clouds. The hikers guide calls this a climbers' favorite. Most of the entries were by the DPS. I had a fantasy that Vegas showgirls used this hike as exercise. Not to be!

We had heard loud booms, which we thought at first, were thunder. We surmised that it was ordinance exploding at a military testing site far away to the west. We were just getting involved in Bosnia.

On our downclimb, I took the wrong big ledge back along below the main ridge. I knew something may have been wrong, but we continued. I realized my mistake, but thought we could find a way through. Losing precious elevation, we came to a relatively short drop-off. I figured it was too dangerous to try, so we turned back and added perhaps another 500 feet gain to our day.

I found where we had gone wrong, and hurried along, trying to race the sunset. We came back to the lower class 3 section, and had a delay finding the best place to downclimb. I did a spot, but Rex couldn't make it. I waited a few minutes, then suggested trying another spot. He did that.

Finally, we came back to flatter ground, and were soon on the dirt road. I had a headlamp, so all we had to do was walk the three or so miles on dirt road to the wagon, and then drive out back to the Interstate. We were back to the car at 8 p.m., about past dusk.

Motoring out on the rough road wasn't easy either. Rex yelled as I hit a rock while motoring back up a steep hill. Sometimes, a driver has to give it the gun, lest the car stall. A bit of momentum helps, too, on a steep section.

We got back to the Interstate, zoomed southwest to a small town where we got dinner, and then camped in the desert near the road to the Valley of Fire State Park.