Fruitless in my search for an assistant leader, I had to schedule this trip under the auspices of the California Mountaineering Club. I had secured the approval of two participants early in the year, so applied and paid for a wilderness permit reservation. I got one, for six spaces. We needed peaks in the area, for SPS climbing goal purposes, so I had to lead them myself, or not do them at all. 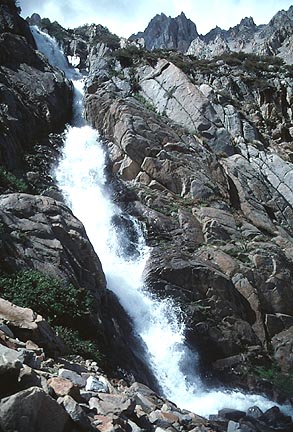 Leaving home on the first, the 100+ degree heat, and smoke from a Coast Range fire had gotten to me. Smelling burnt wood Monday night, I left Tuesday morning for this holiday weekend jaunt.

Feasting and being entertained around Reno, NV, I hiked and toured about town. Thursday, I took advantage of the low prices at the Patagonia Outlet holiday clearance sale, and then headed south on U.S. 395. Renting a bear canister at the Mono Lake Visitor Center, I camped high at Mammoth Lakes to avoid the heat in the Owens Valley below.

Our plan was to climb Arrow Peak (12,958') and Mt. Ruskin (12,920') over four or five days. This required a big effort to backpack over Taboose Pass, which alone entails over 6,000 feet of gain. After a nice sunrise, I asked the USFS rangers about the road to the trailhead, since I had taken it once long ago, and found it rough. They said "high clearance" still necessary. I had heard from others that I could probably make it. Only a try would tell.

Picking up groceries in Bishop, I drove in the evening to the Taboose Pass Road, and noted the ominous weather. One way, we would cancel, and I would have a relaxing trip. But, then, I wouldn't get the peaks, and I wasn't getting any younger. I was so close to getting my Master Emblem, I tried to plan to do the necessary trips each year. Arrow Peak was critical for me.

The road was passable, although I stopped frequently to move large rocks, and to scout ahead on foot.

In the morning, I met my two companions who had agreed to this trip. Two persons signed up from Northern California were no-shows. One other had appeared, but canceled at the sight of the weather. Low clouds hung about. It was dark and dreary.

But, I had the time, as the other two, so we made a start. The forecast hadn't been too favorable, stating more of the same for the next few days. Well, I thought. They aren't always right.

We hiked up through the desert, and reached the first pine tree in under two hours. The strain of pack weight was getting to me already, though. I was again loaded with canned food and other grocery items. I started with about four liters of water, too. And I had brought a light rope, with slings.

We sought for a good time up the Taboose Pass Trail. It stimulated my memory to see it all again. But, coming to the first creek crossing, the water was amazingly high. I didn't remember any problem in July, 1981. We had to wade. I used sticks left nearby, by other hikers. Taking about a half hour to do this, we continued on.

Mist and clouds came in. It was like winter in the Coast Range. We then came to the second stream crossing. It began to rain, then harder. We hopped across, then it let loose steadily. Thunder sounded throughout the canyon. We stopped to see what would happen. Kathy found a large boulder overhang for cover. We sat scrunched up, but out of the weather. The lightning strikes came close. What a way to start an important activity!

We were too far up to go back to the cars. We chose to camp nearby, as other hikers came down from higher up. I boiled water and tried to eat food and lighten my load. I assumed that the worse was that we'd pack out tomorrow. I ambled over to a nearby waterfall. Taking many pictures, this might be the only great photography that I'd do on this trip.

I fell asleep early. I had thrown an old poncho over my gear, rather carelessly, I found out later. During the night, it rained some more. I knew my gear was getting wet, but I figured that it would dry either during better weather, were it to come, or that we would just pack out.

The morning dawned bright and clear. My stuff was soaked. I laid it all out to dry it. I hadn't slept well either. I made plenty of instant coffee, and we chose to continue up the trail, to try for just one of the peaks. 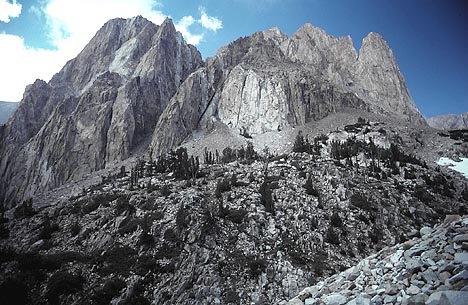 Beginning late, Kathy wasn't feeling well, and was slow. I figured it was a wash. The clouds came in again, and we called it. It wouldn't be fun to sit around in tents, not doing any peaks. In hours, we could be back to the cars and enjoying other activities. We crossed back over the creek, and soon were hiking in the desert. We arrived to the parking by 2:01 p.m.

It was a bit of a relief, since I perhaps overpacked, with some 50 pounds. I was thinking, this is getting to be too much for me. But, of course, this was a hard trip. We parted, and I was to head north. The dark clouds seen from 395 seemed to back up this decision.

My problem now was to return the rented bear canister. I couldn't make it back before closing time. So, I had to wait till 9 a.m., Monday morning, to be in Lee Vining. I visited about, noting the cloudy weather everywhere.

Camping, back in Mammoth, I got up early Monday. Then, after patronizing early opening restaurants, waited at the Mono Lake Visitor Center. Sorting my gear, I walked about. Returning the canister, I headed north to catch a view of the Sawtooth Ridge near Bridgeport. I came home by 3:06 p.m.

The backpack stats included about 4,000' gain over some nine or ten miles, round trip.

My trail and street wardrobe is almost all Patagonia now. I have picked up such good deals at the Reno Outlet, it doesn't make sense to buy anything else. I had to think about a new car, too, but I was to get a computer.

I love my trips down U.S. 395, and there are other things to do besides mountain climbing. While I remain about the only one that I know that does any of this, much outside of the Angeles Chapter, I don't need social approval.

The local chapter can run all the parties and dances they want, with their effective exclusion of wilderness peak climbing outings. I'll take rugged mountain wilderness, not smoke, booze, and whatever. They can have their expensive, wood frame homes and wasteful, indolent ways. Granite and pine trees, not beer and pizza for me!