Really ready for a peak after a summer with no partners, little cash, and apathy to re 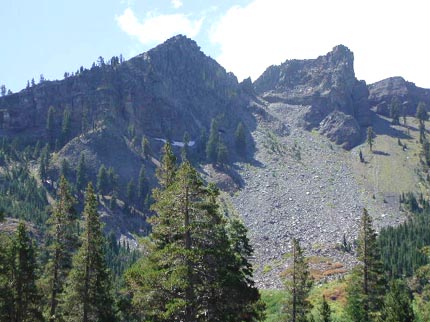 -climb so many peaks again for the nth time, I joined this Great Basin Group activity to do this easy climb.

Motoring about Tahoe City, CA, before the hike, I strolled about the main street recording the sights. Our meeting time was late in the morning, so I could get up at a more decent hour. Checking on my peak guide directions, I found new signs had been placed at the start of this hike. This is now more of an official trail, and marked as part of the Tahoe Rim Trail.

The group of seven others pulled in at the time agreed, and we began hiking up the gated dirt road that leads to the top. Even brochures were placed at the signboard here for the Rim Trail, but I took nought as I already knew the hype.

The temperatures were cool and pleasant, and no bugs were about. The sky was beginning to cloud up a bit, but it never did anything all day. Some T-showers had hit some areas hard the days before.

The trail was as it was, with a few things changed. We saw a few mountain bikers, and heard one dirt bike. Some other hikers passed by, and two backpackers claimed to be finishing up the entire 165 mile TRT circle--"10 (?) days." A small waterfall gave us cause for a stop, and there were a few leaves of aspen turned. As we climbed on the trail, we gained views of the peak.

The trip leader had me go ahead in parts, and we came to the upper trail junction a bit after 1:30 p.m. The trail to the peak goes right and up at an unsigned fork, with the left, lower fork apparently going, in a short way, to the rest of the Rim Trail and the PCT. The final 200 feet is some class 2 rock hopping, and some chose to stop and have lunch. A few of the rest chose to summit, me doing so by 2:25 p.m., about three and a quarter hours after our start.

The views were splendid, and I scurried about snapping photos. There was no big worry about rain, but some of the hikers had no rainwear, which could prove serious in event of a major downpour. The leader had other things to do, so after I placed a register, we started down just after 3 p.m., with some anxious to get back, slowly, to the trail. 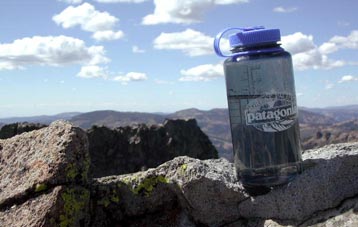 I had used a new water bottle to record the fact that the western summit was lower than the crag we were on, for the purposes of demonstrating the low tech way of the equivalent of a hand level. Still water will act as a plumb bob and sight, allowing some photographic "proof" of one's findings.

Joining the less adventurous group, we quickly hiked downward, and many chatted merrily to pass the time. The dust on the trail was thick, and we spread out to avoid breathing it from each others' boots.

Back to my car by about 5:40 p.m., we re-convened for a short bit, and then were headed our separate ways. I chose to save my money and abstained from much feasting on the way home.