My favorite hiker companion, for now, Bob, arrived at my home for this short Sunday drive into the Northern Sierra. Web rumors about parking access spurred me on to take the drive up U.S. 50. It had been almost a month since my last activity, although I do urban hikes to keep up my conditioning. 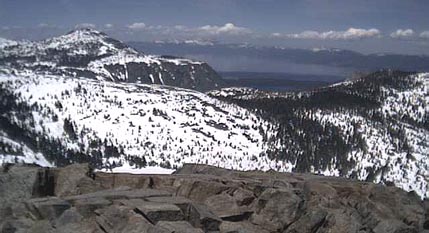 I had finally received the software replacement CD for my new, clearance rack, Ixla digital camera a few days ago, but inadvertently forgot to take up any memory cards for my main digital camera, a Nikon Coolpix. I remembered this as I approached the trailhead, and wondered about going into South Lake Tahoe, CA, to purchase one. I did have my newer, limited, no frills, Ixla digital camera as back-up, so resolved to see how it did. I had never used it in the snow, so speculated about how it would do.

After stopping at the USFS Information Station, we obtained a wilderness permit, and as usual, they could not tell us about parking or snow conditions. I enjoyed motoring up the highway, and the South Fork of the American was flowing nicely, and was so beautiful. We spotted some kayakers on our return home.

The Ralston Peak Trail parking was clear of snow, so I parked my vehicle. We began our hike by 10:22 a.m. We ran into crusty snow almost immediately, and I sought to follow the trail as I could see it. Our footprints in the snow proved an excellent guide for our descent. Finding some other hikers' and skiers' tracks, we followed them as they led the way I knew would go, and we climbed steadily and slowly. A hazard in the form of wells around rocks and brush caused us to be careful not to fall into one of them. We had ice axes for probes, and saw postholes of up to three feet that some hiker ahead of us had made.

The day was beautiful. I kept track of our times and progress. Bob is new to snow climbing, and wanted to practice technique. The snow was too mushy for self-arrest practice, and I could not even manage a standing glissade on our way down.

We encountered a snowshoer, who said he camped up on top with his skiing friends. The spring corn was a bit soft, but the skiers made nice telemarks as they later passed by us.

Soon, we came to the 8,500' elevation ridge, and I knew we had it in the bag. I was so worried that my cheaper digital camera would prove deficient at snow scenes, with a light meter that wouldn't be good enough. I cursed myself for forgetting to bring even a small memory card for my other, much better, camera

Seeing the summit rocks, we hiked on up. The snow up high was firm and solid for hiking. Coming to the top at 2:12 p.m., the clouds and light were gorgeous! 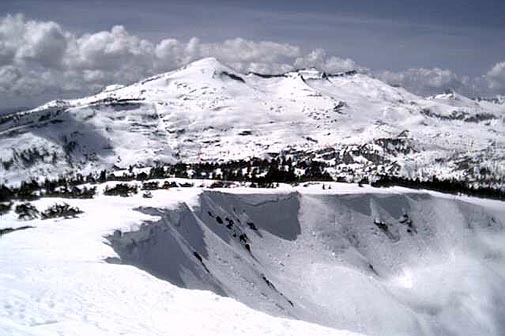 I prayed my new, bargain, digital camera would work for posting quality photos on this website. Ralston is not that important to me, so if there was a time to forget a memory card, this may have been it. These photos will be the only ones on this website not taken with a Nikon camera!

I had the camera set for normal, so the smaller .jpeg images would not be good enough for printing, of course.

The view was clear and fantastic. I wished I had brought my entire contingent of Nikon cameras!

We were both comfortable in just polyester T's, for quick drying. One could have taken a nap on top, the air was so still and pleasant. We both shot photos, and Bob enjoyed his first Sierra summit with me.

Starting down at 2:47 p.m., we hurried along. I plunge-stepped in my ascent tracks, to leave a nice "trail" for others to follow, perhaps. Having lots of time, we discussed dinner plans. As we got lower, the snow became mushier. I had advised Bob on this. It seemed even more difficult than climbing up at points!

I had to watch for undercut snow and moats. The brush created some hidden pockets, and we moved very slowly, not wishing to turn an ankle or break a leg! We got back into the trees, and I led us back nicely using our ascent tracks, and then caught the trail for the final 100 yards or so back to the trail's start. Shortcutting the dirt road, I was back to the car by 5:03 p.m.

We changed our clothes and sorted gear. I was off by 5:26 p.m., and some very light rain hit my windshield on our way past Strawberry, CA. Bob has a longer drive home, so I expedited my drinking and eating, and I stopped at a local Starbucks for his espresso to get him home.