Without much opportunity for peaks I want, I again joined my 80 year old buddy for his weekly conditioner. He remains true to his calling, climbing this peak over and over.

I met him at 5 a.m., and we quickly drove up U.S. 50. I found no blank, self-serve, day-use permits at the information station. I am told the rangers will listen, and as we are doing a day hike, there is no quota or fee required. The station doesn't open till 8 a.m., when we will be high on the mountain already! 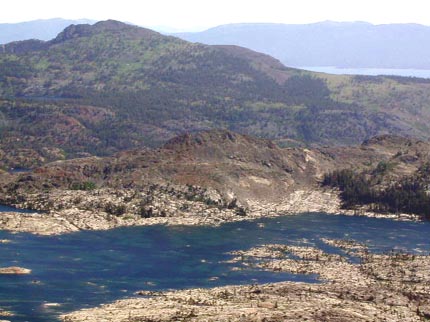 Because my pal says he likes hiking alone, I started ahead at 6:30 a.m. I knew it wouldn't be as warm as the last time, so wore long pants and two top layers to start. I tried to note the natural history, and saw a few pine drops. I spotted the lilies on my way back.

The bugs weren't so bad, today. There was a wind. I declined to use any repellant, and didn't slather on any sunscreen, either. I followed the use trail up, and was making good time. I thought to go slowly, since my buddy promised a long day for him, with a good nap. Then, as I saw the peak and how far I had come, chose to try for a decent time.

Lots of lupine, paintbrush, asters, and other flowers bloomed. Things were getting dry. The snowpatch from which I obtained water last time was still there, at about 9,000' elevation. I had carried three liters of water to start, plus a can of Diet Pepsi.

I thought to take a long time on the summit. Hoping for some company, we both never saw anyone all day. Ambling up the final rocks, I topped out at 10 a.m., three-and-a-half hours exactly after my start. A good time for 4,000' gain.

There was a good wind, so I donned a layer. No butterflies or flies this time. I shot photos, and made some movies with myself in them. I tried some high res image settings, and think to use a photo for my monitor background. I had lots of time, so could do a good job. I reviewed my photos and movies as I made them. 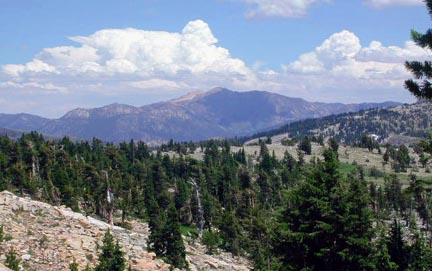 I looked down from the edges, and saw nothing new. I checked to see if my buddy was coming up. Finally, I worried that he had turned back, and was now waiting at the car. I began down at 12:30 p.m. My rock hopping brought me back to soil after 20 minutes. I then figured my pal was still coming up. I must have missed him.

Finding where he had left his pack, I piled some rocks to tell him that I had been there. After a rest, I shot more photos. Thunderheads were building up to the east. Looking back up the peak, I saw someone coming down. Since he wished to solo, and maybe take a nap, I left ahead of him. Enjoying the descent, I came back to the highway at 3:30 p.m.

Spending my time reviewing my images, I rested in the shade of a large fir tree. Cars and buses sped by. Then, after 5, he came out. I was glad to get my cold sodas, and offered a free buffet at South Shore. He reported getting indigestion from restaurants.

The 4,000' gain over 6 miles round trip is pretty right for us. I am not too sore or tired, and hoped maybe I would get an e-mail for a peak tomorrow.