Seeking another peak and to view fall colors, I signed up for this Great Basin Group activity. I drove up Highway 88 and through Hope Valley to be disappointed at the display. While colors were out, most of the aspen were still green. My usual stops merited a record shot, but the peak, if any is coming, will be another week or two.

Motoring up the Carson Valley, I noted good turning in some cottonwoods. The air was clear and the sky blue. Meeting the group at the Lake Tahoe Nevada State Park on Highway NV 28, I quickly readied my gear, and the twelve of us were off by 10:30 a.m. I suspected the display would be poor. Yes, many trees had not turned, and having looked at my photos from my last 4 visits here, I knew it would be still some time before the fall display would be impressive. 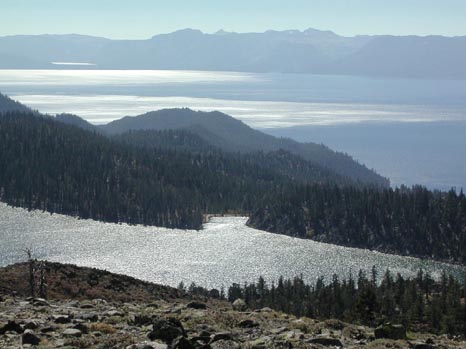 The leader, Ed, knew too it was early for prime colors, but we all can't have so many activities on a single few weekends. I am interested that the colors seem to come so late nowadays. The warmer temperatures and what else we don't know might be factors.

Our group shared the dirt road up North Canyon with many mountain bikers. I feared for some collision, but we are all experienced hikers, moving aside when bikers yell, "On your left (or right)."

We came to Marlette Lake after a short 300' drop in elevation, and the leader kept us moving. I wanted this new peak, as I have never gotten anyone interested in such an obscure summit. Continuing north, we intersected the Tahoe Rim Trail, and followed it up the east flank of the mountain. The trail wraps around to the left (south). Starting up the open slopes from the west side of the summit, I topped out by 1:50 p.m.

The views were clear, with the two lakes, Marlette and Tahoe, both reflecting sun. I searched for a register in the large cairn, and decided to leave some old nesting cans and a new book with pen. I also shot photos of the view, and after everyone had finished a late lunch, organized a group shot with the summit cairn, as the "proof" that we all made it.

We started down at about 2:25 p.m., and followed pretty much the same route back. Some soaked in the lake as we rested on the shore. I enjoyed the backlit colors in the profuse aspen groves along the road. 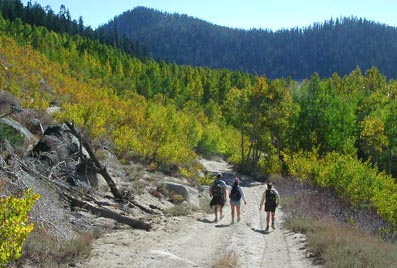 The hike back was quick, and we saw there was a new trail being built for hikers. This dirt road belongs to mountain bikers. I arrived at the State Park parking lot by 5:37 p.m. Some had beer and food. I left to make my longer drive home, noting what was new in Stateline and South Lake Tahoe.