Needing more exercise, and wishing to check out a new climbing buddy enlisted from the Net, I drove us to Lassen Volcanic National Park, this Tuesday morning, for my 5X. There was still plenty of snow, and we started hiking from the Lassen Peak Trail parking lot (8,500') by Noon. 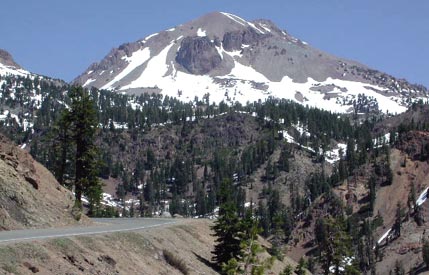 I was reminded of my very first peak climb here in 1970. Wishing some adventure from a monotonous sales job, I took off on a weekend to find myself going up this good trail, thanks to a few friendly motorists giving me a ride.

With my new companion, we easily hiked first up a snowy trail, and then climbed straight up on snow to where I knew the trail ran. The rules state to stay on the trail or on snow, when the trail is buried. I infringed a bit, climbing up a few yards of scree, to intersect the route of the graded trail. After a few hundred vertical feet of snow climbing, the trail is pretty much clear of snow. We briskly hiked up, running into about ten other hikers today.

Skiing the south face was a lone telemarker, making nice carved turns down the steep bowl. Too far away for any photos or movies, we watched as he skied out of sight behind a small ridge. Many ski tracks ran along the peak, although most tracks were simply traverses. It takes some daring to make S's, and it is a long slide down if you fall and can't stop!

I took many photos of the other peaks, as Brokeoff Mountain (9,235'), and marveled at the fairly clear view of the Northern Central Valley. The trail crosses some steep, short, snow banks, and I was glad I had an ice axe. Other hikers didn't, but the footsteps are mostly big enough so there isn't too much danger if care is used. 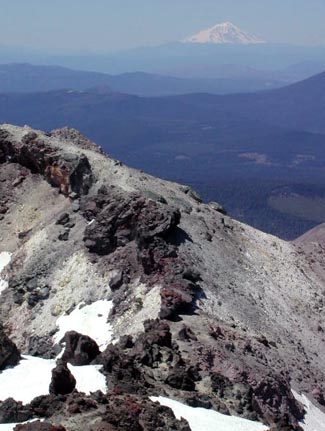 Views abounded in all directions. We could see southward to Sierra Buttes, and when we reached the top, Mt. Shasta, some 70 miles away. A use trail leads over to the craggy peak highpoint, where we summitted after a bit over two hours of hiking. I recalled I had once sprinted up the trail to top out after 55 minutes.

Snapping more photos of the view, I used my regular film camera with a 200mm lens to shoot Mt. Shasta, and other features about the view. A chipmunk scurried about, making a cute photo subject. We spoke at length with a couple other summiteers, and I relaxed, taking more photos as I could compose them. I tried for a few movie clips, but my Coolpix is getting non responsive, with a good shutter press not doing anything sometimes.

Moving to look down upon the Devastated Area, I saw many more ski tracks. Most or all of them simply traversed to a low ridge, with no S's that I could see. We had skied this route in 1996, one of the better trips of the Ski Mountaineers.

After some two hours on top, we headed down. I sought to allow my partner to practice self-arrests. A snow ramp along the east side of the switchbacking trail allowed for my standing glissades. I encouraged my pal to try a sit glissade further down, to then self-arrest. He was a bit wary of the steepness, and then couldn't get moving fast enough. He did perform a few stops, but his technique is still weak. Good snow climbing training is hard to come by, although the principles are simple. I feel sorry for people that will pay hundreds to learn, to find they don't like this sport!

We searched for more glissade runs, and came back to the cars at 5 p.m. The hike is some 4.5 miles each way, with 2,000' gain. Our total round trip was some 5 hours, including our 2 hours spent on top. I stopped to photograph some more views from the highway, and then the steaming fumaroles. I drove us home through beautiful forests on Highway 32.